What’s your favorite color? If you answered blue, you’re in good company. Blue outranks all other color preferences worldwide by a large margin.

No matter how much people enjoy looking at it, blue is a difficult color to harness from nature. As a chemist who studies the modification of natural products to solve technological problems, I realized there was a need for a safe, nontoxic, cost-effective blue dye. So my Ph.D. student, Barbara Freitas-Dörr, and I devised a method to convert the pigments of red beets into a blue compound that can be used in a wide range of applications. We call it BeetBlue.

Blue is strongly associated with nature, largely because it is reflected in the sky and on bodies of water. But compared to other colors, blue pigments are not commonly found in living organisms.

The feathers of many birds are blue, not because they produce a pigment, but because the microscopic structure of their feathers is able to filter light. This physical phenomenon is very interesting but difficult to adopt for common applications.

Plants seldom produce blue hues. When they do, their pigments rarely remain stable after extraction. The same is true for blue mushrooms like the indigo milky cap and other species that develop a blue stain when disturbed.

You might wonder how something red can be turned into something blue. One approach is to change the way its molecules absorb and reflect light.

The white light coming from your lamp contains a rainbow of colors, even though you cannot see them – without the use of a prism, that is. The surface of your red chair looks red because, at the molecular level, it is absorbing all the colors except red, which is reflected and eventually reaches your eyes.

The color of your chair would change from red to blue if you modified the molecular structure of its dye, making it reflect blue light instead of red. The secret is in the number of carbon atoms in the dye and how they are connected to each other.

Beets produce chemical compounds called betalains, which are natural pigments and antioxidants. The chemical structure of betalains can be modified to produce almost any hue. We realized that if we increased the number of alternating single-double bonds in betalain molecules, we could change their color from orange or magenta to blue.

Making blue dye with adequate intensity and light-fastness is difficult because it must absorb yellow and orange light efficiently. Solving this problem required lots of molecular tweaking.

My lab has been working with betalains for over 10 years to understand their function in nature and their unique chemical features, so it took only one experiment to produce BeetBlue. (It took more than two years to optimize the process, though.)

We broke apart the betalain molecules using alkaline water with a pH of 11. Then we mixed the resulting compound, called betalamic acid, with a commercial chemical compound called 2,4-dimethylpyrrole in an open vessel at room temperature. BeetBlue is formed almost instantly.

Because we changed the characteristic carbon-nitrogen chemical bond of betalains into a carbon-carbon bond, BeetBlue is a new class of pseudo-natural dyes we call quasibetalains.

The chemical synthesis of BeetBlue is fast and very simple. In fact, it is so simple that anyone can do it if all the chemicals are available.

BeetBlue dissolves easily in water and other solvents, maintains its color in acidic and neutral solutions, and may provide an alternative to expensive blue colorants that often contain toxic metals, which limit the scope of their applications.

Live zebrafish embryos as well as cultured human cells were not affected by BeetBlue. Although more experiments are necessary to make sure it is safe for human consumption, maybe you can dye your hair, customize your clothes or color your food in the future using a dye made from beets.

This work shows the importance of basic science for the development of technological applications. We did not patent BeetBlue. We want people to use it freely and understand, by interacting with nature in a different and sustainable way, the future can be bright. 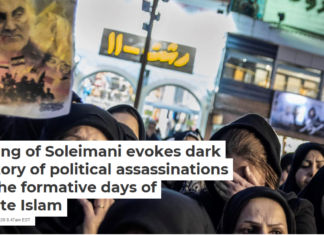 Staff Writer - January 11, 2020
Deina Abdelkader, University of Massachusetts Lowell Gen. Qassem Soleimani, who promoted the religious and political influence of the Iranian regime across the Middle East with...