For instance, one customer may tip generously even after receiving poor service. Another may verbally praise a server for providing excellent service, only to leave the restaurant without tipping.

Nonetheless, restaurant servers do notice patterns. Since many in the United States rely on tips for most (if not all) of their income, the custom of tipping presents servers with a powerful economic incentive to anticipate and react to customers’ tipping tendencies.

But our recent findings show that servers aren’t entirely motivated by their expected tips. This could change the way we interpret why servers treat certain customers the way they do, and could influence how they’re trained.

Let’s pick this apart a bit, with a focus on how it relates to race.

Of these, research has identified skin color as a particularly salient cue, one that triggers servers’ stereotypical expectations of receiving an adequate (more than 15%) or inadequate (less than 15%) tip.

In stark contrast, a mere 2% of servers perceived white customers to be below-average tippers.

This stereotype likely stems, in part, from servers’ actual experience. Research does show that racial and ethnic minorities are less familiar with dominant US tipping norms, which denote 15%-20% of the bill as an appropriate tip size. For this reason, they tend to tip their servers less than their white counterparts, who are more familiar with this norm.

As a result, white customers are more likely to get better service in full-service US restaurants.

However, this statement necessitates an important caveat, one that is either absent or minimized in prior scholarly and popular reports about how servers treat diners.

Specifically, just as humans are not motivated solely by economic concerns, restaurant servers are not motivated strictly by the desire to maximize tip earnings. For this reason, servers’ interactions with customers cannot be reduced to the tips that servers think their customers might (or might not) leave on the table.

For instance, a key finding from our recent research is that servers’ moral emotions and beliefs about how people deserve to be treated are as important – in some cases, more important – than economic considerations about customers’ tipping intentions.

Specifically, we found servers who have strong internalized moral convictions to treat all customers equally were less likely to report giving less effort when waiting tables of black and Hispanic customers. Notably, this held especially true among servers who perceived blacks and Hispanics to be poor tippers relative to whites.

In other words, for many servers, the moral motivation to provide equitable service to all clientele appears to effectively neutralize any economic motivation to discriminate against black and Hispanic customers, even when these servers stereotypically expect minority clientele to be poor tippers.

It’s important to note our findings indeed confirm what many already know from countless dining or serving experiences: that blacks, Hispanics and other customers of color are less likely than whites to receive optimal service while dining in full-service restaurants.

However, our research also provides some context to the dominant narrative on tipping. Because prior research indicates that blacks, on average, tip less than whites – and there’s the implication that servers are motivated only by economics – servers who put in less effort when waiting on tables of black customers are let off the hook.

But our research adds a layer to this. Yes, servers are motivated to maximize their tips. But they’re also motivated by deeply held emotions and beliefs about how customers deserve to be treated.

Our research thus suggests new potential solutions for eradicating race-based (and other) discriminatory service in the restaurant industry.

Some have called for eliminating the custom of tipping altogether, or reducing group differences in tipping behaviors by promoting awareness of the 15%-20% tipping norm. Both of these options currently seem unlikely (but not impossible).

For instance, in addition to highlighting the morally inappropriate nature of discriminatory service, programs might also underscore the illogical reasoning behind race-based service discrimination.

In other words, it’s unwise to treat tables differently, even if you’re expecting a lower tip. By providing the best possible service to everyone, servers can maximize their potential tipped income by increasing the chances of receiving an optimal tip from every customer – not just their white clientele.

Of course, striving to provide equitable service to all comes at a cost: it’s physically and emotionally exhausting to put on your best face for every customer. It can also be demoralizing when the same high-quality service is not consistently rewarded.

Fortunately, trying to offer the same high-quality service to every customer may be worth the effort. Servers will not only end their shifts with more money in their pockets, but they’ll also take comfort in knowing that giving all of their customers equally good service is the morally right thing to do. 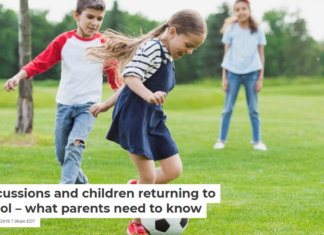 Staff Writer - September 14, 2019
Susan Davies, University of Dayton “Jamal” is a 16-year-old boy who sustained a concussion in a skateboarding accident in July. He was diagnosed in the...

There’s no evidence human pheromones exist – no matter what you...