In 1998, Lee Strobel, a reporter for the Chicago Tribune and a graduate of Yale Law School, published “The Case for Christ: A Journalist’s Personal Investigation of the Evidence for Jesus.” Strobel had formerly been an atheist and was compelled by his wife’s conversion to evangelical Christianity to refute the key Christian claims about Jesus.

Paramount among these was the historicity of Jesus’ resurrection, but other claims included the belief in Jesus as the literal Son of God and the accuracy of the New Testament writings. Strobel, however, was unable to refute these claims to his satisfaction, and he then converted to Christianity as well. His book became one of the bestselling works of Christian apologetic (that is, a defense of the reasonableness and accuracy of Christianity) of all time.

This Friday, April 7, a motion picture adaptation of “The Case for Christ” is being released. The movie attempts to make a compelling case for historicity of Jesus’ resurrection. As one character says to Strobel early in the movie, “If the resurrection of Jesus didn’t happen, it’s [i.e., the Christian faith] a house of cards.”

As a religious studies professor specializing in the New Testament and early Christianity, I hold that Strobel’s book and the movie adaptation have not proven the historicity of Jesus’ resurrection for several reasons.

Are all of Strobel’s arguments relevant?

The movie claims that its central focus is on the evidence for the historicity of Jesus’ resurrection. Several of its arguments, however, are not directly relevant to this issue.

For instance, Strobel makes much of the fact that there are over 5,000 Greek manuscripts of the New Testament in existence, far more than any other ancient writings. He does this in order to argue that we can be quite sure that the original forms of the New Testament writings have been transmitted accurately. While this number of manuscripts sounds very impressive, most of these are relatively late, in many cases from the 10th century or later. Fewer than 10 papyrus manuscripts from the second century exist, and many of these are very fragmentary.

I would certainly agree that these early manuscripts provide us with a fairly good idea of what the original form of the New Testament writings might have looked like. Yet even if these second-century copies are accurate, all we then have are first-century writings that claim Jesus was raised from the dead. That in no way proves the historicity of the resurrection.

What do the New Testament writings prove?

One key argument in the movie comes from the New Testament writing known as First Corinthians, written by the Apostle Paul to a group of Christians in Corinth to address controversies that had arisen in their community. Paul is thought to have written this letter around the year 52, about 20 years after Jesus’ death. In 1 Corinthians 15:3-8, Paul gives a list of people to whom the risen Jesus appeared.

These witnesses to the resurrected Jesus include the Apostle Peter, James the brother of Jesus, and, most intriguingly, a group of more than 500 people at the same time. Many scholars believe that Paul here is quoting from a much earlier Christian creed, which perhaps originated only a few years after Jesus’ death.

This passage helps to demonstrate that the belief that Jesus was raised from the dead originated extremely early in the history of Christianity. Indeed, many New Testament scholars would not dispute that some of Jesus’ followers believed they had seen him alive only weeks or months after his death. For example, Bart Ehrman, a prominent New Testament scholar who is outspoken about his agnosticism, states:

“What is certain is that the earliest followers of Jesus believed that Jesus had come back to life, in the body, and that this was a body that had real bodily characteristics: It could be seen and touched, and it had a voice that could be heard.”

This does not, however, in any way prove that Jesus was resurrected. It is not unusual for people to see loved ones who have died: In a study of nearly 20,000 people, 13 percent reported seeing the dead. There are a range of explanations for this phenomenon, running the gamut from the physical and emotional exhaustion caused by the death of a loved one all the way to the belief that some aspects of human personality are capable of surviving bodily death.

In other words, the sightings of the risen Jesus are not nearly as unique as Strobel would suggest.

A miracle or not?

But what of the 500 people who saw the risen Jesus at the same time?

First of all, biblical scholars have no idea what event Paul is referring to here. Some have suggested that it is a reference to the “day of Pentecost” (Acts 2:1), when the Holy Spirit gave the Christian community in Jerusalem a supernatural ability to speak in languages that were unknown to them. But one leading scholar has suggested that this event was added to the list of resurrection appearances by Paul, and that its origins are uncertain.

Second, even if Paul is reporting accurately, it is no different from large groups of people claiming to see an apparition of the Virgin Mary or a UFO. Although the precise mechanisms for such group hallucinations remain uncertain, I very much doubt that Strobel would regard all such instances as factual.

Strobel also argues that the resurrection is the best explanation for the fact that Jesus’ tomb was empty on Easter morning. Some scholars would question how early the empty tomb story is. There is significant evidence that the Romans did not typically remove victims from crosses after death. Therefore, it is possible that a belief in Jesus’ resurrection emerged first, and that the empty tomb story originated only when early critics of Christianity doubted the veracity of this claim.

But even if we assume that the tomb really was empty that morning, what is there to prove that it was a miracle and not that Christ’s body was moved for uncertain reasons? Miracles are, by definition, extremely improbable events, and I see no reason to assume that one has taken place when other explanations are far more plausible.

Who are the experts?

Apart from all of these other weaknesses in Strobel’s presentation, I believe that Strobel has made no real effort to bring in a diversity of scholarly views.

In the movie, Strobel crisscrosses the country, interviewing scholars and other professionals about the historicity of Jesus’ resurrection. The movie does not explain how Strobel chose which experts to interview, but in his book he characterizes them as “leading scholars and authorities who have impeccable academic credentials.”

Yet the two biblical scholars who feature in the movie, Gary Habermas and William Lane Craig, both teach at institutions (Liberty University and Biola University, respectively) that require their faculty to sign statements affirming that they believe the Bible is inspired by God and is free of any contradictions, historical inaccuracies or moral failings. For example, the Liberty University faculty application requires assent to the following statement:

“We affirm that the Bible, both Old and New Testaments, though written by men, was supernaturally inspired by God so that all its words are written true revelation of God; it is therefore inerrant in the originals and authoritative in all matters.”

The overwhelming majority of professional biblical scholars teaching in the United States and elsewhere are not required to sign such statements of faith. Many of the other scholars he interviews in his book have similar affiliations. Strobel has thus drawn from a quite narrow range of scholars that are not representative of the field as a whole. (I estimate there are somewhere around 10,000 professional biblical scholars globally.)

In an email reply to my question about whether most professional biblical scholars would find his arguments for the historicity of Jesus’ resurrection to be persuasive, Strobel said,

As you know, there are plenty of credentialed scholars who would agree that the evidence for the resurrection is sufficient to establish its historicity. Moreover, Dr. Gary Habermas has built a persuasive “minimal facts” case for the resurrection that only uses evidence that virtually all scholars would concede. In the end, though, each person must reach his or her own verdict in the case for Christ. Many things influence how someone views the evidence – including, for instance, whether he or she has an anti-supernatural bias.“

In response to Strobel, I would say that if he had asked scholars teaching at public universities, private colleges and universities (many of which have a religious affiliation) or denominational seminaries, he would get a much different verdict on the historicity of the resurrection.

Christian apologists frequently say that the main reason that secular scholars don’t affirm the historicity of the resurrection is because they have an “anti-supernatural bias,” just as Strobel does in the quote above. In his characterization, secular scholars simply refuse to believe that miracles can happen, and that stance means that they will never accept the historicity of the resurrection, no matter how much evidence is provided.

Yet apologists like Gary Habermas, I argue, are just as anti-supernaturalist when it comes to miraculous claims outside of the beginnings of Christianity, such as those involving later Catholic saints or miracles from non-Christian religious traditions.

I have very little doubt that some of Jesus’ followers believed that they had seen him alive after his death. Yet the world is full of such extraordinary claims, and “The Case for Christ” has provided, in my evaluation, no truly compelling evidence to prove the historicity of Jesus’ resurrection. 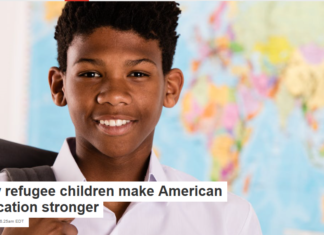 Staff Writer - June 21, 2018
Shawna Shapiro, Middlebury College In recent years, there has been a great deal of public angst about refugee resettlement in the U.S. and Europe. Americans...