The United States is not trying to contain China’s rise. But you would never know it from reading Chinese domestic media, which overwhelmingly embraces this theory to explain America’s resistance to China’s military and territorial expansion in Asia.

To regular readers of Chinese discourse, this containment narrative isn’t new. What is new is that it is spilling over into the English language information space, in places such as this article by Australia-based scholar Xu Qinduo.

It’s a positive sign that the two sides are talking more directly about their strategic fears. But the irony is that this popular misattribution of America’s motives may soon lead Washington to reconsider its engagement policy – to China’s detriment.

As part of an ongoing effort to understand how the Chinese frame matters of strategy, I recently analyzed over 500 translated documents reflecting Chinese internal discourse on regional conflict. The single unifying narrative across all areas was the idea that the US is working to prevent China’s prosperity or “contain” China’s rise.

But to American strategists, “containment” has a very specific meaning: a comprehensive political, economic, and military strategy to deny an enemy nation freedom of access to the international system. Containment, when successful, leads to isolation and even political collapse. The simplest way to show that there is no US containment policy toward the People’s Republic of China (PRC) is to remember when there was.

When you’re being contained, you know it

During the 1950s and 1960s, Washington blocked PRC access to development loans, armed and trained ethnic insurgencies to destabilize its government, conducted intelligence overflights from Taiwan, and prevented Beijing from claiming a seat at the United Nations.

Its partners and allies denied the PRC diplomatic recognition and sharply limited opportunities for trade, dialogue or cultural exchange. China remained a poor, isolated country with little political significance – much like North Korea or Cuba today.

Chinese commentators like to remind their readers that today’s China is not the weak China of 40 years ago. Indeed it isn’t – neither China’s situation, nor US policy, bears any resemblance to that past.

Last year alone, the United States imported US$466 billion in Chinese goods and welcomed more than 274,000 Chinese students to US universities. One out of every three foreign students now holds a Chinese passport.

If training an entire generation of engineers, scientists and programmers is “containment,” it’s possibly the worst containment policy ever.

The containment narrative confuses a policy of preventing China’s prosperity with a policy of influencing China’s strategic choices. The US is not selfless, but for the past 40 years it has been pursuing a policy of enlightened self-interest.

Through engagement, the US seeks to shape China’s strategic culture away from conspiratorial, zero-sum thinking and toward shared responsibility. It puts constraints on the exercise of Chinese power because those constraints are the cost of admission to the system it created. It may criticize Chinese policies, but criticism is not containment.

The worst that can be said is that the US has attempted to create structures (like the TransPacific Partnership) that are difficult for China to join, or infrastructure (like military bases in the Pacific) that would constrain Chinese options in a conflict. These may complicate China’s strategic calculations, but fundamentally don’t prevent it from pursuing its interests or achieving prosperity.

A turn away from engagement?

If the US isn’t attempting to contain China, why popularize the idea that it is? One reason is that it may be useful inside China to cultivate an enduring sense of victimhood.

If you promote the idea that the US is set on thwarting China’s rise, then any pushback on China’s actions becomes proof of a covert hostility. But accommodating China’s expanding claims would hardly demonstrate US sincerity – only that it was forced recognize China’s legitimate interests in the face of hard power. Inside the structure of this narrative, either confrontation or accommodation justifies further expansion and military capability.

Faced with this dilemma, the danger for China is that US policymakers start to reexamine whether the logic of engagement still holds. For the first time in decades, American analysts are questioning America’s basic policy.

“Washington is giving up on Beijing becoming a stakeholder in the present global order,” writes the Financial Times.

“Washington needs a new grand strategy toward China that centers on balancing the rise of Chinese power rather than continuing to assist its ascendancy,” say Robert Blackwill and Ashley J Tellis in a recent report for the Council on Foreign Relations.

Even now, no one is seriously talking about containment. But a US decision to reconsider engagement as the foundation for future relations may be difficult to reverse, and could have a significant impact on China’s interests down the road. Tragically, China’s cultivated conspiracy could end up producing a much more hostile policy than the one that actually exists now.

David B Millar is Instructor of International Relations at Texas A&M University . 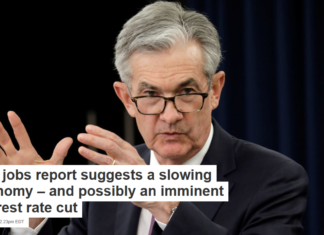 Weezer’s cover album: Is the rock band honoring or exploiting the...

5 strategies employers can use to address workplace mental health issues