Torrential storms have been coursing through much of Texas in recent days, prompting massive flash flooding that has swept away entire homes and left wakes of devastation.

Floodwaters continue to rise, so it will be days if not weeks before we can calculate the final costs, both in terms of life and property. But regardless, many will be turning to the federal government’s National Flood Insurance Program (NFIP) for help – it’s the only way to insure a property against damage from flooding. Unfortunately, it’s broke – and its very nature encourages development that makes each flood more damaging than the last.

While that doesn’t mean residents of Texas and elsewhere suffering from flood-related damages won’t get assistance, it does show that a reckoning is coming – either for policyholders or taxpayers. Without reforms to the NFIP that raise more money from premiums, its financial deficit will continue to widen and pile of debt will grow unchecked, eventually requiring a taxpayer-funded bailout to repair the damage.

Policyholders are likely unaware of the underlying finances, as the program has generally borrowed to pay off previous claims rather than raising rates.

Furthermore, the program encourages development of areas prone to flooding – while discouraging investment in modest protections – thereby leading to both costlier damages and environmental degradation. The point being that left largely alone, the floodplain provides essential protection against inland flooding and natural habitats for diverse wildlife.

Reforming the program to force property owners who choose to live in areas ripe for flooding to bear the real costs of ownership would help shore up the program and limit development on the floodplain, ensuring towns and cities throughout the US suffer less when waters rise.

The NFIP, a government program that provides flood insurance to property owners across the United States, is more than US$20 billion in debt and unlikely to ever pay off its creditors.

Under the program, the government requires anyone with a federally backed mortgage to purchase flood insurance if they live on a 100-year floodplain – about 16 million people, according to a 2010 estimate from the National Oceanic and Atmospheric Administration.

Congress created the NFIP in the late 1960s after several large floods exposed homeowners and businesses without flood insurance to billions of dollars in losses. Insurance companies had not offered flood insurance through the private market since the 1920s. During the intervening years, virtually no insurance for flooding was available to homeowners, and typical home insurance policies did not cover flood damage. As a result, following a flood, homeowners were left to pay for damages themselves.

While the program has helped many flood victims, it also encourages development in coastal areas because the premiums are below what the risk-adjusted market rate would be and the US government essentially writes blank checks to cover losses. This ends up increasing the damages and loss of life from hurricanes and severe coastal storms. The program also encourages development in other flood basins, also increasing damage due to flooding.

Some areas have flood maps that dramatically understate the flood risk. The director of the Federal Emergency Management Agency (FEMA), which creates those maps, has said that only half are accurate and has described the NFIP’s finances as “unsustainable.”

And the latest report from the Government Accountability Office called the program “by design, not actuarially sound.”

The NFIP is not a financially sound way to insure against floods and natural disasters because it collects in premiums far less than it pays out in claims.

The program extends subsidized rates to policyholders who meet certain conditions, including those who own property developed before 1974. The Federal Emergency Management Agency, the agency that manages the NFIP, also provides discounts to areas protected by levees or other physical barriers.

A 2011 GAO report found more than one in five policyholders receive a subsidized policy, usually with a discount of 50% to 60%. Other policyholders partially pay for these subsidies through increased premiums on their own policies.

As a result, the NFIP is running a cumulative loss. To cover the losses, the NFIP borrows from the US Treasury, which in turn taps investors around the world to lend it more money, contributing to the national debt. At the close of 2014, the NFIP was $23 billion in the red.

While larger than other flood events, these storms represent the known peak flood risk. Accordingly, these peaks should be accounted for in assessing the flood risk and associated premiums. As global climate change affects weather patterns, hurricanes and overland heavy rainfall storms are increasing in intensity, and the associated claims paid by the NFIP are rising.

The NFIP also ends up encouraging overdevelopment on the floodplain.

The program subsidizes development there by transferring the costs away from current developers and property owners and to either future owners or taxpayers. Repeatedly flooded properties also receive an indirect subsidy through the frequent rebuilding costs, which are absorbed by the NFIP and not the property owner.

Such development reduces overall flood protection. The floodplain, through beaches and barrier islands, helps absorb the impact of rising waters. Building immediately adjacent to water reduces the strength of these natural barriers.

Further, development removes plant life and natural grasses that prevent erosion. As beachfront erodes, its protective quality declines. Non-coastal areas are affected, too, when marshes and bogs are filled to provide arable or buildable land.

Returning these areas to their natural state and leaving them there would reduce overall flood damage. When coastal barriers and inland wetlands are able to absorb increase groundwater flow, nearby areas are naturally protected. Natural flood defenses will be increasingly important as the climate change causes sea levels to rise and increases the severity of storms.

Even before Sandy, policymakers recognized the need to fix the NFIP’s finances. In 2012, Congress passed the Biggert-Waters Flood Insurance Reform Act, which required the NFIP to modernize the program by boosting premiums to levels that match the risks. Thus, the NFIP would move toward financial stability.

Biggert-Waters also mandated updates to the flood insurance rate maps that determine the cost of flood insurance for property owners, to more fairly and accurately allocate premiums. Rate changes were to be phased in, with more than half of subsidized policies continuing to receive some level of discount.

But owners whose properties went from lower- to higher-risk status were not too pleased when their premiums increased and reeled when notified of the higher rates they’d have to pay. And many were simply unable to afford them.

As a result, these policyholders successfully pressured Congress in 2014 to roll them back. The Homeowner Flood Insurance Affordability Act restored subsidies to grandfathered properties and capped the amount insurance premiums could increase. The Act also required FEMA to study flood insurance affordability.

The risk transfer through reduced rates and the overdevelopment of the floodplain deliver a one-two punch to taxpayers and the environment unless reforms are made that require developers and owners to bear the true cost of building in those areas.

Biggert-Waters addressed these issues by requiring flood insurance policyholders to pay more of their share of the flood risk, but the law’s dilution means taxpayers are still left holding the bill after subsidizing property owners to remove vital flood protection along the coasts.

Congress still has the opportunity to stabilize the NFIP. Lawmakers should act soon to again allow the program to raise premiums to cover the true costs of insurance and gradually reduce the debt.

Further, the NFIP should cut program subsidies. By exposing property owners to the full cost of their building decisions, property owners would make better development decisions on the floodplain. That would leave us all a little better insured, against both inland flooding and getting socked with another bailout. 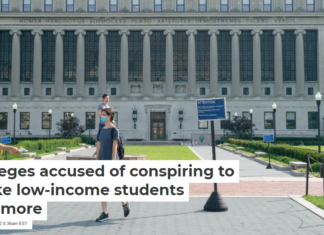 Staff Writer - January 18, 2022
Robert Massa, University of Southern California Sixteen universities – including six in the Ivy League – are accused in...