Customers spent more buying stuff from companies that engaged in corporate social responsibility than those that didn’t – as long as those do-gooder efforts actually addressed damage the businesses caused.

That’s the main takeaway of a new study I conducted with three fellow marketing scholars.

My colleagues and I tracked what happened following the announcements of 80 initiatives, such as social service donations and switching to plant-based plastics, tied to 55 brands. The companies made packaged goods, ranging from razors to ketchup.

We compared their sales with the sales of similar brands that didn’t announce such initiatives at that time. Our data began one year before and ended one year after that news broke. We controlled for other factors, such as prices, advertising budgets and negative press coverage.

We then grouped these efforts into three categories.

We used used the term “correcting actions” to refer to companies that tried to make up for harmful past environmental or social practices by changing related operations, such as by reducing their carbon emissions. “Compensating actions” entail a company’s donating money to offset the damages it caused but not altering its operations. And “cultivating actions” involve a business’s making a donation or getting employees to volunteer for programs that have nothing to do with its core business or its past harmful practices.

Sales rose by an average of 1% during the year after announcing correcting actions and 3% for compensating ones. The cultivating actions unrelated to a company’s own operations had the opposite effect: Sales fell an average of 3.5%.

We then conducted laboratory experiments with 507 people. They received background information about brands we made up that had made correcting, compensating or cultivating actions. We asked them to rate how likely they would be to buy those products.

We found consumers perceive corporate social responsibility initiatives differently depending on how sincere they perceive the companies to be. Because they view cultivating efforts as less sincere, people are more likely to purchase stuff from brands doing corrective and compensating actions.

As consumers grow more aware of the harm the private sector can do, companies have more incentives to engage in corporate social responsibility.

That’s perhaps why Fortune 500 companies alone spend roughly US$20 billion per year on these efforts. At the same time, the consequences of many corporate operations, which may include pollution or meager pay for workers in low-income countries with weak labor laws, are often passed on to society.

We believe our study is one of the first to cross-reference sales data with corporate social responsibility initiatives to see whether these actions affect consumer behavior.

Our findings suggest that when companies engage in acts of corporate social responsibility, they should choose actions that are related to the harm caused by their core business operations. They should also take care in communicating their goals and emphasizing accountability – particularly related to environmental issues.

We focused strictly on consumers. Figuring out whether employees, shareholders and the public respond differently to corporate social responsibility actions that are tied to correcting, compensating or cultivating efforts is important too.

I’m currently conducting a related study with two other colleagues that compares how shareholders and Twitter followers respond differently to corporate social responsibility efforts. Those future findings may further illuminate what socially responsible acts mean for a company’s bottom line. 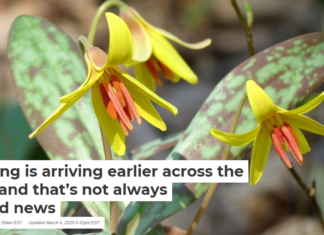 Staff Writer - March 4, 2020
Theresa Crimmins, University of Arizona Across much of the United States, a warming climate has advanced the arrival of spring. This year is no exception....

How Nigeria’s new competition law will benefit the economy – and...