Every fall and winter, viral respiratory illnesses like the common cold and seasonal flu keep kids out of school and social activities. But this year, more children than usual are ending up at emergency departments and hospitals.

In California, the Orange County health department declared a state of emergency in early November 2022 due to record numbers of pediatric hospitalizations for respiratory infections. In Maryland, emergency rooms have run out of beds because of the unusually high number of severe respiratory syncytial virus, or RSV, infections. So emergency departments there are having to refer patients across state lines for care.

In the U.S., the winter respiratory virus season started earlier than usual this year. Since peak infections usually occur in late December or January, this uncharacteristic early wave suggests that the situation could get much worse for people of all ages, particularly children.

We are epidemiologists with expertise in epidemic analysis for emerging disease threats, including respiratory infections. We watch patterns in these infections closely, and we pay particular attention when the patterns are unusual. We’ve grown increasingly concerned about the amount of pediatric hospitalizations over the last few months and the pattern that is emerging.

In early November, the Centers for Disease Control and Prevention issued a health advisory about increased activity in respiratory infections – especially among children. The CDC and other health experts are warning of the so-called “triple threat” of respiratory illness from RSV, influenza – or the seasonal flu – and COVID-19.

The underlying reasons for the convergence of these viruses and the increase in infections so early in the season are not yet clear. But health experts have some clues about contributing factors and what it could mean for the coming months. https://www.youtube.com/embed/gzkZeb-wW8k?wmode=transparent&start=0 As of mid-November 2022, a children’s hospital in Buffalo, N.Y., had already admitted more than double the number of respiratory syncytial virus patients than in the entire 2019-2020 respiratory season.

When it comes to COVID-19, 2022 is expected to usher in another winter wave of infections, similar to patterns seen in 2020 and 2021. Previous winter surges stemmed from a combination of factors, including the emergence and spread of new viral variants, more people gathering indoors rather than distanced outside, and people coming together for the holidays.

But unlike previous pandemic winters, most COVID-19 precautions – such as using masks in public areas or avoiding group activities – are more relaxed than ever. Together with the looming threat of new variants, it is difficult to predict how big the next COVID-19 wave could be.

And while the seasonal flu has proved somewhat unpredictable during the COVID-19 pandemic, it nearly always hits during late October. Flu season also arrived about a month early and in greater numbers than in recent history. By our read of the data, pediatric flu hospitalizations are nearing 10 times what has been seen for this time of year for more than a decade.

RSV infections tend to follow a similar seasonal pattern as the flu, peaking in winter months. But this year, there was an unexpected summer wave, well before the start of the typical fall respiratory virus season.

But RSV can be a formidable respiratory infection with serious consequences for children under 5, especially infants. It is the most common cause of lower respiratory infections in young children, and more severe illnesses can lead to pneumonia and other complications, often requiring hospitalization.

Why children are particularly at risk

Children, especially young children, tend to get sicker from flu and RSV than other age groups. But infants younger than 6 months old stand to suffer the most, with nearly double the risk of RSV-related death compared to other children younger than 5. COVID-19 hospitalization rates are also four to five times higher for infants than older children.

One reason the youngest children are at greater risk is that their immune systems are not yet fully developed and don’t produce the robust immune response seen in most adults. What’s more, infants younger than 6 months – who are most at risk of severe disease – are still too young to be vaccinated against influenza or COVID-19.

These viruses present challenges on their own, but their co-circulation and coinciding surges in infections create a perfect storm for multiple viruses to infect the same person at once. Viruses might even act together to evade immunity and cause damage to the respiratory tract.

Such co-infections are typically uncommon. However, the likelihood of co-infection is substantially higher for children than adults. Co-infections can be difficult to diagnose and treat, and can ultimately lead to greater disease severity, complications, hospitalization and death.

Factors behind the triple threat

There are a few reasons why the U.S. may be seeing a surge in pediatric respiratory infections. First, COVID-19 protection strategies actually help prevent the transmission of other respiratory pathogens. School and daycare closures likely also minimized exposures children normally have to various respiratory viruses.

These and other efforts to prevent the spread of COVID-19 seem to have suppressed the broad circulation of other viruses, including influenza and RSV. As a result, the U.S. saw an overall drop in non-COVID respiratory infections – and an almost nonexistent flu season in the winter of 2020.

The decreased viral activity means that children missed out on some exposures to viruses and other pathogens that typically help build immunity, particularly during the first few years of life. The resulting so-called “immunity debt” may contribute to an excess of pediatric respiratory infections as we continue into this season.

To further complicate the picture, the changing nature of viruses, including theemergence of new COVID-19 variants and the natural evolution of seasonal influenza viruses, means that we could be seeing a unique combination of particularly transmissible strains or strains that cause more severe illness.

The early surge in respiratory infections with high rates of hospitalization highlights the importance of prevention. The best tool we have for prevention is vaccination. Vaccines that protect against COVID-19 and influenza are available and recommended for everyone over 6 months of age. They have been shown to be safe and effective, and they can and do save lives.

In particular, most recent data on the newly updated bivalent COVID-19 booster vaccine suggests that it produces a more rigorous antibody response against the current circulating omicron variants than the original COVID-19 vaccines.

The best way to protect infants younger than 6 months old against flu and COVID-19 is by vaccination during pregnancy. When a pregnant mother is vaccinated, maternal antibodies cross the placenta to the baby, reducing the risk of COVID-19 hospitalization in young infants by 61%. Vaccination of other caregivers, family and friends can also help protect infants.

Other preventive measures, like hand-washing, covering sneezes and coughs, staying at home and isolating when sick, can help to protect the community from these viruses and others. Paying attention to local public health advisers can also help people to have the most up-to-date information and make informed decisions to keep themselves and others – of all ages – safe. 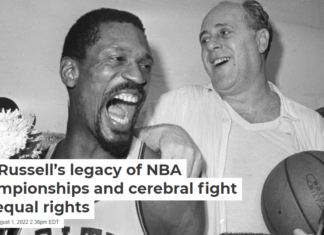 Staff Writer - August 1, 2022
Aram Goudsouzian, University of Memphis On May 1, 1968, Bill Russell led the Boston Celtics to another NBA championship,...