On Jan. 21, in a collective demonstration of historic proportions, millions of women marched in Washington, D.C. and other cities around the world in support of key policy issues such as reproductive rights, equal pay for equal work and support for balancing work and family.

These marches demonstrated the empowerment of women and a widespread commitment to ensuring that women’s rights are furthered – and not eroded – by policymakers. But policy is not the only arena that affects women’s freedoms and well-being.

If equality begins at home, how much progress has been made toward equality in parenting?

The day after the march, The New York Times published an article that described a scene in Montclair, New Jersey, showing what happened when women were absent from town. The article narrated how women’s absence resulted in empty yoga classes, Starbucks cafes populated by men and hapless fathers struggling to juggle children’s weekend schedules.

In other words, as its critics pointed out, the article reinforced the outdated notion that mothers are the primary parents and fathers are (at best) mere helpers and incapable of caring for children independently.

My research focuses on the sharing of parenting between mothers and fathers in dual-earner couples – a group that is most likely to hold gender egalitarian beliefs. In this group, successfully balancing work and family makes some degree of shared parenting necessary.

My research and that of others shows that even though significant progress has been made toward gender equality in parenting, more subtle inequalities remain. Many fathers – even those in the households most likely to have progressive views on parenting – have not achieved equality with mothers in key areas.

Men’s parenting time has increased, but women’s has too

It is true that today’s fathers are more involved in parenting children than ever before. Over the past half-century, fathers in America nearly tripled their child care time from 2.5 hours per week in 1965 to seven hours per week in 2011.

This gap starts in the earliest months of parenthood. Using detailed daily records of new parents’ activities, my team’s research has shown that working mothers take on a greater share of the child care burden for a new baby than do fathers. In fact, new mothers allocated twice as much of their available time to routine child care activities than fathers.

These differences cannot be explained away by differences in paid work hours or breastfeeding.

So, the question remains, why hasn’t fathers’ greater involvement substituted for mothers’ involvement, thus reducing the parenting burden on women?

What has happened is that middle-class families now follow the norm of “intensive parenting,” which dictates that parenting should be child-centered, guided by expert advice and costly in terms of time, money and emotional investment in order to produce the most successful child possible.

Picture modern parents scouring bookstores for the latest parenting manual and preschool math workbooks, fretting over their toddler’s picky eating habits and overloading their weekly schedules with children’s activities and playdates. This pressure to parent intensively does not fall equally on middle-class mothers and fathers, however. Because motherhood remains an idealized role, it is mothers who experience the greatest pressure to meet these unrealistic parenting standards.

Thus, even fathers who are highly involved coparents may experience parenting primarily in the company of children’s mothers and more rarely on their own.

Mothers multitask more than fathers do. A recent study showed the size of this difference: mothers in dual-earner families spent 10 more hours per week multitasking than did fathers.

Although multitasking may be efficient, frequent multitasking contributes to greater day-to-day stress for mothers compared to fathers. Mothers who did more multitasking at home felt more frustrated, irritated and anxious. They said they felt more often rushed or pressed for time.

Thus, if fathers are less likely to multitask child care and housework, some women may have returned from the march to weekend laundry or grocery shopping left undone, thus beginning the new work week with an additional burden.

Mothers do more managing and organizing

This aspect of parenting is especially challenging to study, because much of this work takes place inside the parent’s head. Research that has surveyed or interviewed parents about who takes responsibility for the managerial and organizational aspects of parenting indicates that mothers take greater responsibility than fathers.

In fact, fathers’ involvement in this component of parenting has lagged behind gains in their direct involvement in caring for their children. In other words, mothers are more likely to make child care arrangements, schedule doctors’ appointments and sign the permission slips. Mothers remember and mothers remind.

Perhaps some mothers who traveled to the D.C. march might want to recall, how many reminders and to-do lists for children and fathers did they need to leave behind? And how many text messages were exchanged with fathers about where to find a missing sport or dance class accessory?

The truth, as made evident through The New York Times article, is: We still have a way to go to achieve equality in parenting. 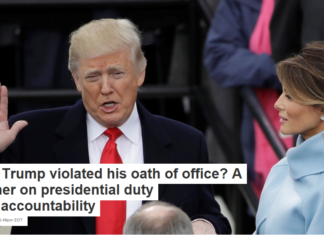