In his first full week in office, President Donald Trump unleashed a whirlwind of actions that have deep ramifications for U.S. trade. Although critics have labeled the actions “unpredictable,” “isolationist” and “chaotic,” they provide an instructive outline of his new trade policy.

The president began the week by signing a memorandum directing the United States’ withdrawal from the Trans-Pacific Partnership (TPP). Later in the week, he met with British Prime Minister Theresa May to discuss greater bilateral cooperation, including a post-Brexit trade deal.

His new envoy to the United Nations, Nikki Haley, called for reform of that organization. She even issued a blunt warning: “For those who don’t have our backs, we’re taking names.”

As if these developments were not complicated enough, President Trump signed an executive order on Friday requiring the “extreme vetting” of citizens of seven Muslim majority countries seeking to enter the United States. The related travel ban sparked protests at airports around the country.

While it still remains unclear how President Trump’s trade policy will evolve, his first full week has provided some good indications of what to expect in the next four years. The new policy is also more nuanced and consistent than his critics have given him credit for.

As shown by his handling of the TPP, the United Nations and Anglo-American relations, President Trump harbors a strong distrust of the existing multilateral system. This system covers not only the United Nations, the World Trade Organization (WTO) and the World Bank but also regional efforts such as the TPP, the Transatlantic Trade and Investment Partnership (TTIP) and the North American Free Trade Agreement (NAFTA).

This shift away from multilateralism is a major departure from the Obama administration. While President Barack Obama went out of his way to team up with other nations, President Trump wants none of this.

Instead, he prefers bilateral negotiations that will maximize the United States’ bargaining strengths, drawing on the country’s superpower status and 300-million-strong market. Such one-on-one negotiations will also ensure a dedicated focus on those core issues that are important to both sides.

Although some commentators and pundits may characterize this changing approach as isolationist, the presidential memorandum concerning TPP withdrawal made it clear that the administration will continue to negotiate trade deals with other members of the partnership. Those deals will just have to be negotiated through the bilateral route.

Preference for the ‘John Wayne’ approach

Going hand in hand with a renewed emphasis on bilateral negotiations is the administration’s preference for hard bargaining and ultimatums. Stemming from President Trump’s penchant for negotiation from strength, this preference will likely result in a lot of saber-rattling between the United States and its trading partners.

While the embrace of this “John Wayne” approach will undoubtedly make the United States unpopular within the international community, hardball tactics will enable the country to obtain more of its demands while offering fewer concessions. These tactics, in turn, will allow President Trump to keep his campaign promise of putting America first.

At times, the administration will surely make missteps by overplaying its hand. For example, President Trump’s repeated insistence that Mexico will pay for his proposed border wall appears to have backfired after Mexican President Enrique Peña Nieto canceled a previously scheduled face-to-face meeting. The two eventually settled for a phone conversation.

For countries with complicated politics such as China and India, strong-arm tactics and hard bargaining could also complicate the negotiations. In these countries, things could easily get out of control with the increasingly nationalistic populace.

If the Chinese and Indian populace fails to get the correct signals and overreacts, their leaders may find their hands are tied, even if President Trump offers to provide follow-up private clarifications.

For China especially, such complications could arise if the administration insists on naming the country a currency manipulator and slapping its imports with a 45 percent tariff. Such drastic measures could not only lead to a mutually destructive trade war but also undesirable WTO complaints or even penalties against the United States.

Under the Trump administration, trade deals are unlikely to be developed through a region-based approach, whether through the bilateral or multilateral route. Within Asia, for example, Cambodia and Laos are just not as important as Japan and South Korea.

Instead, the deals the administration negotiates are likely to be more opportunistic. They could emerge in Asia, Europe and the Middle East at the same time without the constraints imposed by a region-based trade policy.

This nongeographical yet ironically global approach stands in sharp contrast to the Obama administration’s “pivot to Asia.” President Obama was not only eager to rewrite the trade rules for the Asia Pacific region, but he emphasized the region’s importance by sending his first secretary of state, Hillary Clinton, to Asia on her first state visit.

For the Trump administration, it will still be interesting to see where newly confirmed Secretary of State Rex Tillerson will visit first. That trip, however, may not be as indicative of the administration’s policy focus as Secretary Clinton’s was.

The Trump administration’s new trade policy is still at its infancy. So it will continue to evolve. A raging debate concerning its expediency and sustainability will also continue, especially in this highly polarized post-election environment.

Nevertheless, this policy is not as “unpredictable” and “chaotic” as many critics have claimed. Instead, the policy is more nuanced and consistent. It can be traced back to not only the president’s campaign promises but also his early open letters in the mass media.

For those who strongly believe in the multilateral trading system, which dates back to the end of the Second World War, his policy will undoubtedly undermine the stability of this system. This policy could also lead to new tensions and confrontations in the international trade arena.

We will just have to wait and see as President Trump’s new trade policy slowly takes shape.

Peter K. Yu, Professor of Law and Co-Director of the Center for Law and Intellectual Property, Texas A&M University 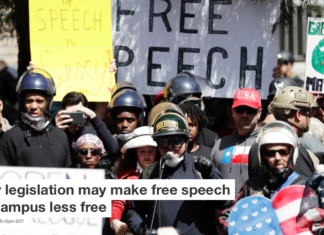 Staff Writer - June 28, 2017
Neal H. Hutchens, University of Mississippi Around the country, state lawmakers have been talking about – and legislating – ways intended to protect free speech...

How millennials are affecting the price of your home

Charlottesville attack shows homegrown terror on the right is on the...