Both celebration – and ire – followed Gov. Gavin Newsom’s announcement of a moratorium on the death penalty in California.

California’s 737 death row inmates constitute more than a quarter of the national number. Keeping them on death row costs US$150 million a year more than sentencing them to life without parole.

California’s death penalty has been at an impasse for decades. The state has not put anyone to death since Clarence Ray Allen’s execution in 2006.

The state’s use of lethal injections was fiercely debated for years. Twice – once in 2012 and again in 2016 – Californians voted on measures to repeal the death penalty, and rejected them. Newsom’s step, which in many ways echoes his historical move as then-San Francisco mayor to marry same-sex couples in 2004, pushes the state in a new direction.

As a criminal justice scholar interested in death and life sentences in California and in criminal justice policy generally, I see Newsom’s order as a sign that the death penalty may soon end nationwide.

While the United States Supreme Court found the death penalty constitutional in 1976, nationwide support for the death penalty is at its lowest point since the 1960s. With this moratorium, California joins a growing list of states who moved away from putting people to death.

Twenty states have abolished the death penalty – eight of them recently. Four more, including California, have placed a moratorium on its use.

Most of these states were already refraining from executing anyone when they abolished the death penalty. In addition to this wave of abolitionism, the death penalty is used less frequently in the 26 states that still have it, partly because drug companies increasingly refused to provide their drugs for use in executions.

A good example of this evolution is the gradual change in approach toward extreme punishment for juveniles.

In 2004, the Supreme Court abolished the death penalty for juveniles. Five years later, it abolished life without parole for offenses other than homicide by juveniles. It then dismantled mandatory life without parole schemes for juveniles – even those who had committed murder. Subsequently it declared these policies retroactive – meaning that even people who were sentenced decades ago, when they were juveniles, can still benefit from these new rules.

The Supreme Court has also wavered over extreme punishment for adults. It ruled the death penalty unconstitutional for most non-homicide crimes in 2007, and Justices Stephen Breyer and Ruth Bader Ginsburg have recently expressed the view that the death penalty’s constitutionality should be reconsidered. When examining “evolving standards of decency,” the Supreme Court looks at state policies. In this respect, Newsom’s announcement may be of huge importance.

California holds a unique position as a criminal justice pioneer. Because of the sheer size of its prison population, any policy change that increases – or decreases – incarceration in California can have dramatic effects nationwide.

In 1976, California moved from sentences set by the legislature to “indeterminate sentences” that allow judges to choose from a sentencing range. The state adopted the Three Strikes law in 1994. These two changes were among the important factors leading to a nearly 900 percent spike in the California prison population between 1976 and 2006.

During the Great Recession, California’s lawmakers began to doubt the state could afford such a large prison population. The Criminal Justice Realignment, a law passed in 2011, resulted in a reduction of approximately 40,000 inmates in California’s prisons. In fact, it is estimated that California’s recession-era reforms have accounted for much of the total nationwide decline in prison population.

California is also unique in its political makeup. The contrast between its vehemently progressive coast and deeply conservative center makes for big differences in policies from county to county – and for surprising support for punitive policies in a state that is widely seen as liberal.

It also means that legislating is often conducted by voter initiatives, which are notoriously vulnerable to manipulation through misleading appeals to anger and fear.

California’s mercurial political climate and the size of its death row mean it might influence other states and, possibly, the Supreme Court in the future.

First, would the more conservative makeup of the Supreme Court affect its willingness to reexamine the constitutionality of the death penalty?

Justice Kennedy, who was especially sensitive to punishment questions and skeptical of the death penalty, has retired. Justice Gorsuch seems to support the death penalty. The jury is still out on Justice Kavanaugh’s position.

Second, how might the moratorium impact the strategy of death penalty abolitionists in the state seeking to reform the two other types of extreme punishment – life with and without parole?

On one hand, the distinction between the death penalty and life without parole, which was already tenuous, becomes even more blurred now that no one on California’s death row will be executed. Because policy is made incrementally, it is arguably time for abolitionist states to take a hard look at their other draconian sentencing practices.

On the other hand, in many cases abolition and moratoria are palatable to people who are on the fence about the death penalty precisely because of the existence of an alternative punitive sentence.

Third, there is plenty of work to be done in California. The powerful image of the death chamber being dismantled is a reminder that behind the death penalty lies a giant machine of lengthy and expensive litigation, dilapidated housing conditions and arcane regulations, which must now be considered. With less need to fund representation in these expensive cases, there might be room for other criminal justice reform.

Fourth, while Newsom’s announcement provoked anger and frustration in some victims, it brought relief to others. In an abolitionist era, reformers should come up with solutions that treat victims with respect and award them solace and closure – albeit not necessarily through harsh punishment.

And finally, careful analysis of homicide rates in the next few years should be conducted in order to learn whether, as many have come to assume, capital punishment does not deter crime.

The dismantlement of the death chamber is not the official end of the death penalty in California. But it could be the harbinger of abolition. 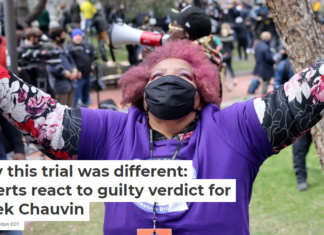