By Deborah Lupton, University of Canberra

3D printing, once an arcane technology used mainly for developing industrial prototypes, is rapidly moving into everyday life. Nowhere is this more apparent than in the phenomenon of the 3D self replica.

3D self replicas are objects that are manufactured using computer files and 3D fabrication technologies to produce a self-likeness, whether of the entire body or part thereof.

Commercial production of body replica figurines for novelty or marketing purposes is growing fast. 3D full-body scanning booths are now offered by some 3D scanner manufacturers to generate the digital data that can produce a self-replica figurine.

These booths are being rolled out in retail stores in the United States, with plans to expand to theme parks, airports and tourist destinations.

One such company, Artec Group, also sells a software package that allows users who own an Xbox Kinect game box to scan their bodies at home and print out a figurine using their own 3D printer or send the digital files to the company for printing.

As part of the launch of Coca-Cola’s new mini-size bottle in Israel, the company invited people to visit its 3D printing lab to have “mini-me” replica figurines made.

3D printing of human figurines has begun to enter fan cultures. People can have their faces superimposed onto Star Wars character figurines.

The family photograph has also been re-imagined in 3D, with services now offered for a family to have themselves scanned and then generated as figurines for display in the home in place of the traditional professional family portrait.

Medical imaging technologies are also being used to create products for the commercial market as novelties.

A New Zealand business, Brainform, offers a service by which MRI scans are turned into full-scale replicas of an individual’s own brain to take home and display.

A Californian company, 3D Babies, is using 3D ultrasound imaging to produce life-sized figurines of human foetuses for their expectant parents to hold and show off, as well as fabricating newborn infant replicas using photographs supplied by the parents.

According to the marketing material of Artec Group, 3D self replicas:

are perfect for capturing life’s milestones in 3D figurine form, like birthdays, graduations, a wedding, pregnancy, or even this year’s awesome Halloween costume.

Future uses of customised 3D self replicas may include generating the figures at regular periods to track an individual’s physical changes over time.

People may choose to collect figurines of lovers or friends as a means of remembering relationships. As these objects become more common in medical practice, they could even be used by patients or their loved ones as mementos of their illness, medical treatment and recovery … or death.

Academic research into the 3D self replica has yet to emerge. As a digital sociologist, for me the developments of these technologies raise a series of intriguing questions.

Given the emergent artist, maker and tinker movement around 3D printing, and as 3D printers become more affordable for the home market, how will people begin to tinker with fabrications of their bodily data?

Will people start to use their medical scans or self-tracked health and fitness data to generate their own artefacts or “data sculptures”?

What will they do with these artefacts? What implications might there be for how we understand and conceptualise human bodies, health and illness?

Some commentators have described 3D self replicas as “3D selfies”. This term is a little misleading, as unlike the standard selfie, these images are not generally self-produced but must be generated by special 3D imaging technologies.

But it suggests the ways in which these likenesses can be used, like 2D selfies, as a form of self-expression and self-promotion and to preserve and share experiences with others, both significant and banal.

What I find particularly interesting about 3D body replicas is that, unlike 2D self-images, they are tangible. We can touch and hold them, arrange them for display in different groupings in our domestic spaces and use them as ornaments. Because they are material objects, they offer different forms of information about ourselves from that conveyed by 2D images.

These objects are so new, we are yet to fully understand or predict their impact. Perhaps they are a passing novelty; perhaps they will have social and cultural consequences we cannot yet foresee.

Deborah Lupton does not work for, consult to, own shares in or receive funding from any company or organisation that would benefit from this article, and has no relevant affiliations. 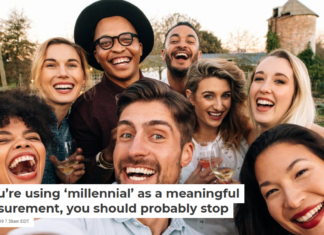 If you’re using ‘millennial’ as a meaningful measurement, you should probably...

Staff Writer - October 22, 2019
Joseph Cabosky, University of North Carolina at Chapel Hill What value does the word “millennial” actually have? Americans have heard the term ad nauseum by now....

Nixon and Reagan tried closing the border to pressure Mexico –...