It’s that time of year again – the end of daylight savings and the beginning of the dark season. While many of us look forward to seasonal festivities, millions can also expect feelings of depression, fatigue, irritability and poor sleep. This form of mental illness, commonly known as the “winter blues”, is Seasonal Affective Disorder (SAD).

SAD occurs most frequently in populations furthest from the equator. It is estimated that 1-2% of North Americans have a mood disorder with a seasonal pattern, with 10% of New Englanders versus 2% of Floridians affected. Symptoms include feelings of hopelessness, low concentration, sluggishness, social withdrawal, unhappiness and irritability.

Decades of research has uncovered the culprit behind SAD: lack of sunlight and disruption of circadian rhythms.

A circadian rhythm is a process the body goes through following a 24-hour cycle. Circadian rhythms are entrainable, that is, they can be reset based on an external influence like light. The human sleep cycle is an example of a circadian rhythm and is shifted based on light levels.

This is why we experience jet lag after travelling across time zones. Similarly, seasonal changes can affect circadian rhythms, due to shorter days and loss of daylight in winter months.

Daylight and your brain

Although most people are able to adapt to the change in seasonal light levels, what makes some vulnerable to seasonal depression? To understand how sunlight affects mental health, we need to first understand how our brains use sunlight to modulate certain behaviour and hormonal processes.

In humans, the hormone melatonin is an marker of external darkness. When darkness descends, melatonin is secreted from a structure called the pineal gland, a pine cone-shaped endocrine gland located in the center of the brain. This gland modulates sleep patterns in both circadian and seasonal rhythms. The secretion of melatonin from the gland corresponds to the length of darkness; as the nights get longer, melatonin secretion follows suit.

The timed production of melatonin is controlled by another area in the brain – the suprachiasmatic nucleus (SCN) of the hypothalamus. The hypothalamus is the primary hormone-producing structure of the brain, controlling body temperature, sleep, circadian rhythm, moods, sex drive, thirst, hunger, and the release of other hormones. The SCN is the “pacemaker” of the brain, consisting of about 20,000 neurons. It maintains an autonomous signal which operates on an approximate 24-hour cycle. Even outside the body, as seen in the laboratory, SCN neurons will continue their circadian cycling. The SCN regulate sleep cycles, alertness, hormone levels, digestive activity, body temperature and immune function.

The eyes have it

Many studies have cited disruption in the circadian control center as a contributing factor to several mood disorders, including major depressive disorder and bipolar disorder. Even though these illnesses are not necessarily seasonal, both entail loss of consistent sleep/wake cycles as seen in SAD.

However, unlike depression and bipolar disorder, the major form of therapy for SAD is the use of artificial light, which alleviates symptoms in 50-60% of people.

Light boxes provide relief to many, and come in a few varieties. Typically light boxes are advertised as broad spectrum light sources, which is pure white light. Some light boxes can also give full spectrum light, which has a broader range of wavelengths, including infrared to near ultraviolet light, and everything in between.

Although full spectrum light boxes provide a source closest to that of natural sunlight, they usually come with a screen to protect against UV rays. In this way, it is often preferable to use a broad spectrum light box to avoid UV ray exposure.

The use of light as a treatment indicates that it is not only the SCN implicated in the onset of this disorder, but there may be a contributing cause related to how we process light in the eye. In fact, various studies have pointed to mutations in a retinal pigment called melanopsin as a source of SAD.

Melanopsin is a molecule which absorbs light in the eye, and through a chemical change, can translate external light levels into messages for the brain. Unlike rod and cone cells, melanopsin is found in specialized cells of the eye which react slowly to changes in light, and are known to regulate the timing of circadian rhythms. Whereas rods and cones are responsible for the detection of motion, color, images and patterns, studies have shown that melanopsin-containing cells contribute to various unconscious responses of the brain to the presence of light, including circadian rhythms.

Overall, melanopsin can translate messages directly from the eye to the SCN. This in turn influences the production of melatonin. The SCN not only projects to the pineal gland, but has wide-ranging connections to other important areas in the brain. So if there is disruption in melanopsin in the eye, which is passed on to the SCN, the potential exists for many areas to be affected.

Though SAD is not fully understood, genetic research into melanopsin, as well as hypothalamic genes associated with serotonin production, holds promise.

In the meantime, the use of antidepressants, therapy, and artificial light may help SAD sufferers through the upcoming dark months. And with holidays approaching, spending time with family, friends and good food is something we can all benefit from.

I have no conflicts of interest to disclose. 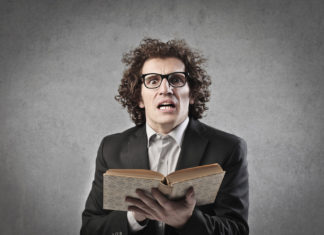 Staff Writer - October 16, 2014
By Chris Hackley, Royal Holloway In the mid-1980s as a further education lecturer I was mocked by some more traditional colleagues for using “lantern slides”,...