By John Mathews and Hao Tan, University of Newcastle

“As I read the agreement it requires the Chinese to do nothing at all for 16 years while these carbon emissions regulations are creating havoc in my state and around the country.” – US Republican Senate leader Mitch McConnell, November 12, 2014.

Far from “doing nothing”, China will be building the world’s largest renewable energy system over the next 16 years. This is something that China has already started doing – so the targets agreed upon are feasible, if arduous.

As part of the US-China climate deal announced on Wednesday, China is committing to raise the proportion of renewables in its total energy system to 20%. As renewables and nuclear power currently account for 10% of China’s total energy consumption, this implies a doubling of its renewables commitment. The challenge is illustrated in the graph below.

Energy use from zero-emission sources in China.
Authors, Author provided

This is why Chinese president Xi Jinping can commit China to peaking its carbon emissions by 2030. In reality, we and many other observers expect China’s carbon emissions to peak well before that date, so there is room for more dramatic announcements to come from the Chinese side.

In fact, at the recent APEC meeting in Beijing, China’s national Energy Bureau stated that China’s coal consumption would probably peak by 2020, at about 4.2 billion tonnes per year. So carbon emissions could peak just a little after that – and certainly before 2030.

Mitch McConnell and many other commentators have placed all their emphasis on China’s building of a “black” energy system, comprising new coal and other fossil fuel facilities, while ignoring the enormous commitments already made to renewables and a complementary green energy system.

By our reckoning, the leading edge of change in China’s energy system is already more green than black, and the total system is greening at such a rate that the goals just announced as part of the climate deal should certainly be met.

The White House, in its statement announcing the joint deal, said that for China to meet its commitment:

…it will require China to deploy an additional 800-1000 gigawatts of nuclear, wind, solar and other zero-emission generation capacity by 2030 – more than all the coal-fired power plants that exist in China today and close to total current electricity generation capacity in the United States.

Renewable electric power capacity in China and other countries in 2013.
Based on REN21(2014) Global Status Report, Author provided

China’s National Development and Reform Commission has already announced plans to raise that total to 550 gigawatts by 2017. This is a commitment to renewables on a colossal scale that dwarfs that of other countries.

This goal would call for an additional 1,000 gigawatts of renewable generation capacity to be built over the next 15 years – or 1.33 gigawatts (equivalent to a large nuclear power station) every week.

The difference between the commitments made by China and those by other countries is that China is committing to renewables as part of an industrial strategy to focus its industrial growth around such clean industries and technologies. As part of the 12th Five year Plan, China has singled out seven strategic industries that it sees as being the pillars of its economy – including electric vehicles, renewable energy, and energy efficiency.

There is likely to be even greener tinge to the 13th Five Year Plan, currently under discussion and due to run from 2016 to 2020.

So far from “doing nothing” over the next 16 years, China is transforming its economy and energy system so that water, wind and solar power will be its driving forces. Other countries – not least close US allies such as Australia and Canada – would be wise to pay attention.

False. China has an extensive plan to curtail its emissions between now and 2030, including building renewable energy facilities on a far larger scale than any other nation. Honouring its new climate pact with the United States will involve doing a lot more than nothing.

The view that China’s announced target is feasible but arduous is correct. It is also true that a peaking of carbon dioxide emissions in China is possible before 2025, given strong Chinese policy efforts and future changes to the rate and nature of China’s economic growth. China has extensive policies in place to constrain the growth in energy use and to shift away from coal, and under this commitment China will intensify those efforts.

It is important to understand that China’s effort is much broader even than the authors of this FactCheck suggest. The text correctly points out the importance of renewable energy expansion, but improvements in energy efficiency and the transformation of China’s economic structure towards high-value manufacturing and services will do more to dampen carbon emissions growth. In my own analysis, my colleagues and I found that a carbon dioxide peak around 2025 would be achieved by maintaining a 4% per year improvement in economy-wide energy productivity, and a 1.0-1.5% annual reduction in the carbon intensity of energy supply. The former comes through better technical efficiency and structural change, the latter through a shift from coal to gas, renewables and nuclear power. – Frank Jotzo 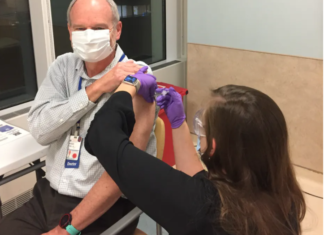 Staff Writer - December 27, 2020
William Petri, University of Virginia This week I was vaccinated against COVID-19 with the Pfizer mRNA vaccine, which brought to mind some frequently asked questions...