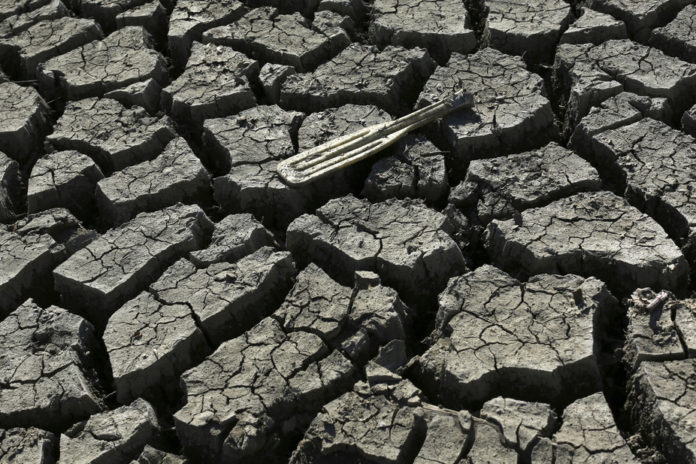 This article is part of The Conversation’s series on drought. You can read the rest of the series here.

California is undergoing a record-setting drought that began in 2012, the worst in at least 1,200 years. It can be seen in many ways: most of the freshwater reservoirs are drying up, crops are wilting in the fields and groundwater is rapidly depleting.

Whatever definition is used for drought, based on meteorological, hydrological, agricultural or socioeconomic references, all the indicators are showing an extreme situation due to particularly warm and dry conditions. Last year had the lowest calendar-year precipitation on record, leading to acute water shortages, groundwater overdraft to replace the missing rain, critically low stream flow and high wildfire risk.

California and other southwestern states have suffered through multi-year droughts in the past, but how does climate change figure into what’s happening now? Can scientists separate the effect of rising greenhouse gas levels on the current drought from other factors? To answer these questions, we need to consider the meteorological forces that drive California’s weather.

Eye on the Pacific

California’s winter precipitation normally comes from east-traveling North Pacific storms, which are guided by the strong river of wind known as the jet stream. Year-to-year variations in precipitation are affected by a number of factors, including the El Niño cycle of warming Pacific Ocean temperatures as well as long-term oscillations in climate that cause natural variability over decades or hundreds of years. Also at play are normal short-term changes in the atmosphere and the effect of long-term climate change.

Droughts are caused when there is a substantial reduction in the number of precipitation-carrying Pacific storms to reach the West Coast. They are blocked by a region of persistently high atmospheric pressure, called an upper-level ridge (see figure, above). This ridge of high pressure directs the jet stream toward a much more northerly track. The result is that most precipitation systems miss California, with some of them going as far north as British Columbia and Alaska.

In 2013 and 2014, the sea surface temperature in the North Pacific was unusually high, which created the conditions for a persistent high-pressure ridge and thus dryness over California. In addition, reduced Arctic sea ice is associated with warmer surface temperature in the Pacific and reduced rain and snowfall in the western part of the US from the northward shift in the storm track.

Persistent high pressure causes a descending motion of air, known as subsidence, which leads to a lack of cloud cover and eventually hotter temperatures on land. And with higher surface temperatures, soils dry as more water evaporates into the air.

Higher temperatures combined with somewhat reduced precipitation – sometimes called “warm droughts” – play a critical role in reducing water availability. In the case of California, precipitation this winter fell in the form of rain instead of snow in the Sierra mountains due to high temperatures. Snowpack is critical because it stores water and releases it slowly. Thinner snowpack means less water stored on the ground for use in the summer. So even a normal precipitation amount but fallen in the form of rain means less water is available.

California has experienced sustained droughts in the past. For instance, during the medieval warming period between 900 and 1330 AD, extensive and persistent mega-droughts occurred in western North America. Paleoclimate studies using proxy records such as tree rings indicate that severe drought periods happened during periods of higher temperatures.

The magnitude of the deficit in precipitation from shifting atmospheric conditions in today’s drought is not so unusual compared with past observations. However, there is also a background of unusually high temperature nowadays, clearly exceeding that of the medieval warming period.

So this is a double whammy for the hydrological balance: less precipitation and more evaporation and transpiration, or water evaporation through plants, due to the warm air.

So the present drought raises at least two questions: first, is this record-breaking 21st-century drought related to anthropogenic climate change, and second, has long-term warming altered the probability that precipitation deficits will yield extreme drought in the future?

Detecting and attributing observed or projected impacts to man-caused climate change is not an easy task. But there is some supporting evidence from improving numerical climate models and the record of several diverse meteorological and hydrological events already happening, including heat waves, flooding or droughts.

Nevertheless, direct causal relationship is nearly impossible to establish in a complex system such as the climate system because interactions and feedbacks all but erase what appear to be causal links.

Still, statistical analysis of past data can help by providing the likelihood of occurrence of particular events. Also, scientists can run climate model experiments that include only natural variability and then include manmade factors, such as greenhouse gases. These tools serve to highlight and distinguish the dominant mechanisms responsible for particular air circulation characteristics.

These climate model simulations show that the extreme and persistent circulation patterns that have caused droughts on the West Coast this century are due to anthropogenic external forces, not natural causes.

For instance, in the case of the persistent region of high pressure – nicknamed the “ridiculously resilient ridge“ – the likelihood of an event as observed in 2012-2013 is one in every 420 years!

Studies suggest that climate change might give rise to a new climate regime, one in which the years of low precipitation will be accompanied by warm conditions, creating the aforementioned “warm drought.”

This prediction suggests a growing risk of unprecedented drought in California, and the western United States in general, driven primarily by warmer temperature, reduced snowpack and late spring and summer soil moisture, even without significantly drier precipitation patterns.

All of this means that sustaining water supplies in parts of the Southwest will be a challenge this year – and in the future.

Catherine Gautier is Professor Emerita of Geography at University of California, Santa Barbara.

New Horizons brought our last ‘first look’ at one of the...