Sometimes war involves battling other countries; other times, it’s the metaphorical kind, like our current “war” against the coronavirus.

We see this war reflected in the language that gets used by politicians, policymakers, journalists and healthcare workers.

As the “invisible enemy” rolled in, entire economies halted as populations “sheltered in place.” We were told to “hunker down” for the long battle ahead and to “support our troops,” the health care workers, fighting on the “front lines.”

These military-inspired metaphors serve a purpose. Unlike the dense linguistic landscape of science and medicine, their messages are clear: Danger. Buckle Down. Cooperate.

In fact, studies have shown that sometimes military metaphors can help unite people against a common enemy. They can convey a sense of urgency so that people drop what they’re doing and start paying attention.

However, as someone who has studied the way language influences behavior, I know that this kind of rhetoric can have long-term effects that are less positive, particularly within health and medicine. In fact, research has shown that these metaphors can cause people to make decisions that go against sound medical advice.

Militarized rhetoric was popularized with the “War on Drugs,” a term coined by President Richard Nixon in an effort to reduce illicit drug use in the U.S. Since then, the language of war has seeped into our collective lexicon. We’re currently engaged in a war against climate change. Some argue there’s a war on Christmas, while others say there’s a war against truth.

So it’s only natural that when a new, deadly virus emerges, the warspeak persists.

Military metaphors aren’t new to medicine; they’ve long played a role in shaping patients’ relationships with illness. Cancer is a key example of this. The cancer is an enemy, invading the patient’s body. Patients are told they must fight, that they are at war, and they must be strong while they receive treatments that target those enemy cells for destruction.

The fact they are used so often indicates that these metaphors serve a purpose. They’re simple and straightforward, helping us comprehend and categorize something that’s complex and unpredictable.

Why war and medicine don’t mesh

But this framing contains a potentially dangerous undercurrent.

Language affects cognition, and cognition affects our behaviors. Wartime language has been shown to alter our behavior – and not always for the better.

In war, opposing sides are engaged in a struggle. Whoever survives longest and fights hardest wins. Strength and confidence are commended, while fearful behaviors are viewed with contempt. The World War II poster “Keep calm and carry on” exemplifies this mindset. The underlying message of the so-called “War on Terror” was to not allow fear to disrupt our lives. There was a major focus on returning to “life as normal,” and the return to national pastimes, like baseball, was thought to play a huge role in helping the country heal.

These approaches can appear helpful, but in the case of the coronavirus medical advice suggests physical distancing and mask wearing. Unfortunately, this guidance requires disruption. To stay home is to change your routine, to wear a mask is to appear weak and afraid and to avoid everything that makes up our daily routine is to let the enemy win.

Research shows that military metaphors lead to negative behaviors in other health situations. People may become more likely to take risks, overtreat themselves and be less likely to engage in preventive activities. For example, some people may not want to appear afraid of sun exposure, and this can make them less likely to use sunscreen. Others may continue seeking treatments for terminal diseases – despite the debilitating side effects – because they don’t want to be seen as having “given up.”

The way war metaphors emphasize strength can also stigmatize those who do become sick: They’re now seen as weak.

The dichotomy of strength versus weakness implies choice, as though those who were infected chose to surrender. In reality, that which makes us appear strong and confident in a war only works in the context of a battle with other humans. It goes without saying that something like a virus or an illicit drug has no grasp of human psychology, so displays of confidence are meaningless.

War loosens our morals and ethics

During war, the public is generally more open to actions that aren’t tolerated in peacetime. The construction of Japanese internment camps during World War II and the depiction of immigrants as “invaders” to lay the groundwork for their indefinite detainment are stark illustrations of this phenomenon.

In the world of research and medicine, war and war metaphors have been shown to contribute to unethical research. The “battles” against certain diseases have led researchers to violate their ethical responsibility in an effort to “win the war” for the greater good. For example, in the infamous Tuskegee Syphilis experiments researchers justified not treating almost 400 African-American men for syphilis – or even telling them they had the disease – in order to learn about natural disease progression.

During the pandemic we’ve seen discussions of health care rationing and the prioritization of some lives over others in a way that wouldn’t normally be acceptable. Texas Gov. Dan Patrick openly advocated that older people should volunteer to die to save the economy.

When we describe a virus as an enemy to be defeated, it shifts our perceptions about how to respond to the virus and can cause the public to behave in illogical ways.

As states across the U.S. start to reopen, only to find out the virus continues to spread unabated, these military metaphors could be causing more harm than good. It may be time to change the way we talk about the virus. 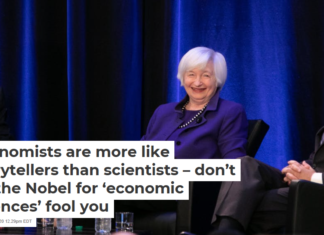 Economists are more like storytellers than scientists – don’t let the...

Staff Writer - October 10, 2020
Carolin Benack, Duke University When you listen to an economist, chances are you’ll hear a lot of statistics. Federal Reserve Chairman Jerome Powell’s speech at the...