In August 1965, Morley Safer, a reporter for “CBS News,” accompanied a unit of U.S. marines on a search-and-destroy mission to the Vietnamese village of Cam Ne. Using cigarette lighters and a flamethrower, the troops proceeded to burn down 150 houses, wound three women, kill one child and take four men prisoner. Safer and his crew caught it all on film. The military command later claimed that the unit had received enemy fire. But according to Safer, no pitched battle had taken place. The only death had been the boy, and not a single weapon had been uncovered.

In describing the reaction, Safer would later say that the public, the media and the military all began to realize that the rules of war reporting had changed.

The New Yorker’s Michael Arlen dubbed Vietnam the “living room war.” The images of the war – viewed on evening news shows on the country’s three networks – enabled the public to understand the war’s human costs. In this sense, media coverage contributed to the flow of information that’s vital to any functioning democracy, and pushed Americans to either support or oppose U.S. involvement in the conflict.

However, in the country’s myriad military conflicts since Vietnam, this flow of information has been largely transformed, and it is now more difficult to see the human consequences of military operations. Despite a digital revolution that’s created even more opportunities to transmit images, voices and stories, the public finds itself further removed from what’s really happening on the front lines.

Issues of truth, representation, interpretation and distortion lie at the core of the media’s presentation of war. So do power and control.

Governments aren’t always afraid to show the public what war looks like. During World War II, journalists were subject to censorship. Yet in September 1943, President Roosevelt and the War Department allowed Life magazine to publish George Strock’s moving photograph of three dead American soldiers sprawled on Buna Beach in the Pacific.

That decision pointed to the administration’s confidence that the public would continue to support the military, even after being brought – as the accompanying Life editorial noted – “into the presence of their own dead.”

But Vietnam destroyed the assumption that the public would always support their government’s military policies, and the images accompanying the conflict were partly responsible.

In Safer’s case, after a heated debate among CBS officials, the footage of American troops setting fire to a Vietnamese village was shown on “The CBS Evening News” with Walter Cronkite.

The government seemed to recognize the power of this footage: It reacted swiftly – and from the top.

The next morning, President Lyndon B. Johnson called CBS president Frank Stanton to berate the network for airing the footage.

“You know what you did to me last night?” Johnson asked.

“You shat on the American flag.”

The Pentagon was also furious because the story challenged their own narrative – that enemy troops had died, and that American troops were able to distinguish the Viet Cong from the local population.

Safer’s images would resonate in American culture. Torching a village or field came to be called a “Zippo mission,” while scenes of setting villages on fire appeared in many Vietnam War films.

They didn’t automatically create public backlash. But viewers couldn’t ignore the chaos that seemed to be emerging from the battlefield. And this had the net effect of debunking the government’s claim that the military was making significant progress in Vietnam. A growing number of critics outside – and, significantly, inside – the administration argued the war could not be won.

On balance it would seem that more skepticism when it comes to judging the need to go to war is a good thing.

Not everyone, however, would agree. In the years after Vietnam, some members of the political and military establishment wanted to be able to use military force without feeling hamstrung by the possibility of public opposition.

To them, public exposure to bloodshed and the resulting aversion to going to war had become a major problem. They even had a name for it – the “Vietnam syndrome” – and it required a new media strategy.

One solution involved imposing strict control over the movements of journalists. The government could no longer afford to allow – as it had in Vietnam – enterprising reporters to run around the battlefield, going wherever they wanted and speaking with whomever they pleased.

During Grenada, Panama and the Gulf War, they organized journalists into small “pools” that had tightly controlled access to the battlefield (if at all).

Even with these restrictions in place, the Pentagon bristled at CNN’s dramatic broadcasts of the bombing of Baghdad during Operation Desert Storm. It’s not as if the cable network was even criticizing the attacks; it was the very images of U.S. aircraft bombing a major city that defense officials found so unsettling. The soundtrack alone – the thump of high-yield explosions, the sirens of emergency vehicles, the staccato of anti-aircraft fire – ran counter to the administration’s preference for their own soundless footage of smart bombs being smoothly guided to their military targets.

Some journalists started to complain about the pool system and tried to strike out on their own. By the 1990s, the most astute media managers within the Pentagon realized that censorship and other efforts to directly control the media were likely to incite criticism and public backlash.

So other strategies emerged. Instead of denying access to the battlefield, they hoped to shift what journalists would report from the battlefield. The war would become localized through human interest stories, told by “embedded reporters” attached to units. Behind this was a communication strategy to make reporters more inclined to describe the daily lives of soldiers, rather than the broader military and political objectives. Quiet heroism would replace loss; hometown celebrations would replace critical reviews of policy and strategy.

At first glance, the Pentagon’s preference for “embedded reporting” evokes the Vietnam-era practice of allowing journalists to work among combat soldiers. But in Afghanistan and Iraq there was a key difference. Vietnam provided an approximate window to the consequences of combat. In Iraq, journalists were close to the fighting but provided a very different type of drama.

Viewers back home were treated to green-hued images from night scopes and the shaky footage from hand-held cameras. The jumpy videos created tension, but didn’t bring the audience any closer to the pain of war. Viewers understood war through powerful but distracting footage, rather than through the visceral images of destruction, chaos and tragedy that the media was able to capture during the Vietnam era.

Furthermore, government officials discovered that they could enjoy more sympathetic reporting from those who became an accepted member of a “band of brothers.” At the same time embedded reporters offered a kind of credibility that government spokespeople didn’t possess. Pictures and stories of troops providing food, medical aid, and other forms of assistance to Iraqi civilians – and even to wounded Iraqi soldiers – emerged easily.

But the pain of the battlefield – the physical and psychological repercussions – remained remote. It wasn’t even possible to see pictures of returning body containers until the Obama administration reversed the policy in 2009.

There are exceptions. Some excellent journalists did manage to communicate the costs to America’s military and to the local population. In some cases, revelations emerged from the proliferation of new media outlets.

Today, “the living room war” is now a distant memory. The public no longer receives all of its information from the same three channels. Instead, there are thousands of media outlets all covering the same conflicts, from different perspectives – with some war coverage veering into entertainment and even celebration.

“Let the atrocious images haunt us,” Susan Sontag once wrote.

It’s an invocation to not turn away from the dramatic images of battle, no matter how painful or disturbing. Going to war is arguably one of the most important decisions a country can make; for this reason, access to the true sacrifices, costs and horrors should not be restricted. 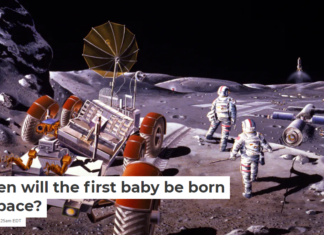 When will the first baby be born in space?

Staff Writer - May 23, 2021
Chris Impey, University of Arizona When the first baby is born off-Earth, it will be a milestone as momentous...