As Republicans in Congress put the finishing touches on a tax plan that’s aimed at overhauling the system, there is one other reform they should consider: making the U.S. tax code fairer to women entrepreneurs.

Currently, federal tax incentives targeted to help small businesses grow and access capital either effectively exclude or bypass altogether the majority of women-owned firms, according to groundbreaking research I conducted on how the tax code affects women business owners through American University’s Kogod Tax Policy Center. For the first time, my research considered specifically whether women business owners can (or do) take advantage of tax breaks intended for small businesses.

Our findings uncovered a significant blind spot when it comes to women business owners and the U.S. tax code. In fact, our survey data – together with our review of existing tax research on the topic – suggest that many women-owned companies are unable to fully access more than US$255 billion worth of tax incentives Congress has designed to help small businesses.

My question for lawmakers is this: Will Congress seize the once-in-a-generation opportunity to pass comprehensive tax reform that recognizes the challenges women business owners face and how we can help them through the tax code?

Since Congress last overhauled the tax code in 1986, the number of women business owners has spiked from 4.1 million to more than 11 million at the end of 2016, making up more than a third of all U.S. businesses. They employ 9 million people, contribute $1.6 trillion to the economy and nearly every single one is a small business.

More recently, their ranks have swelled at a rate five times faster than the national average for all businesses, surging 45 percent from 2007 to 2016 – a period that included the Great Recession.

Even more impressive than their rate of growth is the fact that women have achieved all of this without the full benefit of tax breaks targeted to small businesses.

Over the years, Congress has done a number of things to promote women’s business ownership by passing legislation targeting discriminatory lending practices and promoting federal contracting and counseling opportunities for women business owners.

For example, the Equal Credit Opportunity Act of 1974 outlawed discrimination in granting credit based on sex or marital status, and the Women’s Business Ownership Act of 1988 supported women small business ownership and established the National Women’s Business Council.

But lawmakers have been myopic in terms of the severe disadvantages women face accessing capital to grow their businesses, even as they’ve repeatedly targeted this common problem among small business owners in the tax code.

Earlier this year, the Small Business Administration’s Office of Advocacy issued a report that found that women-owned companies consistently lag behind in terms of revenue and employment. Other congressional research has found that just $1 of every $23 in conventional small business loans goes to a woman-owned business.

The results were illuminating.

The first three provisions are so limited in design that the majority of women-owned businesses simply can’t use them, making accessing capital through tax breaks impossible for these business owners. The rules either explicitly exclude service companies or effectively bypass any business that isn’t a “C corporation” or that has few investments in capital intensive equipment and can’t claim the deduction.

This is problematic because 61 percent of women-owned businesses are concentrated in service industries, while the majority of all small businesses are organized as something other than a C-Corp. This makes it a lot harder to attract investors.

Our survey data confirmed these findings: very few respondents said they had ever taken advantage of sections 1202 (less than 1 percent) or 1244 (less than 6 percent), while we found that more than half aren’t fully benefiting from section 179.

As a result, women business owners are potentially missing out on the more than $255 billion in aid the U.S. will spend over the next few years on these provisions. At the same time, our survey data confirmed that when women business owners could take advantage of a tax break, they did. Almost 60 percent of our respondents claimed the startup deduction, for example.

Equally troubling is that we found a complete lack of government research on how the tax code affects women business owners. To date, the House and Senate tax-writing committees have never held a full hearing on the challenges of women business owners and whether the tax code’s small business tax incentives are operating as intended with respect to these companies. And there are scant data from relevant government agencies on these critical questions. The Internal Revenue Service, the Treasury Department and the SBA don’t even track tax data on women-owned companies, which make up almost 40 percent of all U.S. businesses.

Notwithstanding this current state of affairs, there have been some positive signs in recent weeks that lawmakers will not ignore the questions raised by our report. Members in both the Senate and House have reviewed our research and are considering the importance of its findings.

Democratic Senator Jeanne Shaheen cited our report during a committee hearing in June, and I testified before the House’s Committee on Small Business earlier this month.

However, the absence of government data and congressional oversight on these small business tax expenditures deprives lawmakers of vital information and raises unanswered questions about whether these tax provisions are operating as Congress intended. Academic and government research have consistently identified access to capital as a barrier women business owners encounter.

Congress simply doesn’t have the information needed to make decisions to help these 11 million small businesses overcome existing barriers to growth. This flies in the face of the commitment Congress made in 2016 to pursue evidence-based policymaking. Policymakers have opportunity to act on behalf of the nation’s women business owners as they prepare to overhaul the U.S. tax code. 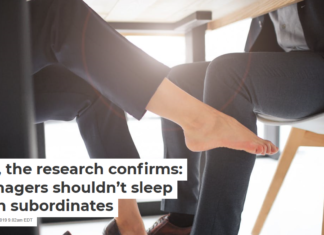 Staff Writer - November 2, 2019
Vanessa K. Bohns, Cornell University U.S. Rep. Katie Hill recently stepped down after information about an affair with a campaign staffer, and allegations of one...