By Morgen Witzel, University of Exeter

What do the prime ministers of Singapore, Malaysia and Finland have in common with Syrian President Bashar al-Assad, Colombian President Juan Manuel Santos Calderón and King Abdullah II of Jordan? They are among 26 of the current world heads of state who were educated, at least in part, at a UK higher education institution, according to new analysis by the British Council.

There was a time when virtually every post-colonial leader studied at Oxford or Cambridge, even if only to find a way of beating the colonial masters. Gandhi later described his experience of studying law at the Inner Temple as invaluable in the later struggle for Indian independence.

Out of 245 current heads of state, 11% studied in the UK and 12% studied in the US – meaning over one in five have studied in either the UK or US. Those with UK qualifications include monarchs such as King Harald V of Norway, Prince Albert II of Monaco and Zimbabwe’s President Robert Mugabe, who did a correspondence degree with the University of London.

US and UK on top

Digging down further, of the 85 of these leaders who chose to study outside their own country, nearly a third – 31% – made the UK their destination. Only the USA, ranks higher as a destination at 34%.

Interestingly too, one in 50,000 graduates from UK universities goes on to become a world leader, whereas in the USA the proportion is one in 500,000. But we should remember that there are far more universities, and far more graduates, in the USA than in the UK.

What continues to make the UK a destination of choice for world leaders who want to study overseas? One important factor is that the UK is home to some of the world’s most trusted educational brands. Although the British Council figures don’t show a breakdown by university, it is a safe bet that a large proportion of the leaders who attended university went to Oxford or Cambridge, with the London School of Economics, Imperial College London, UCL, St Andrews and a few others mopping up most of the remainder.

There is also the opportunity to learn English, still the lingua franca of international diplomacy and business. And as well as the quality of education, it seems that networking opportunities are very important. Becoming part of an old boy (or old girl) network is a good way to boost one’s own career chances and enhance prospects of becoming a leader, and that is just as true overseas as in the UK.

Don’t take it for granted

But this attractiveness to foreign students cannot be taken for granted. In the 1970s and 1980s Canada was also an attractive place to study for foreign university students, particularly those from Commonwealth countries who paid the same tuition fees as domestic students. But as US higher education leader Alice Chandler described in her contemporary report, Obligation or Opportunity, a steep rise in fees charged to foreign students caused a sharp fall in overseas enrolments and Canada ceased to be regarded as a friendly destination to foreign students.

The raising of student fees in Britain, plus the continued inclusion of students within the net migration target could prove a similar discouragement. Despite the strength of their brands, if UK universities are seen as no longer offering value for money, students will look elsewhere.

An even more serious threat – and one entirely beyond the control of our own educational establishment – is the potential rise of high-quality schools and universities in other countries, especially China and India.

The rise of the Indian School of Business in Hyderabad, which had a world top-ten ranking just ten years after its foundation, is an example of the speed with which competitors can and will emerge. The threat of well-founded and well-equipped universities with enough money to lure world-class expatriate professors back from their posts in the UK to their homeland – and even poach Western professors from their own universities – is very real. The money is there in China and India, the opportunity is there; all that is lacking at the moment is the strategic intent.

A new style of leadership

What will it mean if, in 20 years time, the centre of gravity shifts and Delhi and Shanghai take over from Oxford and Cambridge as the educational destinations of choice? First, of course, the would-be leaders of the UK and US will face a choice: do they stay at home and take their education in an increasingly parochial system, or do they go overseas where they can mix with other future leaders like themselves? Some will find that choice hard to make.

Second, we may find a different style of leadership emerging, one that is less overtly “Western” and less command-and-control oriented. It may take more account of other styles of leadership and is more multi-national – and polyglot, for the importance of English as in international language is bound to decrease.

For the last several generations, the UK and the US have exported “Westernised” leaders to Asia and Africa, not always with happy results. It will be interesting – and perhaps in the Chinese sense of the word – to see what ‘Easternised’ leaders are able to do when they return home to the UK.

Morgen Witzel does not work for, consult to, own shares in or receive funding from any company or organisation that would benefit from this article, and has no relevant affiliations. 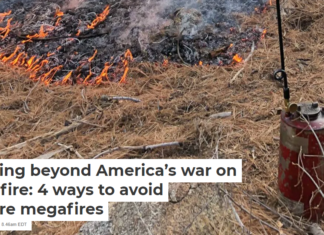 Moving beyond America’s war on wildfire: 4 ways to avoid future...

Why are drug names so long and complicated? A pharmacist explains...