The world is an uncertain and risky place. The news constantly bombards us with scary situations from school shootings to gruesome murders.

Risk is everywhere and associated with everything. For example, the Centers for Disease Control and Prevention a decade ago estimated over 20 million people a year ended up in emergency rooms because of bathroom injuries.

While this figure is shockingly high, it probably won’t prevent you from using the toilet or washing your hands. And in general, hiding under the bed to avoid risky decisions is not a realistic option for living life.

In part, that’s because we’re all risk analysts, continually weighing the costs and benefits of every decision we make. The problem is, most of us aren’t actually that good at it. As an economist, I thought it would be interesting to explore how we weigh risk in our daily lives – and how we might be able to do it more accurately.

We spend a great deal of time making decisions with at least a little risk involved. Some of them are relatively ho-hum, such as what to wear to work with a minor risk of a colleague wearing the same outfit, while others are potentially fatal, such as whether to sprint across the street when the sign says “don’t walk.”

Scholars call the odds of something happening multiplied by the cost or payoff the “expected value” of a situation. This explains, for example, why so many people run red lights.

Speeding through a red is a US$500 ticket in California and Maryland, which is about the most of any state in the country. Let’s assume the police stop and ticket one out of every thousand cars that run a red. This means the odds of being stopped are 0.1 percent.

The expected value of running a red is the 0.1 percent probability times the $500 cost, or 50 cents. Even though most people haven’t done the math, one reason so many drivers speed up when the traffic light turns yellow is because intuitively they know the expected cost of breaking the law is very low – and in their mind the value of getting to their office or appointment is much higher.

The problem is people aren’t very good at estimating the two variables required to get an expected value.

Part of expected value is understanding the probability or odds of a situation.

Probability is the chance something will happen and is simply a number from zero percent – an impossibility – to 100 percent – a sure thing. No matter how many times a coach screams at a player to give 110 percent, this figure is outside the realm of possibility.

For example, many people are terrified about flying on planes because of the possibility the one they’re on might crash. However, the actual chance of someone dying in a commercial airline crash is very close to zero.

On the other hand, the flu is very common. Every year millions of people get the flu and thousands even die from it.

Nevertheless, many people do not get a flu shot – almost 60 percent of adults and 40 percent of children in recent years – because they don’t think they will get the flu.

The cost or payoff

The cost or the payoff is the other part of expected value. One problem is the cost or payoff isn’t always as obvious as in the case of a speeding ticket, and sometimes assigning a dollar value can be complicated.

Kahneman and Tversky also found that people feel more pain from a loss than pleasure from a similar-sized dollar gain. Being forced to pay a $500 fine for running a red light makes people suffer more mental anguish than the happiness they would get from winning $500 for being randomly rewarded for stopping when a traffic light turned red.

The particular pain from having money taken away is called loss aversion. Because people loathe or hate losses they often buy insurance. Having insurance means giving up a small certain payment today to ensure a large uncertain payment won’t be required in the future.

It also helps explain why many people are terrified of flying. Most people would give all of their money to avoid the pain of dying in a plane crash. Even if the actual chances are quite small, some people believe a fiery airplane death is one of the most painful ways to die.

Risk is an inherent part of our lives. There is almost nothing we can do to make the world a more certain place. We all have to cross streets, and many of us have to fly in planes or drive cars.

However, when faced with a risky choice, you need to think not only about the odds but also the cost or payoff. It is less important whether you use the simpler expected value model or take into account our human quirks and use prospect theory.

What really matters for making better choices is to understand that risk is more than just the chance something will occur. 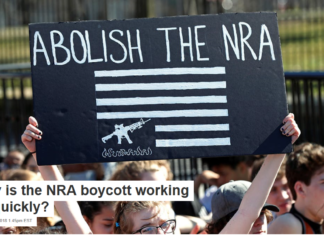 Staff Writer - February 27, 2018
Jerry Davis, University of Michigan The boycott of the National Rifle Association following its response to the school shooting in Parkland, Florida, came fast and...