Extremely powerful winds swept across a large part of the U.S. on Dec. 15, 2021, hitting several states with hurricane-force gusts. Record temperatures helped generate tornadoes in Iowa, winds spread grass fires and dust clouds in Kansas, and wind damage was reported from Colorado through the Midwest. The National Weather Service described it as a “historical weather day” with a “never-before-seen storm outlook.” A meteorologist with the service later said it qualified as a “serial derecho” – the powerful storm had winds over 80 mph but more spread out than the intense derecho that hit Iowa in 2020. At least five people died in the storm, the Associated Press reported.

We asked atmospheric scientist William Gallus, whose office at Iowa State University was at the heart of the storms, to explain what caused the extreme weather and why it was so unusual.

What happened in the atmosphere to trigger such extreme weather over such a wide area?

We were seeing very strong winds because of a very powerful disturbance in the jet stream. That disturbance helped to create a very intense low-pressure system, which creates strong winds and storms. But the low pressure wasn’t what made this event unusual.

It was unprecedented because an incredible amount of warm air got pulled up from the south ahead of the storm.

Here in Iowa, temperatures were the hottest they’ve ever been in December, with temperatures in the mid 70s on Dec. 15, and a very unusual amount of humidity came up with those temperatures. That’s why we were seeing tornado warnings across the region – and reports of tornado damage.

Tornadoes are extremely rare in Iowa in December. Minnesota, which had never had a tornado in December, also had tornado warnings and a possible sighting.

The wind speeds with this particular system were about as strong as we’ve seen. But it was all of the other weather parameters coming together in December that put this storm system off the scale.

With the warm moist air, we also had thunderstorms, and thunderstorms tend to make the winds even stronger. If you went up 1,000 feet in the sky, you would find it’s much windier up there. When you have thunderstorms, the rain helps create a current of wind that goes downward, which we call a downdraft. If you have this downdraft, it tends to carry the really strong winds down to the ground. Thunderstorms in the conditions we were seeing could bring winds that could easily get over 80 mph.

Colorado saw wind gusts over 100 mph. What happened there?

In Colorado, the mountains also help accelerate the wind.

The winds have to rise over the Rocky Mountains. If you get a temperature inversion, where the temperature actually starts to go up rather than down as you get higher in the atmosphere just above the top of the mountains, it can act like a lid that traps the momentum of the wind going over the mountains. The wind can’t really spread out, so instead it rushes downward once you’re on the east side of the mountains.

With anything going downward, gravity accelerates it, just like if you drop a ball from the top of a skyscraper. The same thing happens to these winds. As they flow down the east face of the Rockies, they accelerate.

When you’re on the leeward side of a mountain range, like Denver and Boulder, winds in those areas can get really strong as they’re descending.

What role does the jet stream play in a storm like this?

When we get a low-pressure system, it’s because of wiggles that are happening in the jet steam. We call them troughs in meteorology.

If you look at a map showing the jet stream, the jet stream looks like a roller coaster – it oscillates up and down, from north to south. Any time you’re out ahead of one of these troughs, where the jet stream bends down toward the south and then back toward the north, the air must rise out ahead of it, and this results in a low-pressure system. The winds that blow around it can become very strong.

In this case, there was an especially sharp trough in the jet stream, almost in a “V” shape, that intensified the effect. https://www.youtube.com/embed/o203JXAnSA0?wmode=transparent&start=0 What is the jet stream?

Is there a connection between this storm and the deadly tornadoes that hit Kentucky and other states on Dec. 10-11?

It’s hard to say if there was one trigger somewhere on the planet that managed to create these two different ripples in the jet stream.

What’s interesting is that there is La Niña going on in the Pacific Ocean. When we have La Niña conditions, we often find that the far northern part of the United States ends up colder than normal and the south ends up warmer, so you have this bigger contrast in temperatures than normal and it often leads to a stronger jet stream.

This article was updated with a National Weather Service meteorologist describing the storm as a “serial derecho.” 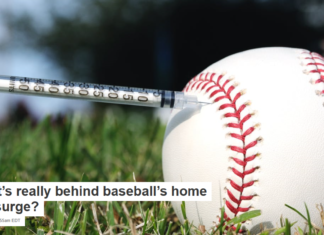