Millions of Americans enjoy observing and photographing wildlife near their homes or on trips. But when people get too close to wild animals, they risk serious injury or even death. It happens regularly, despite the threat of jail time and thousands of dollars in fines.

These four articles from The Conversation’s archive offer insights into how wild animals view humans and how our presence affects nearby animals and birds – plus a scientist’s perspective on what’s wrong with wildlife selfies.

1. They’re just not that into you

In some parts of North America, wild animals that once were hunted to near-extinction have rebounded in recent decades. Wild turkeys, white-tailed deer, beavers and black bears are examples of wild species that have returned to large swaths of their pre-settlement ranges. As human development expands, people and animals are finding themselves in close quarters.

How do the animals react? Conservation researcher Kathy Zeller and her colleagues radio-collared black bears in central and western Massachusetts and found that the bears avoided populated areas, except when their natural food sources were less abundant in spring and fall. During those lean seasons, the bears would visit food sources in developed areas, such as bird feeders and garbage cans – but they foraged at night, contrary to their usual habits, to avoid contact with humans.

“Wild animals are increasing their nocturnal activity in response to development and other human activities, such as hiking, biking and farming,” Zeller reports. “And people who are scared of bears may be comforted to know that most of the time, black bears are just as scared of them.”

When a recovering species shows up on its old turf or in its former waters, humans aren’t always happy to make room for it. Ecologist Veronica Frans studied sea lions in New Zealand, a formerly endangered species that moves inland from the coast to breed, often showing up on local roads or in backyards.

Frans and her colleagues created a database that they used to find and map potential breeding grounds for sea lions all over the New Zealand mainland. They also identified potential challenges for the animals, such as roads and fences that could block their inland movement.

“When wild species enter new areas, they inevitably will have to adapt, and often will have new kinds of interactions with humans,” Frans writes. “I believe that when communities understand the changes and are involved in planning for them, they can prepare for the unexpected, with coexistence in mind.”

3. Your presence has a big impact

How close to wildlife is too close? Guidelines vary, but as a starting point, the U.S. National Park Service recommends staying at least 25 yards (23 meters) away from wild animals, and 100 yards (91 meters) from predators such as bears or wolves.

In a review of hundreds of studies, conservation scholars Jeremy Dertien, Courtney Larson and Sarah Reed found that human presence may affect many wild species’ behavior at much longer distances.

“Animals may flee from nearby people, decrease the time they feed and abandon nests or dens,” they report. “Other effects are harder to see, but can have serious consequences for animals’ health and survival. Wild animals that detect humans can experience physiological changes, such as increased heart rates and elevated levels of stress hormones.”

The scholars’ review found that the distance at which human presence starts to affect wildlife varies by species, although large animals generally need more distance. Small mammals and birds may change their behavior when people come within 300 feet (91 meters), while large mammals like elk and moose can be affected by humans up to 3,300 feet (1,006 meters) away – more than half a mile.

4. Don’t take wildlife selfies, even if you’re a scientist

There are stories from around the world of people dying in the act of taking selfies. Some involve wildlife, such as a traveler in India who was mauled by an injured bear in 2018 when he stopped to photograph himself with the animal.

Tourists are often the culprits, but they’re not alone. As ocean scientist Christine Ward-Paige explains, scientists who have special permission to handle wild animals as part of their field research sometimes use this opportunity to take personal photos with their subjects.

“I have witnessed the making of many researcher-animal selfies, including photos with restrained animals during scientific study,” Ward-Paige recounts. “In most cases, the animal was only held for an extra fraction of a second while vigilant researchers simply glanced up and smiled for the camera already pointing in their direction.”

“But some incidents have been more intrusive. In one instance, researchers had tied a large shark to a boat with ropes across its tail and gills so that they could measure, biopsy and tag it. Then they kept it restrained for an extra 10 minutes while the scientists took turns hugging it for photos.”

In Ward-Paige’s view, legitimizing wildlife selfies in this way encourages people who don’t have scientific training or understand animal behavior to think that taking them is OK. That undercuts warnings from agencies like the National Park Service and puts both people and animals in danger.

Instead, she urges fellow scientists to “work to show the vulnerability of our animal subjects more clearly” and help guide the public to observe wildlife safely and responsibly. 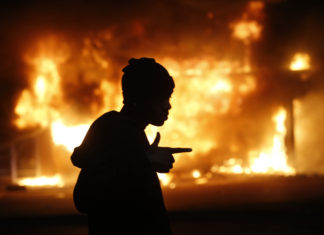 Staff Writer - December 27, 2014
By June Cross, Columbia University Before the ambulance even came to collect the body of 18 year-old Michael Brown from the streets of Ferguson, it...