Editor’s note: The seven Democrats who qualified for the final Democratic presidential debate of 2019 sparred over the economy, trade, social justice and many other issues – including “wine caves.” We asked three scholars to watch the Dec. 19 debate, held at Loyola Marymount University in Los Angeles, and pick a quote from one of the candidates to highlight and analyze.

“It’s clear why Americans can’t agree on impeachment. We’re getting news from different sources and … Americans don’t trust the media networks to tell them the truth.” – Andrew Yang

Yang makes a very good point. If you look at President Donald Trump’s approval ratings and the national opinion on impeachment, they have been extremely steady.

That’s because American citizens see very different versions of the country depending on where they get their news. If they are reading and watching, say, the New York Times and the Washington Post, there are clear reasons to support impeachment. For example, Trump asked a foreign leader to look into a political rival.

If they are consuming news on the other end of the ideological spectrum from sources like Fox News, Trump either did not do anything wrong — as Mick Mulvaney quipped, “Get over it” – or he did something wrong but it falls below the level of impeachment.

The discussion about what, if anything, he did wrong has stalled out. Furthermore, as Yang points out, we know the score of the ballgame.

The senate needs 67 “yes” votes to convict the president of impeachable offenses. That means at least 20 Republicans would have to break ranks with Senate Majority Leader, Mitch McConnell, to impeach a president of their own party.

How they vote may very well depend on where their constituents get their news.

I believe Sanders is right in his characterization of Trump’s new trade deal with Mexico and Canada – and, in fact, he may be foreshadowing trouble over its passage in the Senate.

The United States Mexico Canada Agreement, or USMCA, as the trade deal is known, has been described by Speaker Nancy Pelosi as a “jobs bill.”

By requiring most workers who build vehicle parts to earn at least $16 an hour and enforcing tougher labor standards for Mexican workers, the USMCA is expected to discourage outsourcing from U.S. and therefore create jobs in the country.

But this argument glosses over a key dynamic in U.S. manufacturing: the acute shortages of skilled workers in the sector. The problem is not the lack of jobs, but the fact that manufacturers can’t find skilled workers to employ. That’s why U.S. companies have resorted to automation and outsourcing to other countries – and why the USMCA is unlikely to lead to more jobs in the U.S.

Demanding Mexican companies pay higher wages will likely increase production costs for U.S. manufacturers in a variety of industries, from automotive and aerospace to electronics and chemicals. And these higher costs would then be passed on to American consumers, which would reduce real purchasing power and lower living standards.

Although the USMCA sailed through the House, it may have more trouble in the Senate, where it will need 60 votes – including at least 7 Democrats or independents. Although many expect the deal to clear that hurdle in 2020, the opposition of Sanders as a top candidate for president may be a warning sign that things won’t be so smooth.

Besides challenges getting Democrats on board, there’s the unpredictability of moderate Republicans like Susan Collins and Mitt Romney as well as others who don’t like the concessions to Democrats. It’s possible the more we learn about the impact of the trade deal, the more opposition from senators in affected states will grow. The tone and outcome of Trump’s impeachment trial may have an impact as well.

“I think he’s a pretty good size for a president; he was five-foot-four.” – Minnesota Sen. Amy Klobuchar

Imagery is a powerful tool to get attention and persuade people to embrace an idea. The more easily a listener can construct an image in her mind, the easier it is to process a message, and the more compelling that message becomes.

Klobuchar did just that while responding to the opening question of how to get more people to support Trump’s impeachment. In the quote above, she was referring to James Madison, who she used to make a point about the importance of impeachment in the Constitution.

As soon as she mentioned that Madison was 5 foot 4 inches tall – about four inches shorter than the senator – we formed a powerful image in our minds of the Founding Father, and Klobuchar had our attention for the rest of her argument.

Imagery is typically used in dramatic ways in politics. For instance, political rallies often use human exemplars to make an abstract issue feel more real – they bring in a parent of a gun crime victim or a Vietnam vet who does not get enough medical support or a single mother who is doing four jobs but still not earning enough to make ends meet.

But what does one do at a political debate in which one cannot bring in the people? One way is to use language that evokes a vivid mental image. Citing stats about gun violence or economic inequality can impress; it takes the imagery to connect with people and persuade them to see your point of view.

An important difference is that Klobuchar wasn’t trying to get you to empathize with Madison – a trick politicians often use at rallies to show their compassion for someone who has suffered. She was simply using basic, evocative language to make a point come to life. 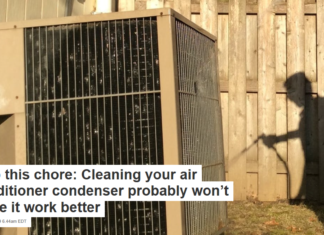 Staff Writer - March 24, 2019
David Yuill, University of Nebraska-Lincoln I asked my neighbor who hoses off his air conditioner condenser every spring why he does it. “Because my dad...