In a New York City neighborhood, the challenges – and potential – for America’s urban future

When you exit the elevated number 7 subway at the 74th Street station in the Jackson Heights section of New York City, a walk northward immediately puts you in a Little India. Bhangra music blares and shop windows display saris, while a halal restaurant features beef ribs, fried chicken and daal.

Head east from the same station, however, and within a few blocks, signs of South Asia give way to Mexican taco stands, Colombian, Peruvian and Ecuadoran restaurants, and the rhythms of Latin music.

Jackson Heights, Queens is one of the most diverse places in the nation. Half of the neighborhood’s residents speak Spanish. Others speak Chinese, Urdu, Hindi, Russian, Portuguese, Greek or Korean. Altogether, the neighborhood is said to be the home of 167 languages.

And it’s this medley of cultures that is the subject of Frederick Wiseman’s 190-minute documentary “In Jackson Heights,” which, with subtlety and humanity, explores life amid these sharp ethnic juxtapositions.

Thomas Jefferson feared that city life, in contrast to that of a farmer who worked his own land, led to economic dependency that was incompatible with democratic citizenship.

Progressives in the early 20th century railed against the poverty and corruption of cities, but they also saw them as dynamic places that could, with reform, become crucibles of a vigorous democracy. African Americans who left the rural South with the hope of building better lives in northern cities discovered the limits of their country’s democratic promises.

And while Donald Trump fulminates against Mexican immigrants, he fails to acknowledge that Latino immigrants prevented New York and other cities from experiencing catastrophic population losses in the 1970s and 1980s.

Today, cities and their surrounding regions are sites of great ethnic diversity, driven by immigration and deepening economic inequality.

Yet even as immigrants head for the suburbs in ever increasing numbers, it is in cities – with their dense populations and vigorous street life – where the trials of becoming an American, and the pains of globalization, are playing out in real time.

The view from the pavement

“In Jackson Heights” gets at all of these issues through its exquisite attention to the minute rhythms of life in one neighborhood.

Wiseman’s opening shot looks down on a grid of streets beneath the number 7 elevated subway train. Then he quickly descends to the street level. His film lyrically depicts multicolored shops, men praying in a mosque, a meeting of LGBT residents at the Jewish Center of Jackson Heights and a gathering at the local office of Make the Road New York, an organization that fights for Latino and working-class communities.

Most of my ventures into Jackson Heights in Queens over the last 30 years have been to eat Indian food on 74th Street. Wiseman’s film, however, shifted my attention to the Latinos of Jackson Heights and their precarious economic situation, which is threatened by gentrification.

The film’s genius lies in its attention to individual speakers’ eloquent descriptions of their predicaments, translated in subtitles where necessary. In one scene, a woman recounts a harrowing border crossing. In another, a man says to other Latinos, “We give our lives and our sweat so this nation moves forward! Let’s be proud of ourselves, of our work, and of our countries.”

Uniting around a cause

In heterogeneous Jackson Heights, getting city dwellers to organize around common goals is one of the great challenges of democratic politics.

The past is a reminder, however, that solidarity reaps rewards.

In the early 20th century, Jewish and Italian garment workers marched together to win better working conditions. During the Great Depression and World War II, immigrants and their children in New York City – led by Mayor Fiorello LaGuardia and supported by federal New Deal programs – made Gotham a more just and egalitarian city.

The urban New Deal order collapsed under its own contradictions (it didn’t serve blacks as well as it served whites). Still, as I learned while researching my book “Crossing Broadway: Washington Heights and the Promise of New York City,” upper Manhattan was saved from housing decay, arson, high crime and the worst effects of poverty by the combined efforts of Dominican, Jewish, Irish and African-American activists.

As Wiseman details in his film, the accomplishments of LGBT activists in Jackson Heights have allowed the community to learn to live with differences and oppose violence.

I was dimly aware that Jackson Heights had a history of anti-gay violence. But I was shocked to see memorials to two murdered gay men – Julio Rivera, killed in 1990, and Edgar Garzon, slain in 2001 – barely four blocks from the street where I had dined for years in Indian restaurants. Those killings sparked community organizing and political action that led to the election to the city council of a former public school teacher named Daniel Dromm.

In Wiseman’s film, Dromm ably reconciles the specific needs of his constituents with his generous commitment to social justice. From leading community meetings to marching in the Queens LGBT Pride Parade, Dromm’s concrete achievements and unfinished struggles suggest the capacity of ordinary New Yorkers to embrace ideals of inclusion and equality that seemed very distant only 30 years ago.

The looming specter of gentrification

In the shadow of gentrification, however, economic diversity – and justice – seem far less assured. The hard work of the immigrants who animate “In Jackson Heights” is not, by itself, enough to ensure their future in New York City.

The immigrant workers in Jackson Heights face not just the kind of chiseling bosses that could be found in sweatshops a century ago, but the new challenges of globalization and gentrification. Where the LGBT movement could change the neighborhood by gaining political power and changing attitudes, it’s clear that addressing the economic inequalities that bedevil immigrants will require even more elusive structural changes on a citywide, regional, national – and even international – scale.

Of course, no single neighborhood is New York City in microcosm. A film about another part of the city – southeast Queens, for example, with its large African-American communities – might be able to say more about the racism that continues to blight African-American urban life.

Nevertheless, by looking closely at one neighborhood, Wiseman has revealed some large and important truths about the many ways in which immigration, in all its human diversity, is creating a new United States of America.

Contrary to Jefferson’s concerns, these New Yorkers have more than enough energy to support themselves without falling into dependency. In their meetings and events, they tend to the public life of a democracy with energy and care. Their labor sustains the city and the nation’s economy.

When “In Jackson Heights” closes with the elevated number 7 subway speeding toward Manhattan as fireworks burst overhead, it seems that the urban future of the American dream is in good hands – as long as the people of Jackson Heights don’t get priced out. 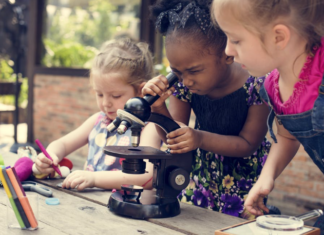