Do you remember the “Announcerless Game?”

On December 20, 1980, an otherwise insignificant game between the New York Jets and Miami Dolphins, teams trudging toward the end of dreary seasons, became famous – or infamous – because of a controversial experiment by the NBC television network.

There would be no play-by-play announcer and no analyst. Host Bryant Gumbel was visible near the field, but only to introduce and occasionally restate the concept, not to pass along information updates. Some rudimentary statistics marking the game’s progress were displayed on screen, without commentary.

More than 35 years later, broadcast announcers operate in a sometimes-uneasy alliance with a flood of information.

Consider the advances in communication technology. A little more than three months before the attention-grabbing NBC experiment, The New York Times sent its reporting staff (including me) into stadium press boxes with clunky, occasionally fickle, noise-sensitive computers called TeleRam Portabubbles. The sports communications industry had barely escaped an era that required the use of carbon paper to make multiple simultaneous copies of text written on typewriters.

Televised sports had not yet conceived a way to continually present essential information such as time and score. Game officials were more than five years away from the first replay system to change incorrect calls. Viewers were decades from today’s innovations:

As the telecasts unfold on high-definition, wide-screen televisions, fans check real-time statistical updates or engage with other fans on a mobile device. The high-profile evolution of fantasy sports leagues and companies – a potentially lucrative business that is being examined by the legal system – may have permanently altered the concept of fan loyalty.

All of this has changed the way we have grown to watch the game.

The quarterbacks watch differently too. Just look at the old footage to compare the responsibilities of Peyton Manning of the Denver Broncos and Cam Newton of the Carolina Panthers with those 49 years ago laid upon Bart Starr of the Green Bay Packers and Len Dawson of the Kansas City Chiefs, quarterbacks from the first Super Bowl.

The complex Kansas City offense would eventually become known as the “Offense of the ’70s.” But the necessary rate of today’s decision-making process, and the digitally driven preparation that powers it, have taken that complexity to new levels.

The same is true of the presentation of the game. Images that once required waiting until the next day’s newspaper, or the following week’s edition of Sports Illustrated, are now captured in real time and available on your iPhone – if you’re not too busy tweeting your own commentary on that last play.

In search of information overload?

When NBC muted its announcers for a day and relied solely on on-screen information displays, Stan Isaacs of Newsday, one of the most respected media columnists in the nation, was underwhelmed by the statistical overload.

A pox upon all their statistics. The glut of numbers that often clutter up newspaper stories had the same mind-numbing effect on screen. We were being told a lot more than we wanted to know. If this experiment was designed to show that there were areas that announcers can cut down on some chatter, it should also have shown that we can do without all those infernal numbers. Bright idea: let’s try another experiment, a telecast without visuals.

Isaacs went on to amend his idea, offering one suggestion: timely, vital information such as down and distance. The technology provided that a long time ago.

Halfway to Super Bowl 100, there appears to be no such thing as more than we want to know. We crave the numbers. We demand more information.

Here’s hoping that the innovations to come do not stifle the role of the announcers, with all of their knowledge, insight, humor and the good sense to respond to that bolt-of-lightning moment by remaining silent while bringing us all those remarkable, unforgettable images.

Malcolm Moran covered 11 Super Bowls for The New York Times, has watched all 49, and rooted for Joe Willie Namath and the New York Jets just once. 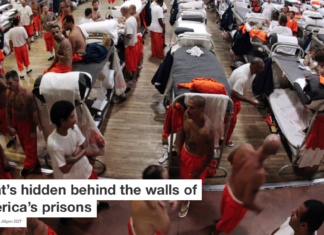 What’s hidden behind the walls of America’s prisons

Staff Writer - June 5, 2017
Heather Ann Thompson, University of Michigan Few Americans fully appreciate just how many of their fellow citizens are ensnared in the criminal justice system. Some...

Teaching kids social responsibility – like how to settle fights and...