Days earlier, these employees had voted 25 to 2 to join the Writers Guild of America-East, exercising their right to collectively bargain under the National Labor Relations Act.

Ricketts did little to hide his motives. In a Sept. 12 blog post, he had written that “unions promote a corrosive us-against-them dynamic that destroys the esprit de corps businesses need to succeed…. It is my observation that unions exert efforts that tend to destroy the Free Enterprise System.”

While his animus toward unions is unambiguous, less clear is whether he violated the National Labor Relations Act. But even if his shutdown were to be determined illegal, any remedy for the terminated workers may be years (or decades) in the offing.

The story speaks to the growing clout of billionaire media owners, the flagging power of America’s unions and the need for the labor movement to build grassroots support if it wants to prevent similarly draconian actions from taking place.

The newspaper industry and unions have a long history. One of the earliest unions formed in the newsroom was the American Newspaper Guild, founded in 1933. The guild (now renamed the NewsGuild) has evolved to represent 24,000 employees performing a variety of jobs, from reporters and editors to graphic designers.

However, over the past several decades, rapid technological change and growing competition for readers and advertisers have strained labor-management relations in the industry.

Between 1960 and 1965, for example, 108 strikes took place in the newspaper industry. The 1990s witnessed another wave of high-profile strikes, including the staffs of papers such as the New York Daily News (1991), Pittsburgh Press and Post Gazette (1992) and Detroit News and Free Press (1995-1997). In the wake of declining ad revenue over the past decade, unionized newsrooms, from the Baltimore Sun to the San Francisco Chronicle, have engaged in concessionary bargaining to try to keep the newspapers viable and preserve as many jobs as possible.

Despite this adversity, unions in this sector have adapted, intensified their organizing efforts and shown signs of revitalization. According to the U.S. Department of Labor, the Writers Guild of America-East has grown its membership from 3,810 in 2005 to over 4,500 in 2017. The Writers Guild-West has gone from 7,627 members to over 23,000 during the same period. And the NewsGuild has organized the employees of digital news sites like VICE, HuffPost, The Root, The Intercept, Deadspin and Gizmodo Media Group.

Union representation offers a range of concrete benefits for these media employees. They get a voice in matters that influence professional autonomy; they retain the right to access the work they’ve produced if they leave the company; they’re put in a better position to negotiate wage and benefit packages; and they get representation in grievance procedures if they’ve been disciplined or fired. (Indeed, the workers at the Gothamist who voted to unionize sought these very benefits.)

Do billionaire owners hold all the cards?

While labor-management relations in the media industry have a history punctuated by conflict and tension, the closing of an entire business operation in response to a pro-union vote has taken confrontation to new heights in the industry, reflecting the enormous power that a billionaire mogul possesses.

Joe Ricketts, who is one of several billionaire owners of news outlets – along with Jeff Bezos, John Henry, Glen Taylor and Sheldon Adelson – has certain advantages when dealing with unions compared to publicly traded companies. Unlike public companies – which have to oblige stockholders – Ricketts has unfettered managerial control. The top executive of publicly traded newspapers, such as News Corporation or The New York Times Company, simply could not summarily shut down the firm.

Ricketts also has a diverse business portfolio. He founded TD Ameritrade, a public financial services company that had nearly US$3.5 billion in revenue in 2016. Worth over $2 billion, with investments in several ventures (High Plains Bison, The American Film Company and the Chicago Cubs), Ricketts can afford to dislodge a venture without risking financial hardship. Past family owners of a newspaper, such as the Chandlers (The Los Angeles Times) or the Grahams (The Washington Post), didn’t have this luxury.

Finally, Ricketts made his move during a period of weakened unions, which have endured decades of continual decline. Less than 7 percent of the private-sector workforce is unionized, which means that, in order to mobilize effectively, labor has to garner support from large swaths of the nonunion workforce.

The possibilities – and perils – of a lawsuit

Ricketts might be operating from an advantageous position. But is what he did legal?

The Writers Guild-East and its allies, who held a protest rally in New York’s City Hall Park on Nov. 6, are exploring their legal and other options. (They have already negotiated severance packages for the terminated employees at DNAinfo and the Gothamist.)

As for the legality – it depends on how the courts interpret precedent.

The U.S. Supreme Court’s ruling in the 1965 case of Textile Workers Union v. Darlington Manufacturing Co. might offer some clues.

In this case, Darlington’s workers had narrowly approved representation by the Textile Workers Union of America in March 1956. That September, the owner of Darlington convened a meeting of the board of the parent company, Deering Milliken, and they voted to close the manufacturing facility.

The National Labor Relations Board had ruled that the closure – because of its anti-union retaliatory motive – was illegal. The Supreme Court, however, determined that an employer had the right to close its business, regardless of the motivation, writing that “when an employer closes his entire business, even if the liquidation is motivated by vindictiveness toward the union, such action is not an unfair labor practice.” On the other hand, a partial closure – say, closing one plant in a multi-plant manufacturing company because that one plant voted to unionize – would defy the National Labor Relations Act.

The critical question, then, was whether Darlington was a standalone business or represented, instead, a part of the larger Deering Milliken enterprise. The court ordered that the case be reheard to determine the status of Darlington as a standalone entity.

In 1968, a U.S. Court of Appeals ruled that the closure of the facility in response to the union vote constituted a partial closure of a business, which could exert a harmful effect on efforts to unionize other parts of the overall business. It wasn’t until 1980, however, that a settlement was reached between the union and the company, which awarded $5 million to the affected strikers or their estates.

This suggests that Ricketts may have run afoul of interpreted law if DNAinfo and the Gothamist are deemed part of his larger business enterprise. Such a determination will undoubtedly involve intricate legal and technical considerations.

But there’s another lesson to be learned from Textile Workers Union v. Darlington Manufacturing Co.: With 24 years passing between the closure of the facility and the financial settlement, it’s clear that you can’t rely on the courts for a timely remedy.

Perhaps the only viable option for the jettisoned workers can be taught by the history of the worker protests of the 1930s, when vigorous grassroots economic and political pressure resulted in a shift of public opinion in support of unions and the election of numerous pro-labor lawmakers to Congress. During this period, a transformative political alliance was built between labor and the Democractic Party that led to several laws and policies favorable to workers.

Employers who show brazen disregard for the will of their employees will only change if faced with adverse repercussions. The Writers Guild of America-East has the power of the proverbial pen, and it could orchestrate a public relations campaign to inflict disrepute on Mr. Ricketts’s business operations.

At the same time, I believe that labor, more generally, should continue cultivating public support of unions. If the public won’t support labor in a struggle against a businessman bent on denying employees a legitimate voice, there isn’t much hope. 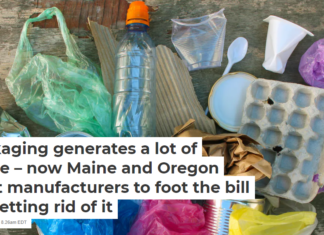