In Sin City, people often do bad things to themselves.

Rather than deal with their lapses – moral, financial, marital – there’s a ready-made marketing slogan to fall back on: “What happens in Vegas stays in Vegas.”

It’s a way of permitting yourself to indulge, and Vegas casinos – built on a manic dynamic of gambling, sex and food consumption – make their owners billions of bucks off this mantra.

Although living a long 60-mile desert drive from the city, Stephen Paddock spent most of his time there gambling. How did a seemingly happy habitual casino player conjure up serial murder by killing and injuring hundreds using enough firepower to equip a small army?

As an urban sociologist, I’ve written about how Las Vegas operates as a “themed environment,” one that channels the power of fantasy to promote a form of boundless, excessive indulgence.

We may never know Stephen Paddock’s true motives. But what if his horrific act were to be interpreted through this lens of fantasy and indulgence?

The power of theme

The famous French literary critic Roland Barthes was the first to discuss the multilayered power of “the sign” as a myth that can project multiple meanings, while uniting them under the umbrella of a “megatheme.” For example, he saw the Eiffel Tower as a structure that fused early industrialization with modernity, as well as the international symbol of Paris.

The American semiotician Charles S. Peirce had a similar name for this phenomenon; he called it an “icon.” Think of the American flag. It means different things to different people and, simultaneously, the same thing to millions.

Any themed environment, from Disneyland to the Olive Garden, uses an overarching message to unite consumers around a single purpose, whether it’s a reverie of youthful innocence or the prospect of an abundant, family-style Italian dinner.

These signals – conveyed and repeated through architecture, design, advertisements, logos and slogans – have the power to attract large audiences in a way so that each individual can find something meaningful in the consumer experience.

I argue that in Las Vegas, the sign of “excess” is the unifying element of its themed environment. And I’ve compared its culture to that of Dubai, a Middle Eastern city that has experienced rapid development over the past 20 years.

Yet the two are distinct. In Dubai, excess is purely symbolic and simplistic, with every material object directly alluding to it. Hotel rooms cost thousands of dollars a night. They come with gold faucets, gold beds, gold bedding – gold everywhere.

You don’t need to be rich to go to Las Vegas. But its excess is palatable, with threads that work through a range of connotative associations. Buffets compete for the privilege of serving the most food; casinos promote games with the allure of “whale” level jackpots; luxury goods, gold or otherwise, saturate hotel rooms and shopping malls; and spectacular shows take place on a nightly basis. Excess in Las Vegas cues the lizard brain to indulge and spend.

Although people may imagine that they journey there to be winners, they are merely on a conveyor belt of excessive consumerism the moment they step off the plane. When casinos began a copycat period of renovations in the late 1970s, they started incorporating shopping malls and Godzilla-scale buffets, inventing a closed circuit of excessive spending.

Today, fantasies of the Old West, Ancient Egypt, the circus and tropical paradise are built into casino environments that, at their core, simply offer different flavors of the same thing: manic gambling, eating, drinking and sex.

Perhaps this is why Ceasars Palace has no apostrophe after the “r.” In Las Vegas, everyone can be a Roman emperor, even if they cannot be an Arab prince.

We don’t know much about Stephen Paddock, the mass murderer. But we do know that he wagered excessive amounts of money every day. It was his way of life, and he could afford it.

Excess is also one way to end your life. Just look at “La Grande Bouffe,” James Gandolfini, Orson Welles or any celebrity who took what’s called an “overdose” to die.

“Smokin’ Aces” was a 2006 Hollywood film directed and written by Joe Carnahan. It tells the story of an assortment of assassins who have been ordered to kill a Las Vegas entertainer set to testify against a casino mob boss. The heavily armed assassins converge on a hotel where the entertainer is holed up awaiting trial; one sets up a M82 50 caliber sniper rifle on a tripod, similar to Paddock. The ensuing mayhem results in at least 20 law enforcement officials and civilians dead or wounded.

Of course, this was only a fantasy. Nobody died. New York Times film critic A.O. Scott called it a “dumb film,” adding that it might cause “dumbness in others.” Carnahan, the auteur, went on to do two more “Smokin” films, so popular was the (dumb) original.

There’s something fitting about Las Vegas being a place where a fictional fantasy ended up mirroring tragic reality. In the wake of the shooting, conspiracy rumors abound. Law enforcement officials and the news media report little about Paddock’s motives. I don’t possess any more knowledge than they do.

However, I do wonder if Paddock, as he slapped those automatic rifles onto tripods, had Las Vegas-style excess – high stakes, big numbers, bright lights, the book of Guinness – dancing through his mind. 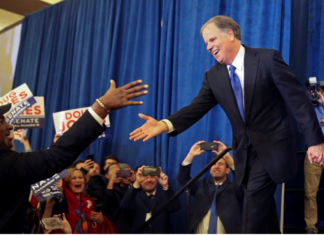 April 15 is the day tobacco companies pay $9 billion for...