Donald Trump’s remarks in the aftermath of the Orlando shooting massacre – especially the reiteration of his call to temporarily ban Muslim immigration to the United States – angered leaders across America’s political spectrum.

“This is not just a national security issue,” Trump said. “It’s a quality of life issue. If we want to protect the quality of life for all Americans – women and children, gay and straight, Jews and Christians and all people – then we need to tell the truth about radical Islam and we need to do it now.”

Barack Obama called these words “dangerous” and against “democratic ideals.” House Speaker Paul Ryan added that the “vast majority of Muslims in this country and around the world are moderate, they’re peaceful, they’re tolerant, and so they’re among our best allies.” And Hillary Clinton called Trump’s ideas and approach “shameful.”

As scholars of political rhetoric, we see parallels in Trump’s speech to leaders and candidates who have tried to use fear to unite voters.

However, Trump takes the use of this rhetoric to a new level, using narrative devices that translate fear into anger, evoke doomsday scenarios and demonize entire groups of people.

United against a shared threat

In the 1980s, a group of social psychologists developed Terror Management Theory, which is based on our (uniquely human) awareness that death is inevitable. According to the theory, people become anxious and scared when they’re reminded of this fact. This fear, in turn, makes them more likely to coalesce around a shared identity or worldview: a religion, country, culture or ideology.

Of course, the vivid drama of terrorist attacks – people covered in blood, 911 calls, bodies piled up – are an especially effective means for reminding people of their own human frailty.

After attacks, politicians sometimes seek to capitalize on this vulnerability, turning speeches and press conferences into opportunities to rhetorically place the “nation” and cherished “freedoms” as at risk. The attack on a few becomes an attack on all. When speakers do this successfully, they are able to unite voters through a sense of shared threat.

In his address to the nation after the Pearl Harbor attacks, for example, Franklin Roosevelt declared that there would be “no blinking at the fact that our people, our territory and our interests [were] in grave danger.”

His remarks that day, which became known as the “Infamy Speech,” are generally regarded as having been crucial to Roosevelt’s ability to both unite and reassure the public, while also marshaling widespread support for the country’s formal entry into World War II.

George W. Bush used similar rhetoric on the night of September 11, 2001, when he said that the American “way of life [and] very freedom [had come] under attack in a series of deliberate and deadly terrorist acts.”

Bush’s approval ratings shot through the roof as political differences were cast aside in favor of national unity.

But, like almost all things Trump, the candidate’s use of an already familiar rhetorical trope has been more sweeping than those that came before.

From fear to hate

Trump’s discourse, both leading up to and following the Orlando shooting, begins with a pathos of fear but ends with an appeal to anger.

In rhetoric, pathos refers to arguments that appeal to the emotions of the audience, and appealing to emotion comes with inherent dangers. Yoda may have put it best in “Star Wars” when he warned, “Fear leads to anger. Anger leads to hate. Hate leads to suffering.”

While Donald Trump may be no Jedi Master, his use of a pathos of fear suggests he is betting that he can turn the tail end of Yoda’s warning – hate – into votes.

This requires, however, not so much the creation of fear – terrorism is real, and the Orlando shooting really happened – but, rather, finding ways to rhetorically stoke particular anxieties that already exist in the popular American consciousness: Crime. Unemployment. Lost freedom. Forgotten values.

Having raised these possibilities, Trump’s next step is to present what amounts to a narrative of redemptive hate. Here, Trump offers to assuage the voter’s fears through a mechanism of separation, as he erects a rhetorical wall between the desirable “us” and the undesirable “them.”

Pick one or the other

Trump’s speech given in response to the Orlando shootings reveals exactly how a political rhetoric of fear can create a dangerous rhetoric of division and anger.

Trump’s rhetoric of fear begins with a framing device. He instructs his listeners to choose between two competing ideologies. They can continue to hold onto a “politically correct” worldview that makes it impossible to call a bad guy a bad guy, which, according to his (convoluted) logic, allows terror to happen. Or they can embrace his worldview, which will “straighten things out” and “make America great again.”

Law professor Molly Wilson has pointed out how language that nudges listeners towards a particular option can be exceptionally persuasive, because it can cause individuals to change their minds far beyond their original preferences. In short, choices can be inspired – and limited – based on how they are presented.

If you ask your toddler whether he would prefer a turkey sandwich or tomato soup for lunch, you have framed his choices and limited his options. As adults, we know there are other choices he would probably prefer, like ice cream. But even there, you have set a misleading frame, because turkey sandwiches and tomato soup are hardly the only healthy choices for lunch, nor is ice cream the only unhealthy one that is available.

Politicians do the same thing in their rhetorical framing of issues, Trump markedly so. The way Trump presents it, you can either have political correctness and terror or insensitivity and freedom. To put it more bluntly, you can have Muslims and death or no Muslims and life. There are no other options.

A world on fire, a foe shared by all

Having set out this black and white worldview, Trump raises the stakes again by using apocalyptic language.

Just minutes into his June 13 speech about the Orlando attack, he aroused the possibility that – unless he’s elected president – the United States might cease to exist.

“If we don’t get tough and if we don’t get smart, and fast, we’re not going to have our country anymore,” he said. “There will be nothing, absolutely nothing, left.”

In addition to framing, rhetoricians refer to premises like the one Trump makes here as argumentum in terrorem, which is a form of logical fallacy stipulating that the failure to accept a premise will result in irreparable harm.

Studies have shown how when people are afraid, they tend to overestimate the probability that the thing feared will really happen. Wilson, the political framing expert, also notes that people are irrationally intolerant of risk when there is a potential for catastrophe. And Trump’s rhetoric is rife with catastrophic possibility.

Finally, while Trump establishes fear through his apocalyptic words, he transforms that fear into actionable anger by creating a common enemy. In the Orlando speech, the common enemy is the Muslim. At other times in the campaign, Trump has demonized Latinos to similar effect.

The famed rhetorical theorist Kenneth Burke once critiqued Adolf Hitler’s tome “Mein Kampf.” There, Burke observed that “men (sic) who unite on nothing else can unite on the basis of a foe shared by all.”

For Trump, the enemy is the Muslim, whether he’s a terrorist or not.

“The Muslims have to work with us… They know what’s going on. They know that [the Orlando shooter] was bad. They knew the people in San Bernardino were bad. But you know what? They didn’t turn them in,” he said the day after the Orlando shooting.

This is the rhetorical creation of a nameless, faceless enemy to fear. The gunman from Orlando has faded from view. Indeed, Trump goes so far as to say he’ll “never say his name,” leaving the listener to connect the dots and oppose anyone who might be like him in the least.

And so the circle is complete. Fear becomes anger. Anger becomes hate. 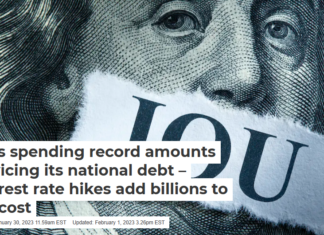 US is spending record amounts servicing its national debt – interest...

Trump for the Nobel Peace Prize? Japan’s nomination is part of...