Western Australia is an interesting place. No, really! True, lots of students from Asia think Perth’s a bit ‘quiet’, but at least local politics is getting a bit more exciting. Indeed, our state premier, Colin Barnett, seems to have been channelling Karl Marx to judge by some of his recent statements.

It’s not only the fact that comrade Colin famously declared that Beijing is more important to Western Australia than Canberra that leads some people – alright, just me so far, but keep reading – to think that our leader may have departed from the capitalist road. Remarkably and revealingly enough, the premier has launched an entirely unprovoked attack on some of the local captains of industry.

To be fair, I probably need to qualify the term ‘industry’ in this case. The target of premier Barnett’s outrage is the resource sector, which isn’t exactly a byword for the sort of sophisticated value-adding that we’ve suddenly decided might be worth preserving after all. The plutocratic potentates who are the subject of his ire are not that local either: Australia’s resource sector is actually overwhelmingly foreign-owned and controlled, of course.

Be that as it may, the reason I suspect that the premier may have become a closet Marxist – I put it no more strongly than that at this stage – is that his analysis of the resource sector’s activities bears an uncanny resemblance to the sort of thinking we imagined had become a discredited historical curiosity in the wake of the Soviet Union’s demise.

Radical left-wing readers of a shamelessly biased site such as The Conversation will need little reminding that one of Marx’s big ideas – key insights his apologists would claim – is that there is something inevitable about the concentration and centralisation of capital. In other words, there is a sort of Darwinian logic to the way big business operates as it drives out smaller, weaker producers.

The recent activities of Rio Tinto and BHP are, according to the man who seems to be Marx’s most influential local disciple, designed to achieve precisely that end. For those readers who think I’m making this up, let me quote Colin Barnett himself:

I find it a strange policy, indeed a flawed policy, that the major iron ore producers would be putting more and more product into a declining, soft market … I find it strange that the companies are acting seemingly in a concert way.

Strange, indeed, unless you’re a student of the Bearded One, of course. It’s worth remembering that premier Barnett was at one time a ‘university lecturer’, which as any informed person knows is generally a synonym for a self-indulgent, publicly funded whinger who is entirely out of touch – or even more worryingly, dissatisfied – with the real world.

Some might attribute the premier’s recent radicalism to the fact that WA’s financial position is a mess and the budget estimates are also wildly out of touch with reality. Barnett claims this is largely a consequence of the ‘conspiracy’ to drive down the price of iron ore and the royalties it generates.

In this regard the premier has no one but himself to blame, though. His government has indulged in a totally unjustified and unaffordable bout of infrastructure ‘investment’ that also bears an uncanny resemblance to the sort of thing they do in China – with equally disastrous effects.

It’s also important to remember what the premier’s principal intellectual influence predicted about the long-term fate of capitalism: it would inevitably be undone by its own supposed ‘internal contradictions’. Am I alone in thinking that the premier may be contemplating seceding and declaring the ‘People’s Republic of Western Australia’? Recent events in Scotland remind us anything is possible.

In this regard, at least, I don’t think we have too much to worry about, though. The market forces that the premier now seems to distrust if not despise have already worked their magic in this state. The resource sector now dominates both the economic and the political life of Western Australia. And let’s not forget that the miners also saw off that other ideological upstart, Kevin Rudd, who also knew a bit too much about China, come to think of it.

The mighty miners shouldn’t have too much trouble putting Barnett back in his box either. After all, iron ore royalties now account for more than 20% of the WA budget. Indeed, the resource sector might actually be doing the Barnett government a favour: the budget crisis is forcing the premier to give up on his left-wing agenda and push through cuts in the public sector and reduce wasteful infrastructure spending.

Barnett would be well advised to take another look at his Marxist text book. He needs to remember that the state is supposed to be ‘the executive committee of the bourgeoisie’, not its principal critic. Even his heroes in China have given up being communists. It’s about time the premier did, too.

Mark Beeson does not work for, consult to, own shares in or receive funding from any company or organisation that would benefit from this article, and has no relevant affiliations. 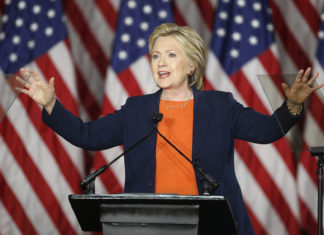 Staff Writer - August 26, 2016
Fueling the on-liners to retaliate with names like-calling like "Grandma," they encouraged the mainstream exposure.