In May, President Donald Trump authorized a plan to arm the YPG, a Kurdish militia in Syria. A month later, the YPG and their Arab partners in the Syrian Democratic Forces began the fight to take the Syrian city of Raqqa back from the Islamic State. While the U.S., Russia and Jordan agreed to a ceasefire in southwest Syria that went into effect Sunday, the intense battle for Raqqa continues in the north of the country.

Turkey, a NATO ally and U.S. partner, is fiercely opposed to providing weapons to the YPG because Turkey considers the fighters to be terrorists. But the Pentagon insists arming the Kurdish fighters is essential to beating IS in Syria.

Is the Pentagon right that the benefits outweigh the risks? Is it ever a good idea to increase the lethality of violent nonstate actors? These are questions I address in my research on the long-term effects of providing such aid.

Arming Kurdish and Arab fighters with heavy machine guns, mortars and anti-tank weapons to support operations against IS is not an entirely new development. U.S. Special Forces have been training and equipping the Syrian Democratic Forces since at least 2015.

This is also just one recent example of U.S. security assistance to partner forces around the world. The United States is turning to this foreign policy tool with increasing frequency, but the U.S. has a long history of arming proxy forces in a wide range of locations around the world.

Most security assistance goes to the regular armed forces of recognized states like Egypt and Israel. But, according to the Security Assistance Monitor, approximately 14 percent of publicly disclosed security assistance, and an unknown amount of covert assistance, currently goes to irregular forces – rebels, mercenaries and other nonstate groups. Over the past two decades, the U.S. Department of Defense, State Department and Central Intelligence Agency have trained, armed and advised nonstate armed groups in Iraq, Afghanistan, Libya, Syria, Angola and elsewhere.

So what are the risks of transferring military capabilities to nonstate armed groups?

One serious concern is that weaponry provided to a sympathetic group will end up in the hands of hostile actors. For example, weapons, ammunition and vehicles given by the U.S. to Syrian rebels have been found in the possession of the al-Qaida affiliated al Nusra Front. And a 2015 report from Amnesty International claims that IS built much of its arsenal by capturing weapons manufactured in the U.S. and Russia from the U.S.-allied Iraqi military and Syrian rebels.

Armed groups can also use their training and weapons to commit atrocities against innocent civilians. Afghan leaders trained and equipped by the U.S. to fight the Taliban are now heading militias accused of kidnapping, extortion and human rights violations.

Another risk is that members of the armed group can switch sides. Hundreds of Sunni fighters put on the Department of Defense payroll between 2006 and 2008 to fight al-Qaida in Iraq were reported to have rejoined the insurgent movement after U.S. troops began to withdraw in 2009.

These negative outcomes are not simply bad luck or a result of the clumsy execution of particular security assistance programs. Providing weapons to violent nonstate actors creates textbook conditions for what social scientists call principal-agent problems.

Principal-agent problems are most severe when the parties’ motivations and goals are not the same. Uncertainty about the motives of the agent and circumstances that make it difficult for the principal to monitor the agent’s behavior make the problems worse. If the principal is also unable or unwilling to fire the agent for poor performance, the agent is free to use the principal’s resources to do as she pleases.

The priorities and motivations of violent nonstate actors in foreign countries will rarely be closely aligned with those of the U.S., even if they share a common adversary. While the U.S. is arming Kurdish fighters to combat IS, many of the Kurdish militia’s leaders see Turkey as a greater threat. In addition, if the Syrian Democratic Forces capture Raqqa from IS, American and Kurdish interests are likely to diverge over who will govern the Arab majority city.

Moreover, by design, rebel groups, paramilitary organizations and other violent nonstate actors are difficult to monitor. Constantly shifting membership, leadership and alliances are typical of militant organizations. This also makes it extraordinarily difficult to screen potential aid recipients to make sure leaders will maintain control of weapons stockpiles and foot soldiers.

Finally, even if a state becomes aware that its agent is behaving badly, governments providing lethal aid are slow to cut ties. Although the state holds the purse strings, it has limited leverage over the agents it arms. This may sound surprising. But it makes sense if you consider armed groups have many ways to get weapons, but states have fewer options if they want to combat a threat in a foreign country without committing their own troops to the fight. Proxy warfare almost always involves choosing local allies from a limited set of imperfect options.

In fact, military aid can create perverse incentives – encouraging recipients to act recklessly or shirk on fulfillment of tasks knowing they are unlikely to lose funding for behaving badly, but will lose the contract when their tasks are fulfilled.

Despite the risks, the U.S. and its allies will continue to provide assistance to nonstate armed groups. Providing military assistance to a domestic opposition group is a means, however imperfect, of combating foreign threats without the human, material and political costs of committing large numbers of troops to combat. Partnering with local forces is playing a larger role in U.S. security strategy because perceived threats to American interests are dispersed across the globe and public support for large-scale military deployments is low. In addition, evolving U.S. military doctrine recognizes that local forces can have levels of local knowledge, cultural sensitivity and legitimacy a foreign force could never attain.

Moreover, there are situations in which providing lethal assistance to a nonstate actor could be the least-bad feasible policy option. Syria, for example, presents the leadership of the U.S. and other capable states with practical, political and moral dilemmas – and no good options. Arming the YPG runs all the risks outlined above, plus it angers a key ally. On the other hand, a brutal dictator is indiscriminately massacring his own population and the Islamic State is terrorizing innocent civilians. Over 400,000 have died and up to five million people are seeking refuge in other countries.

How can policymakers anticipate the unintended consequences of a decision to arm a nonstate actor, or weigh the costs and benefits of providing lethal aid against those of withholding such assistance? Unfortunately, empirical evidence is thin because the data required to do systematic, unbiased analyses are so hard to attain.

My own research suggests that the arms and ammunition supplied to a combatant in wartime can perpetuate a state of insecurity in the region long after the war has officially ended. A recent study concludes that security force assistance can achieve some limited goals, but only if states make aid conditional and intrusively monitor recipients. The reality is the conditions under which the U.S. trains, equips and advises armed opposition groups are seldom conducive to either. 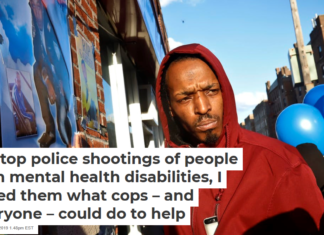 To stop police shootings of people with mental health disabilities, I...

Yes, we should be keeping the healthier hand-washing habits we developed...