Recent months have seen a sharp jump in the value of the greenback, with more gains expected in the months ahead. After a period of prolonged weakness, the US currency once again is walking tall. Americans may be forgiven for feeling unsure about what it means. Should we take joy in the dollar’s strength, or should we be worried? A realistic answer is: a little of both.

First, some historical perspective. It is important to remember that currencies are like roller coasters. They go up and down repeatedly, often with lightning speed. This is hardly the first time the greenback has muscled its way upward. Over the years there have also been other periods of remarkable strength, and even as recently as 2009 the dollar hit a peak well above today’s highs. Sooner or later, the greenback can be expected to weaken again.

But of course the roller coaster may not turn down for some time. Until it does, we need to ask: why is the dollar back, and what does it mean for Americans?

The dollar is back primarily because the US economy is back – at least compared with major trading partners. The WSJ Dollar Index, which measures the greenback against a basket of currencies including the yen and euro, reached a five-and-a-half-year high earlier this month before retreating slightly over the last couple weeks.

While Europe and Japan remain mired in stagnation and China’s growth continues to slide, America’s economic engine seems to be picking up momentum, powered by improved consumer confidence, a recovering housing market and a steep decline of energy costs. With the Federal Reserve poised to start nudging up interest rates in 2015, investors are flocking back to the United States in anticipation of rising earnings.

Are governments abroad adding to market pressures, deliberately driving their currencies down in order to gain advantage in world markets and boost their exports? The temptation to manipulate exchange rates is ever present, particularly at times of sluggish growth. But there is little evidence so far of direct currency intervention.

The exchange rate movements we see are largely the consequence of portfolio rebalancing by major institutional investors. As capital leaves their domestic markets, governments are happy to tolerate the resulting depreciation – or even to add a few words of encouragement – because their goods become cheaper to buy in other countries, bolstering their economies. But few have tried overtly to amplify or accelerate it. No one wants to trigger a nasty currency war.

Until lately, the stance of US policy makers was notably benign. Typical were the remarks earlier this month of Stanley Fischer, vice-chair of the Federal Reserve Board of Governors, who suggested that “exchange rates are changing to reflect what is going on … That is appropriate.” But as the roller coaster appears to be gaining speed, Washington’s tone has begun to shift. On the eve of the recent annual meeting of the International Monetary Fund, Treasury Secretary Jacob Lew made a point of reminding his foreign counterparts of their need to avoid competitive depreciations.

“It is especially important that all countries adhere steadfastly to their exchange rate commitments”, he declared, “and not target exchange rates for competitive purposes.”

The danger, of course, is that if foreign currencies continue to depreciate, the United States will steadily lose ground in global markets. A higher dollar adds to the price of US exports and lowers the cost of imports, hurting wide swaths of the American economy.

With globalization, Americans have become increasingly dependent on foreign markets and sources of supply to sustain our material well being. The great risk of a stronger greenback is a loss of competitiveness that could stop the US economic recovery in its tracks.

A bonanza of benefits

But that is not the only consideration to keep in mind. As consumers, Americans all gain from cheaper imports – everything from t-shirts and toys to Samsung Galaxies and BMWs. Likewise, foreign tourism becomes less expensive and foreign assets cost less in US dollar terms. For Americans fortunate enough to be able to travel or invest abroad, a stronger dollar is a bonanza. And companies that sell their goods and services domestically such as drug store chain CVS Health Corp and retailer JC Penney also benefit as their import costs go down.

Consumers will have to fork over less cash to grab the latest Samsung Galaxy or Apple iPhone.
Shutterstock

Nor should we forget the broader benefits that the United States, as a nation, enjoys as a result of the global pre-eminence of the greenback. Far more than any other currency, the dollar is popularly used around the world for a variety of critical purposes – as a medium to invoice and settle trade, as a store of value for international investments, and as the principal component of central bank reserves.

From these roles Washington gains an extraordinary privilege: the ability to spend abroad in our own currency, which in turn makes it much easier to pursue critical foreign policy goals without worrying about where the money is coming from. A rising exchange rate, reinforcing the greenback’s appeal, helps ensure that Washington’s privilege will continue.

In short, the dollar’s strength brings reward as well as risk. Joy and worry are both warranted.

Benjamin J Cohen does not work for, consult to, own shares in or receive funding from any company or organisation that would benefit from this article, and has no relevant affiliations. 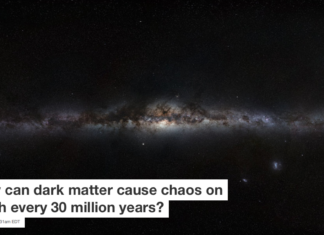 How can dark matter cause chaos on Earth every 30 million...

Staff Writer - May 6, 2015
Michael Rampino, New York University In 1980, Walter Alvarez and his group at the University of California, Berkeley, discovered a thin layer of clay in...

The EPA is banning chlorpyrifos, a pesticide widely used on food...