Although hydrogen is the lightweight of the chemical elements, it packs a real punch when it comes to its role in life and its potential as a solution to some of the world’s challenges. As we celebrate the 150th anniversary of the periodic table, it seems reasonable to tip our hat to this, the first element on the table.

Hydrogen is the most abundant element in the universe, but not on Earth due to its light weight, which allows the gas to just float off into space. Hydrogen is essential to our life – it fuels the sun, which converts hundreds of million tons of hydrogen into helium every second. And two hydrogen atoms are attached to one oxygen atom to make water. Both these things make our planet habitable.

Not only does hydrogen enable the sun to warm the Earth and help create the water that sustains life, but this simplest of all the elements may also provide the key to finding a clean fuel source to power the planet.

Hydrogen’s yin and yang as an energy source

Like many other chemical elements, although hydrogen is of immense value to us, it also has a darker side. Being lighter than air, it makes things float, which is why is was used in early airships. But hydrogen is highly explosive, and in 1937 the German airship the Hindenburg exploded on its attempt to dock with its mooring mast after a transatlantic journey, killing 36 people.

Hydrogen’s cousins, deuterium and tritium, called heavy hydrogen, have been used to make hydrogen bombs. Here, the heavy hydrogen atoms merge together in a process called nuclear fusion to make helium, a bit like the reaction that takes place in the sun. The amount of energy produced by this process is greater than any other known process – the area at the center of the explosion is essentially vaporized, generating shock waves that destroy anything in their way. The bright white light produced can blind people many miles away. It also produces radioactive products that are carried in the air and cause widespread contamination of the environment.

Taming the beast, however, could be the solution to the energy problems of the future. When burned in a controlled way, hydrogen offers the cleanest fuel, producing only water as the waste product. That’s refreshing when compared with a gasoline engine that produces climate change-inducing carbon dioxide and a range of other nasty gases. When stored under high pressure and very low temperature of -400 degrees Fahrenheit, hydrogen exists as a liquid, and its combustion with oxygen is used for propelling rockets into space.

However, a car with a tank of highly explosive hydrogen rocket fuel doesn’t sound like a safe bet. There’s currently lots of research focused on solving the storage problem. Large numbers of scientists are trying to develop chemical compounds that safely hold and release hydrogen. This is actually a hard nut to crack and is something that will take time and many great minds to solve.

The power of hydrogen

Hydrogen atoms also give things like lemon juice and vinegar their distinctive tart taste. Positively charged hydrogen atoms, called protons, having been stripped of their only electron, float around in these solutions and are the key component of acids. The chemistry of these protons is also responsible for driving photosynthesis, the process whereby plants turn light energy into chemical energy, and powering many processes in the human body.

Protons also are the key component of fuel cells. Rather than burn the hydrogen, fuel cells convert it to electricity and are seen as the way of the future. They do this by splitting the hydrogen gas into protons and electrons on one side of the fuel cell. The positively charged protons move over to the other side of the cell, leaving behind the negatively charged electrons. This creates a flow of electricity between the sides of the cell when connected with an external circuit. This current can power an electric motor placed in this circuit. Hydrogen-powered trains are already in operation in Germany, and several international car manufacturers are developing fuel-cell powered cars. Again, the only byproduct of the process is water.

In the future, I think we will see increasing use of hydrogen as a fuel. For it to be useful, there are two major challenges. A big one is the storage issue. Engineers need to figure out how to store hydrogen safely and start to build places where people can fill up. With rapid advances in chemistry and engineering, hydrogen stations could start to appear soon, becoming as commonplace as gasoline filling stations are today. This sort of infrastructure is going to be essential. You don’t want run out of fuel on a journey because, unlike a gas-powered car, you can’t call a friend to bring you a canister of hydrogen.

The other challenge is obtaining the hydrogen itself. There is very little naturally occurring hydrogen gas available to us because it floats up and out of the atmosphere. Instead, it has to be made from some other source and captured.

At the moment, the majority of the world’s hydrogen is produced either from wood or from fossil fuels, such as natural gas and oil. This defeats the object of it being a clean source of energy. The biggest source of hydrogen is the safest, most readily available liquid on Earth: water. If we chemists can find better ways to break down water molecules and take the hydrogen atoms out of it, this would be a huge step forward. 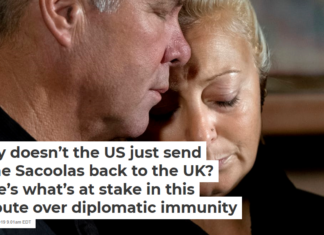 Staff Writer - November 2, 2019
David Banks, American University School of International Service The U.S. and U.K. are engaged in an international dispute about the right to diplomatic immunity. On August...