Of course you know that eating is vital to your survival, but have you ever thought about how your brain controls how much you eat, when you eat and what you eat?

This is not a trivial question, because two-thirds of Americans are either overweight or obese and overeating is a major cause of this epidemic. To date, the scientific effort to understand how the brain controls eating has focused primarily on brain areas involved in hunger, fullness and pleasure. To be better armed in the fight against obesity, neuroscientists, including me, are starting to expand our investigation to other parts of the brain associated with different functions. My lab’s recent research focuses on one that’s been relatively overlooked: memory.

For many people, decisions about whether to eat now, what to eat and how much to eat are often influenced by memories of what they ate recently. For instance, in addition to my scale and tight clothes, my memory of overeating pizza yesterday played a pivotal role in my decision to eat salad for lunch today.

Memories of recently eaten foods can serve as a powerful mechanism for controlling eating behavior because they provide you with a record of your recent intake that likely outlasts most of the hormonal and brain signals generated by your meal. But surprisingly, the brain regions that allow memory to control future eating behavior are largely unknown.

Memories of last meal influence the next

When researchers impair the memory of a meal by distracting healthy participants while they eat – such as by having them play computer games or watch television – people eat more at the next opportunity. The opposite is also true: enhancing meal-related memory by having people reflect on what they just ate decreases future intake.

Patients suffering from amnesia do not remember eating and will eat when presented with food, even if they have just eaten and should feel full. And memory deficits are associated with overeating and increased weight in relatively healthy people.

So what’s going on? We all know that we don’t eat just because we’re hungry. Most of our decisions about eating are influenced by a myriad of other influences that have nothing to do with how hungry or full we are, such as time of day, the sight and smell of food, or an advertisement for a favorite restaurant. My lab has chosen to focus on memory, in part, because it is something that is adaptable and more within our control.

We’ve started our search by focusing on a brain region called the hippocampus, which is absolutely vital for personal memories of what, where and when something happened to you.

Interestingly, hippocampal cells receive signals about hunger status and are connected to other brain areas that are important for starting and stopping eating, such as the hypothalamus. My colleagues and I reasoned that if hippocampal-dependent memory inhibits future eating, then disrupting hippocampal function after a meal is eaten, when the memory of the meal is being stabilized, should promote eating later on when these cells are functioning normally.

Effect of turning neurons off, then back on

In my lab, we tested this prediction using optogenetics. This state-of-the-art method uses light to control individual cells in a behaving animal. We were able to inhibit hippocampal cells for 10 minutes before, during or after rats ate a meal.

To do this, we inserted a specific gene into hippocampal cells that caused these cells to immediately stop functioning as soon as we shined light of a certain wavelength on them. The cells remained inactive as long as we shined the light. Crucially, their function returned to normal as soon as we turned the light off.

We discovered that optogenetically inhibiting hippocampal cells after rats ate a meal caused the animals to eat their next meal sooner and caused them to eat almost twice as much food during that next meal. And remember, the hippocampal cells were working normally by the time the rats ate again. We saw this effect after the intervention whether the rats were offered rodent chow, a sugar solution, or water sweetened with saccharin.

That rats would eat more saccharin after we interfered with their hippocampal function is particularly interesting because saccharin is a noncaloric sweetener that produces very few of the gastrointestinal (GI) chemical signals normally generated by food. We concluded that the effect we saw after inactivating hippocampal cells is most likely explained by an effect on memory consolidation, rather than by an impaired ability to process GI messages.

Thus, our findings show that hippocampal cells are necessary during the period following a meal for limiting future energy intake. We suggest that neurons in the hippocampus inhibit future eating behavior by consolidating the memory of the preceding meal.

These findings have significant implications for understanding the causes of obesity and the ways in which to treat it. Scientists, including my research group have shown in previous studies that feeding rats too much fat or sugar impairs hippocampal memory. Similarly, overeating and obesity in humans are associated with hippocampal damage and hippocampal-dependent memory deficits.

Impaired hippocampal functioning, in turn, leads to further overeating and weight gain, leading to a vicious cycle that may perpetuate obesity. Our research adds to the growing body of evidence that suggests that techniques that promote hippocampal-dependent memories of what, when and how much one eats may prove to be promising strategies for reducing eating and promoting weight loss. 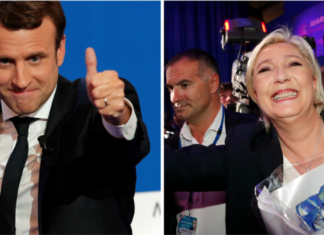 Staff Writer - April 23, 2017
Mabel Berezin, Cornell University The votes are mostly counted in the first round of the French Presidential election. Marine Le...

Boeing: why the Ukraine crisis could help it become the world’s...

New telescope will scan the skies for asteroids on collision course...