Imagine yourself as the first naturalist to stand in a place where little recorded scientific knowledge exists, like Alfred Russel Wallace in the Malay Archipelago or Alexander von Humboldt in the Americas in the early 1800s. The notes you record will expand humanity’s scientific knowledge of the natural world, and the specimens of plants and animals you collect are destined to be used for centuries to describe past and present biodiversity and make new discoveries in biomedicine and beyond.

Now, imagine if those specimens were never collected.

That’s what it’s like if samples from the field are not archived. Natural history museums are the guardians of specimens, ensuring their future availability to the scientific community on shelves, in libraries and through curated online databases. Yet, despite scientists continuing to sample the natural world, many specimens are not ending up in biorepositories. If specimens are not archived, the next generation of scientists will inevitably have to reinvent the wheel, spending more time and money resampling the world’s species and geography to answer future questions.

There’s a variety of reasons that specimens don’t get saved, including insufficient museum-based training among newer generations of scientists, poor funding of natural history collections and a lapse in data priorities from organizations that fund and disseminate scientific knowledge.

In a new paper published in the journal BioScience, we and our colleagues outline how existing loopholes in U.S. federal data policies, backward data priorities by scientific journals and a culture of data ownership have made it too easy for research specimens to be discarded. This problem stands to hamstring scientific progress. But, it’s not too late to change.

When archived in museums, specimens – literally, the bones, skins and tissues of biodiversity – can be used and reused to answer new scientific questions over time, including many of societal concern.

An all-too-familiar example these days is the use of preserved tissues to trace the origins of zoonotic diseases – that is, diseases that come from animals. Most emerging diseases in people are zoonotic, including COVID-19, rabies, MERS and Ebola.

Properly preserved wildlife specimens, often collected for a completely different purpose – wildlife conservation or ecological research, for example – make museum biorepositories a vital player in public health research. Each archived sample can be used to identify the wildlife sources of a disease, monitor changes in disease prevalence and distribution over time, and identify environmental variables that may lead to spillover into people.

In the early 1990s, an unknown lethal virus jumped into humans, killing 13 people in the American Southwest. Mammal specimens, originally sampled for other reasons and preserved at the Museum of Southwestern Biology, were used by researchers to identify the pathogen as a hantavirus and its wildlife source as deer mice. Museum specimens also provided evidence that the virus had been circulating in Southwestern rodent populations for over a decade, and its emergence in humans was linked to El Niño climate cycles. In this way, museum collections provide hard evidence for rapid, scientifically informed public health guidance.

Unfortunately, the origins of COVID-19 have been harder to pinpoint – in part because the number and diversity of specimens available to the scientific community, particularly from Asia and other remote regions, is decreasing.

The U.S. government has started to prioritize genomic data security, but it is not the first to recognize the importance of these data. Currently, the majority of American genetic data is owned by foreign entities, most notably Russia and China, as a consequence of lax international biosecurity measures and substantial foreign investment in genomics and biomedicine.

This policy is a step in the right direction, but it fails to address equivalent archival requirements for specimens – the raw material for many DNA sequences used in biodiversity and biomedical research. The irrevocable loss of specimens poses a major risk to national security, public health and science.

Other federal agencies are also taking steps in the right direction, but there is room for improvement. For example, recent updates to the U.S. Geological Survey’s data policies extend “FAIR” principles to species – meaning specimens must be Findable, Accessible, Interoperable and Reusable. USGS also holds the specimen’s collector responsible for ensuring its long-term care. Although these policies apply to USGS scientists, they’re a good model of specimen stewardship for the entire scientific community.

Unfortunately, in extreme cases, the same policy also allows specimens collected with federal funds to be destroyed if deemed “no longer of value or potential use [to] USGS.” Given the irreplaceable nature of specimens, we argue that destruction is rarely justifiable. Instead, preservation of specimens in museums at the conclusion of a project better aligns with national mandates to ensure open publication of federal data and helps meet the responsibility of making these data available to the public.

Scientific journals can set a priority

As federal guidelines take shape, scientists themselves have a responsibility to ensure responsible specimen archival to foster the democratization of biological science through increased access.

One place to act may be during the publication of research papers – a cornerstone of the scientific enterprise.

More than half of the top 100 journals in ecology, evolution, behavior and systematics mention or require the permanent archival of DNA sequences. But fewer than one-fifth have similar requirements for specimens. If specimens are preserved, DNA sequences can always be regenerated.

Inconsistent data requirements across journals mean that authors can skirt the responsibility of archiving specimens by sending their work to journals with looser policies. During the peer-review process of both grant proposals and research papers, scientists – as editors and reviewers – have an opportunity to encourage responsible specimen archival.

A history of ownership versus stewardship

Inconsistent specimen archival may also reflect the broader approach to science, much of which is passed down from early Western naturalists – like Wallace and von Humboldt. There is a persistent ethos of data ownership, rather than stewardship, born from competition among scientists that ultimately fosters a fear of being scooped.

The famous 19th-century correspondence between Charles Darwin and Wallace, which prompted Darwin to quickly finalize his own writings on natural selection, is one example of such competition. But the tension over “who found it first” is still with scientists today. Museums have protocols in place to allay many of these fears, including delayed data release policies and temporary embargoes that allow researchers to finish projects before their data are made available to the public.

We and our colleagues have proposed guidelines aimed at turning the corner on downward trends in specimen preservation. We recommend integrating specimen stewardship plans into existing requirements for data management plans, by treating specimens as the primary data they are. Early collaboration, budgeting and planning between researchers and natural history museums will be essential to ensure that physical space and financial resources are available to store new collections. Normalizing specimen archival with museums will build a rich foundation of genetic resources for the next generation of scientists. 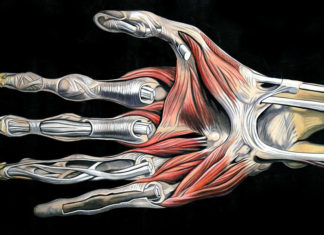 Staff Writer - October 15, 2014
By Michael Rudnicki, Ottawa Hospital Research Institute Skeletal muscle is the tissue that makes our bodies move in a voluntary way, so we can walk,...

Why can’t you remember being born, learning to walk or saying...

Zoos and aquariums shift to a new standard of ‘animal welfare’...