When ABC News reported there could be $75 Billion in damages caused by Hurricane Ian, we wanted to highlight what some of the hard-working American families at ground zero have been facing. For privacy purposes we’ve changed their names while all other details remain factual.

For the typical survivor of a declared National Disaster such as Hurricane Ian, recovery can be an extremely long and costly process supported by government agencies and insurance companies. The Federal Emergency Management Agency (FEMA) is often the first agency to assist survivors. When Hurricane Ian was about to make landfall, President Biden spoke from a televised FEMA office, encouraging would-be survivors to quickly apply for help. The Small Business Administration (SBA) works closely with FEMA to identify and support survivors through SBA’s emergency disaster loans to jumpstart their recovery. Insurance companies are also expected to quickly step up to the plate to support premium paying survivors’ journeys back to recovery. With potentially $75 billion or more in damages, here’s a close look at how three different survivors were supported by these trusted institutions.

Patrick Garland is a senior citizen who uses a walker to get around. His home was in the inner eye wall of Hurricane Ian when it struck land. When his ceiling started dripping in the living room, he moved toward the inner hallway. When his ceiling opened up to the sky, dumping insulation and drywall all over the living room floor, the wind pressure blew his bedroom and bathroom doors open.

He had to hold onto the bathroom door frame to gain enough leverage to hold his bedroom door shut over the following three hours. Fortunately, the roof above the middle of the home did not cave in on him and he came out alright. A framed Beatles poster was the only thing that miraculously stayed fixed to the wall next to him. This was not his first hurricane, but in the coming days he said he had never seen a more disorganized and useless response from FEMA’s first responders. In other hurricanes, he said, they went door to door in an organized manner, marking them with spray paint in order to let everyone know those houses had been checked. Not this time, he said. For several days, nobody came by.

Neil Shannon is an elderly veteran. His home and vehicle were destroyed by Hurricane Ian. By the time FEMA’s Disaster Recovery Center opened in his county, nine days had already passed after Hurricane Ian hit. He was quick to point out “Emergency” in Federal Emergency Management Agency seemed more like a talking point than a reality for FEMA. After traveling for two hours to sit in line at a Disaster Recovery Center, he was turned away by the front attendant. She said “we need to close the line because it takes two hours to get through the line and one hour to help people. Because of this, we are no longer taking people.” This was three hours before closing time. Dozens of people, including a homeless family with young boys, were turned away. There was no consideration for the fact it was only 3pm and FEMA’s website encouraged people to get there anytime until 6pm. Someone at that Disaster Recovery Center had made the decision that they’d close their lines down three hours early because of the number of people that showed up. Neil would have to make the two hour trek back to his destroyed home and try to make the trek again the next day. He didn’t know where he would stay that night.

Terry and Sara Gordon have two boys, ages 5 and 9. Before the hurricane, they had savings, worked from home, and paid their taxes and insurance bills. When their vehicles stopped working due to Hurricane Ian and their home was destroyed to the point of being unable to live in it, they immediately reached out to FEMA and went to their Disaster Recovery Center, who referred them to the SBA, who told them to be sure they filed a claim with their insurance company. Terry and Sara filed claims and applications with all three organizations; FEMA, the SBA, and their insurance company. Since then, they’ve been forced to live out of motel rooms, Airbnbs, and sometimes the streets. Double bookings and lack of accommodations left them without a place to stay on many occasions. After several weeks of not hearing from FEMA, SBA, or their insurance company, a public adjustor worked with other inspectors and determined there was nearly half a million dollars of damages made to the Gordons’ home and property. When calling FEMA, SBA, and their insurance company, they all tell the Gordons to wait longer. We reached out to FEMA and the SBA on their behalf. After touching base with FEMA’s top brass, including Director of Public Affairs Jaclyn Rothenberg, we were told by FEMA’s Press Secretary, Jeremy Edwards, that the Gordons’ case could not be discussed without a signed release form from the Gordons.

After the Gordons provided the required signed release form, FEMA and the SBA went completely silent. We haven’t heard from them since. It’s now been nine weeks since Hurricane Ian landed on the Southwest Florida coast in September. Aside from $700 provided by FEMA after the first few days (enough to pay for hard-to-find lodging, food, and transportation for only two days), the Gordons have not received a single penny, any shelter, food, necessities, or transportation support from FEMA, the SBA, or their insurance company. Zero dollars, zero help, zero support. After admittedly breaking down into tears too many times to count since Hurricane Ian made landfall, Terry and Sara told us with the 500% increase in their daily costs due to being displaced, they’ve now run out of money, don’t know where they’ll stay next week, and have not heard back from FEMA, SBA, or their homeowners insurance company. Making matters worse, right before Thanksgiving, both FEMA and the SBA call centers told the Gordons their applications for disaster assistance had been withdrawn. The reason? Terry shared, “FEMA and the SBA both told us our applications were withdrawn because we had requested to withdraw our applications. They lied about that. We absolutely never requested to withdraw our applications. We have desperately needed those funds to pay for food and shelter and to start rebuilding our lives.”

Terry Gordon said it best when he asked us, “is this America?”

UPDATE: We’ve seen an unprecedented response to this article and have received an overwhelming number of inquiries regarding this report. We plan to publish an update this Friday, December 2, 2022.

If you are displaced, homeless, or suffering from Hurricane Ian damage and still have not received more than $700 in combined assistance from FEMA, the SBA, and your homeowners insurance providers please send an email about your situation to Jeff Greenberg at team@lifeandnews.com 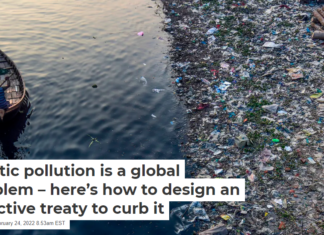 Staff Writer - February 27, 2022
Sarah J. Morath, Wake Forest University Plastic pollution is accumulating worldwide, on land and in the oceans. According to...

Facebook became Meta – and the company’s dangerous behavior came into...