Daily interactions require bargaining, be it for food, money or even making plans. These situations inevitably lead to a conflict of interest as both parties seek to maximise their gains. To deal with them, we need to understand the other person’s intentions, beliefs and desires and then use that to inform our bargaining strategy.

New research published just in the Proceedings of the National Academy of Sciences suggests that this skill develops remarkably early in childhood, as early as age seven.

Theory of mind, or ToM, is the intuitive understanding of one’s own and other people’s minds. By understanding that other people can have thoughts different from our own, it enables us to infer what they are thinking. And because people act on their intentions and desires, we can use this to predict their behaviour. For example, if your friend leaves the house with an umbrella, we understand that it is because she thinks it will rain.

This skill underpins almost every social interaction. Notably it is thought to be one of the key abilities that is absent in autism.

A crucial test of this theory is the ability to attribute false beliefs to others. For example, if a child was to tell you that she is putting her tooth under the pillow for the tooth fairy, although you know that the tooth fairy does not exist, you understand that her behaviour is being driven by the mistaken belief that it does.

Children start learning some of these skills needed to spot false beliefs quite early in life. For example, some two-year-olds seem to have an understanding that their thoughts can be different from the state of reality, as shown through pretend play, which starts to develop around this time. Similarly, it seems three-year-olds have an awareness that thoughts exist. For example, they understand mental entities have different properties to physical ones – that is, you can’t touch a dream. But the ability to attribute false beliefs to another person does not develop till children are older than four.

This is one of the most robust, and fundamental milestones in early cognition. Interestingly, it also explains why three-year-olds are terrible liars. You can’t deceive if you don’t have a theory of mind.

While we know there are significant developments in their understanding of such skills between the ages of three and four, we know little about how it develops in older children. Also, given its importance in deception, little research has looked at theory of mind’s role in strategic thinking and bargaining.

The new study looks at children’s ability to combine theory of mind with strategic thinking, which the researchers call “strategic theory of mind”. This addition involves understanding not just beliefs, desires and intentions but adding a layer of why people may have them. This additional layer involves incentives and is best illustrated by an example.

Suppose John has an incentive to lie to his wife, Mary, about where he went last night. Similarly, Mary knows that John will lie so she will not believe him. However, John conducts the same reasoning process and decides that Mary will know he is lying. Therefore, he concludes from this that he is better off telling the truth.

The study wanted to test this ability in a group of three to eight-year-olds as well as adults in a competitive environment. Children played games covering two prevalent aspects of social interaction – competition and deception.

In the first game, a child and an experimenter selected between one and five stickers. Whoever selected fewer stickers got to keep all the stickers, while the other player received nothing. If both players selected the same number, neither kept any stickers. Interestingly, they found that most children younger than four years couldn’t help taking five stickers, even though this strategy always lead to a loss. In contrast, seven-year-olds chose the optimal strategy of choosing one or two stickers, similar to adults.

The other game involved one player, a sender, communicating to the other, a receiver, about the location of a sweet by pointing at one of two boxes. If the receiver correctly guessed the location, they kept the sweet, and otherwise the sender kept it, giving the sender a potential incentive to deceive. They found that when those older than age seven played the sender, they used a highly sophisticated strategy used by adults. They were mainly deceitful, but with occasional acts of honesty to ensure the experimenter did not always select the other box.

Why does this skill emerge at age seven? Could it be that what is developing is children’s increasing ability to suppress unhelpful responses?

Young children are remarkably bad at suppressing the urge to say or do something they want when it is not appropriate or helpful to do so. For example, it could be that children perform badly because the thought of the sticker or sweet that they want overrides their ability to think strategically. This would explain why younger children can’t help but grab all the stickers, and why they can’t help pointing to the box with the sweet despite this meaning they lose them. Research has shown this is an important factor in children’s ability to play strategic games.

The lead author of the paper, Itai Sher at the University of Minnesota, said:

We think that for the oldest children, the decisions are explained by forward-looking behaviour. In both the stickers game and the sender-receiver game, children appear to perform a greater number of steps of recursive thinking as they age.

Another possibility is that children’s working memory helps performance on the task. This cognitive skill allows children to keep in mind goals and information. The skill would be crucial for remembering the rules of the game and keeping track of the other person’s behaviours.

In line with this, the researchers found that children with better working memory were more likely to use sophisticated strategies on the stickers game. They also found that working memory significantly developed between the ages of six and seven. The next steps, Sher suggested, will be to identify why this skill suddenly emerges at age seven and how working memory relates to this important skill. 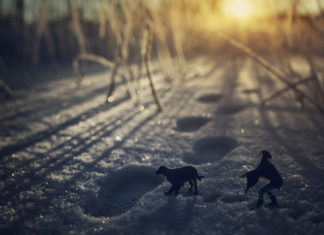 Staff Writer - March 22, 2015
Sue Thomas, Bournemouth University This year some people might consider the idea of a digital detox vacation. Perhaps a trip to the Scottish Highlands, where...