It’s a big few weeks at the Environmental Protection Agency (EPA). The EPA issued a regulation clarifying its authority to regulate bodies of water throughout the country. This week it issued an “endangerment finding,” a precursor to a regulation governing carbon emission from aircrafts. There is also a plan to raise fuel efficiency standards on trucks. And within the next week or two, the Supreme Court will issue a ruling regarding whether the EPA unreasonably refused to consider costs when issuing its recent standard on mercury emissions from power plants.

But while it is a big few weeks, it is not an unusual few weeks for the Obama Administration EPA. The mercury, aircraft emission and clean water regulations are all examples of major policy initiatives taken by the executive branch of the government during this administration.

President Obama said in 2014 that in the wake of Congressional gridlock, he would use his “pen and phone” to make policy without Congress. In no policy area (save perhaps immigration) has that been more evident than in environmental policy.

Not surprisingly, President Obama’s opponents have reacted strongly to the policy-making through regulation.

The clean water rule was described as an “egregious power grab.“ Republican senators unhappy with EPA attempts to regulate greenhouse gases have spoken of the need to “rein in” the executive branch.

However, two of the premises behind these attacks are at best questionable. The first is that the Obama Administration emphasis on regulation is unprecedented, and the other is that issuing regulations is an unchecked exercise of executive power.

The use of executive power by a president to get his wishes, particularly in a second term, is extremely common.

Every two-term president since Franklin Delano Roosevelt has been confronted by a Congress with at least one house controlled by the opposition party in his second term. This severely constrains the ability of the president to affect domestic policy through legislation. As such, sometime around their second inauguration, presidents typically switch from a “legislative presidency” where they advocate for new laws in Congress, to an “administrative presidency” where they use their executive powers to enact their policy preferences.

Increasingly, that has meant using regulation as a policy tool. Statutes passed in the 1960s and 1970s gave the president considerable ability to set policy through regulation. The Supreme Court has repeatedly upheld the constitutionality of this delegation of power to the president from Congress.

Hence, all presidents from Carter through Obama have issued hundreds of significant regulations, and presidents all pick up the pace of regulating as their time in office grows short.

The second questionable idea behind cries of an imperial presidency is the thought that somehow it is easy to issue a regulation without public input. Nothing could be farther from the truth.

First, regulations must be issued pursuant to a statute passed by Congress. If parties burdened by a regulation think that the agency doesn’t have the right to issue the regulation, you can be certain that they will challenge the regulation in court. If you want to blame someone for regulations from the Obama Administration, blame the many Congresses that passed – and the many presidents that signed – statutes giving regulatory agencies their authorities.

Federal agencies (except in emergency conditions) must also accept and consider public comment before issuing a regulation.

While there is some debate over whether agencies adopt public comments (most research shows that they modify their regulations but rarely make wholesale changes) agencies are required to write responses to comments explaining why they did not make the changes requested. Otherwise commenters have grounds for a lawsuit.

When a regulation is finalized, the other two branches of government get another crack at it. Congress can pass a law to overturn the rule, although that law will need to be signed by the president or passed over his veto.

Any regulation of significance, particularly from the EPA, usually ends up as the subject of a lawsuit where judges can determine whether the action taken by the agency was arbitrary or capricious.

Supporters of regulation often bemoan how long it takes to complete the regulatory process. Much of this length comes from intents to make the process accountable to the public.

Once a regulation has run the gauntlet of the regulatory process and has been upheld by the courts, it is an enduring policy-making device.

For dealing with climate change, the Obama Administration would have preferred a carbon tax or a “cap and trade system” to the regulatory solutions that will come out in the months ahead. But those would have required new laws from a Congress that is not very good at passing laws. The regulatory solutions are a second-best solution, but if they are upheld by the courts, they will be an enduring and significant one. 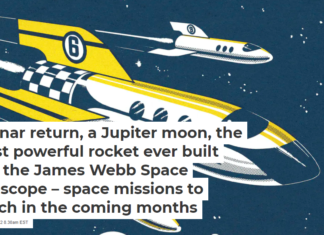 A lunar return, a Jupiter moon, the most powerful rocket ever...

Staff Writer - January 29, 2022
Chris Impey, University of Arizona Space travel is all about momentum. Rockets turn their fuel into...