For some sports stars, a certain level of adulation is just part of the job. But many are also now subjected to abuse and malicious campaigns on social media. It recently emerged that Liverpool FC have hired a therapist to help players deal with the effects of online trolling.

Our research examined the triggers for this kind of abuse, and how to deal with it. We looked at messages received on Twitter by the likes of Roger Federer and Cristiano Ronaldo, as well as other big names from a variety of sports.

Using a technique called “sentiment analysis” to rank posts from negative to positive, we found almost all the athletes were subjected to some level of abuse, involving criticism of their professional performances as well as personal insults.

At the milder end, a tweet might describe the target as “lazy and overrated”, or as someone who “never fails to disappoint in being so bad”. There were of course far more aggressive posts, many of which were laden with expletives.

Our study found that two events appeared to spark a peak in online abuse, both of which related to sporting performance. The first was a poor performance, and the second was a good performance – from supporters of a defeated rival team or player.

Our research also suggests that trolls are most likely to engage in abusive behaviour during or immediately after high stakes sporting competitions which provoke feelings of high anxiety or stress. But even away from the spotlight of sporting duties, athletes’ personal lives attract abuse, rumour and innuendo, with comments often targeted at a family member or friend. One athlete received abuse directed at their children.

Attempts have been made by various bodies to address this. In football for example, a large number of clubs and players took part in a four-day social media boycott in April 2021. The aim was to force social media companies to do more to tackle online abuse, with stronger preventative measures as well as greater accountability and consequences.

Yet just a few months later, following England’s defeat to Italy in the Euro 2020 final, a torrent of racist abuse was directed online towards Marcus Rashford, Jadon Sancho and Bukayo Saka after they missed penalties. This in turn led to shows of support for those players both online and in football stadiums. But our research suggests some pre-emptive measures may also help.

Athletes, particularly upcoming stars, would benefit from specific training on the challenges posed by social media platforms and how to manage their online profiles. These could be based around the Professional Footballers Association’s own recommendations, which include advice on how to avoid getting drawn into online confrontations and how content may be misreported or misinterpreted.

Another solution has recently been proposed by the Social Media Research Foundation, which argues that the power of moderation should be put into the hands of all users. This would allow athletes to select their own content moderators, so abusive messages could be hidden from view. A similar process exists on some online forums which have engaged members or employees who moderate and filter comments.

Athletes and governing bodies have raised concerns about the negative psychological effects of Twitter for professional athletes. And although a lot of attention has been focused on the roles of social media platforms, little has changed. So perhaps it is time to offer expertise and guidance directly to the potential victims.

Athletes need help to manage their personal profiles and media exposure to lessen the potential for abuse and reduce its impact. This doesn’t have to mean more boycotts. Our research suggests that better engagement with fans, and a sense of personal connection, can potentially overcome the perceived lack of consequences of their conduct towards athletes online.

Nor should it be forgotten that social media platforms also provide incredible opportunities for individual sports stars, who can attract huge numbers of followers, opening up lucrative sponsorship opportunities. They can help foster connections with grassroots sports and inspire young athletes. And as one of the most high profile victims of online abuse, Marcus Rashford, has shown, raise awareness for political causes. 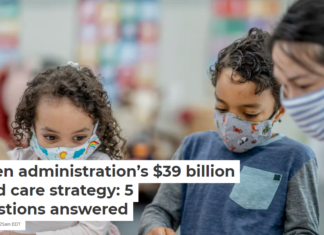 Staff Writer - April 19, 2021
Taryn Morrissey, American University School of Public Affairs States are getting US$39 billion from the federal government to support...

The US lacks adequate education around puberty and menstruation for young...

Over-the-counter hearing aids have been greenlighted by the FDA – your...