Demand for life-saving organ transplantation is at an all-time high. In 2021, a record 41,000-plus organ transplants were performed in the U.S., with top numbers for kidney, liver and heart transplants. But a limited supply of donor organs remains an ongoing problem. Currently over 100,000 people are on the transplant wait list in the U.S., and many more are unable to get on the list because of strict eligibility requirements and racial disparities in access.

As a cardiac transplant surgeon, I have personally witnessed the tragedy of this shortage of donor organs. But I have also seen the potential of one possible solution to this problem: xenotransplantation, or transplanting animal organs into human beings.

In September 2021, researchers successfully transplanted two genetically engineered pig kidneys into a brain-dead patient. And in January 2022, I was part of the surgical team that conducted the first pig-to-human heart transplant in a living patient. Recent news about the patient’s death two months after the procedure is sobering, but researchers like me remain optimistic. While much work still needs to be done, these successes point to how far science has come toward making animal-to-human transplants a viable treatment possibility. https://www.youtube.com/embed/Wqf3PXUngsE?wmode=transparent&start=0 The man who received the first pig heart transplant died on March 8, 2022, two months after the procedure.

While animal-to-human transplants have attracted considerable attention recently, many attempts have been made to transplant animal cells, tissues and organs into humans over the past 60 years, with varying degrees of success.

In the 1960s, kidney transplantation was not broadly practiced because of a lack of donor organs. Ethical and legal concerns made it difficult to obtain live donors, and organs collected from deceased donors did not meet much success.

So a surgeon named Keith Reemtsma performed a series of 12 kidney transplants using chimpanzees as donors. While most of the transplanted organs – and thus the human patients – survived for only a few weeks, one of the patients survived for nine months. Infection was the major issue in half of the patients, while irreversible organ rejection occurred in the other half.

Thomas Starzl is another surgeon who attempted animal-to-human organ transplants. He performed a similar series of kidney transplants around the same time as Reemtsma using baboons as donors, with the organs surviving up to two months. He’s most known for his liver transplants, with three attempts using chimpanzee livers from 1966 to 1974 that lasted from 24 hours to less than 14 days. In the early 1990s, his two baboon liver transplants lasted for 26 and 70 days. While one of the baboon livers functioned well, the patient ultimately died from overwhelming infection.

Doctors have also made attempts to transplant animal hearts, the first of which predated the first human-to-human heart transplant. In 1964, a chimpanzee heart transplanted by James Hardy survived for only a few hours. Len Bailey’s 1983 attempt at transplanting a baboon heart into an infant known as Baby Fae prolonged her life for 20 days, a record at the time.

While these early results may seem poor at first glance, a number of these transplants actually lasted longer than many early human-to-human kidney transplants. The first patient to receive a donated kidney lasted for only four days in 1933, and later attempts in the 1940s and 1950s yielded similar results. Immunosuppressing drugs that prevent the immune system from attacking donor organs also weren’t available at the time of these early attempts at xenotransplantation, pointing to the promise of these procedures as science advanced. https://www.youtube.com/embed/dCSiTpnNrMQ?wmode=transparent&start=0 A pig heart under examination by researchers at the University of Pittsburgh.

But transplanting organs across species faces a number of obstacles, the most integral of which is evolution. As species grow apart, increasing differences in their molecular makeup can result in incompatibilities that make cross-species transplant difficult or impossible. Among the most problematic are differences in immunity, inflammation and blood clotting that damage both the transplanted organs and the host’s body.

The similarity of nonhuman primates like chimpanzees and baboons to humans, both in anatomy and in their immune systems, made them appealing donors for early transplants. But their strong similarities to people also raised ethical concerns that dissuaded some physicians like Starzl from using them as donors.

On the other hand, pigs offer a potentially better source of donor organs. Compared with nonhuman primates, pigs mature much more quickly and produce more offspring. They are also a common source of food for people, and their tissues are already used for prosthetic heart valves and other medical treatments.

While pig-to-human transplants have also been attempted in the past, 80 million years of evolution stood in the way. Pigs have molecules on the surfaces of their cells that humans do not. If these molecules are introduced into a person’s body, their human immune system will register them as foreign and mount an attack. This process, called hyperacute rejection, is a central reason many transplanted animal organs fail. https://www.youtube.com/embed/xgBnYr0_FRk?wmode=transparent&start=0 Genetically engineering pigs to be more compatible with humans could help reduce the risk of organ rejection.

A number of advances that reduce these incompatibilities have helped overcome the problem of hyperacute rejection. Genetically engineered pigs without the genes that produce the foreign molecules triggering rejection and with additional human genes that help the recipient’s body accept the new organ are one key improvement. The pig heart my team and I transplanted this year was genetically engineered, as were the pig kidneys from late 2021. There have also been improvements in medications that suppress the immune system of the recipient so it’s less likely to mount an attack against the organ.

Recent successes with genetically engineered pig transplants make clear that xenotransplantation is no longer a dream from a distant future but something becoming increasingly achievable by modern medicine.

But many questions still remain. What is the best way to suppress a recipient’s immune system so the transplanted organ survives but the risk of infection stays low? Can animal organs be tailored to individuals to minimize rejection? How can animal organs be better preserved and distributed?

Answering these and many other questions will be key to realizing the therapeutic potential of xenotransplantation, and helping the hundreds of thousands of people waiting for an organ.

[Get The Conversation’s most important coronavirus headlines, weekly in a science newsletter] 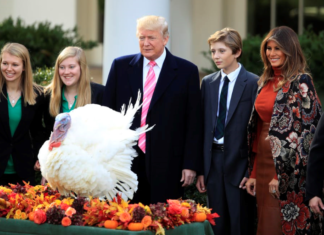 Staff Writer - November 22, 2018
Tobin Miller Shearer, The University of Montana President Donald Trump presided over presidential turkey pardoning, a ritual that has been in place since 1989, when...