The federal government’s Direct Action climate policy, a A$2.5 billion scheme aimed at paying polluters to cut their greenhouse emissions, is set to be approved in the Senate after a deal between environment minister Greg Hunt and Palmer United Party leader Clive Palmer.

The policy will see the government introduce its Emissions Reduction Fund, the centrepiece of the Direct Action plan, in exchange for agreeing to a review of emissions trading around the world – despite the government pledging never to return to emissions pricing after repealing the carbon tax in July.

The deal also earns a reprieve for the Climate Change Authority, which will carry out the emissions trading review having now been saved from the government’s earlier plan to abolish the agency.

Below, experts react to the new developments.

Direct Action is a subsidy scheme that gives taxpayers’ money to companies for claimed emissions reductions. It is vastly inferior to putting a price on emissions.

If a future Australian government is serious about significantly reducing emissions in an economically sensible way, then emissions trading or a carbon tax must be brought back.

It is sensible for the Climate Change Authority to investigate other countries’ emissions trading schemes, even though Minister Hunt called it a “gesture”.

The authority’s report will show that many countries have emissions trading schemes in place, and more are coming. Crucially, China now has regional carbon-trading schemes that cover more than twice the emissions under the scheme that was in place in Australia, and a national Chinese scheme is in preparation.

The Authority should also be asked to take stock of the many other policies that countries use to restrain their emissions. These range from aggressive energy-efficiency standards, to support for renewable energy and limits on coal-fired power generation, and of course energy and carbon taxes.

Australia is falling behind on practically all of these measures.

The Direct Action policy still gives a worrying sense of being on a diet but without stopping eating cream buns.

Of the standout issues, which I highlighted in my Conversation article in April, many still remain:

Probably the most peculiar thing in today’s announcement was Clive Palmer saying that an emissions trading scheme is the most important thing for Australia, and therefore we will wait until after the United Nations climate negotiations in Paris in December 2015.

In matters of climate policy, some countries lead and some watch others. If the targets are not reached, these policies will need to be reviewed and new policies introduced. The big question remains: who will be in government when this transpires?

As a Member of the Climate Change Authority, I’m naturally gratified to see that the value of our work has been recognised by the government and the Parliament. Much more important, though, is that the option of an emissions trading scheme has been kept alive and that it will be the subject of rigorous study.

The overwhelming view of economists is that a price-based measure such as an ETS is a critical component of a carbon-mitigation policy and a natural complement to policies of Direct Action.

What appears to be a compromise on climate policy for Australia will soon become reality, opening the way for carbon-reduction schemes to be put in place across the country. While the focus may be on emissions reduction by large emitters, the fact that the use of overseas carbon offsets has been rejected provides opportunities for organisations in Australian regions to capture some of the potential offset market.

With vegetation and soils having capacity to act as carbon sinks, there is no reason why some of the A$2.5 billion set aside in the government’s Direct Action plan cannot be used to pay for Australian-based offsets to cover that inevitable portion of emissions which will continue to be made under any climate policy scheme.

As we will always need energy, some level of emissions will continue to be produced, so let us consider how this relatively large sum of money can not only help to motivate carbon reductions from large emitters (through the Emissions Reductions Fund), but could also provide a hugely important (and much needed) economic stimulus for rural and regional Australia.

Hopefully, with Senator Xenophon’s proposed “safeguard mechanism” in place, we will be able to ensure that this policy will not just become an excuse to emit more carbon.

Reactions compiled with the help of the Australian Science Media Centre. 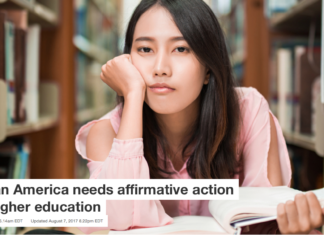 Staff Writer - August 8, 2017
Stacey Lee, University of Wisconsin-Madison and Kevin K. Kumashiro, University of San Francisco Affirmative action is back in the news, as The New York Times...