Parliament’s presiding officers, Speaker Bronwyn Bishop and Senate President Stephen Parry were hung out to dry by Tony Abbott over their ill-judged plan that veiled women would be segregated behind glass in the Parliament’s public galleries.

It’s a fair bet they’re still peeved. Before the House of Representatives resumes on Monday, they have to announce revised security arrangements. Abbott asked them to drop their interim edict (for which read, told them, although he can’t formally order them). So far not a peep has been heard from them as to whether they’ll simply reverse the decision or seek some third option.

As if this embarrassment isn’t enough, Parry has to face a Senate estimates committee on Monday morning where he and parliamentary officials will be quizzed about the fiasco. The hearing is chaired, as it happens, by Liberal Cory Bernardi, an outspoken critic of head coverings being allowed in Parliament House.

Labor’s forensic John Faulkner and other senators will be in pursuit of what prompted the presiding officers’ move, and any involvement by Tony Abbott’s office.

It’s said the Speaker and President acted in response to information that people with covered heads were readying for some sort of protest. No such event occurred. Also mysterious is that Abbott was given a note about the decision when he was in the House of Representatives chamber, but says he didn’t read it for some hours. One would think that when he is in the House the PM would only get notes of importance and so would routinely read them ASAP.

Clearing up the unfortunate so-called “burqa” issue, which should never have arisen in the first place, is important. More fundamental, however, is the second tranche of the government’s national security legislation, about which the parliamentary committee on intelligence and security reported on Friday, presenting 36 unanimous recommendations (plus another one, also unanimous, backing the passage of the bill).

While at first blush the large number of recommendations could suggest substantial changes are proposed, in fact this is a report that is welcome to the government. It leaves the legislation pretty much intact, with the thrust of the recommendations being for more oversight.

But there is also some political cover for the opposition.

For example, Labor won committee agreement for the sunset clauses in various areas be cut back from the decade the government wanted to 24 months after the date of the next federal election. These include the control order and preventative detention order regimes; the stop, search and seizure powers relating to terrorism offences; and the questioning and questioning-and-detention warrant regime. The committee would do a review of the various powers 18 months after the election.

On the provision to allow the Foreign Minister to declare certain areas to which people would not be allowed to go without a good reason, the committee’s recommendations are useful but limited.

It wants dropped the section enabling the minister to declare a whole country. But this does not mean a great deal because, first, that wasn’t expected to happen, and second, if there were such a need (say the Islamic State took over Syria) a declaration could be written in a way that the country was covered. There is also a recommendation that the proposed offence for entering or remaining in a declared area “sunset” two years after the next election.

Some free speech advocates, including Human Rights Commissioner Tim Wilson, as well as other critics, have been very concerned about the implications of the new offence of advocating terrorism. Under the legislation, a person commits an offence if they intentionally counsel, promote, encourage or urge the doing of a terrorist act.

The committee reports differences internally and has come up with the mild recommendation that Attorney-General George Brandis should “further clarify the meaning of the terms ‘encourage’, ‘advocacy’ and ‘promotion’” either by amending the legislation or in its explanatory memorandum.

The indications are that the government will sign up to the recommendations, as it did in total with those the committee made to the first tranche of its legislation. Brandis told the ABC what was being put forward was “very much at the margin”. The debate on the bill will be the week after next and the government wants it through by the end of that week.

Then comes the third tranche of the national security package, which will provide for the retention of metadata. Of the government’s three controversial pieces of anti- terrorism legislation that will be the most contentious. It’s fair to say this present bill has engaged the Muslim community more than the general community. The metadata legislation will be more provocative to a broader section of the population. 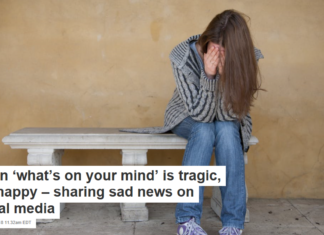 When ‘what’s on your mind’ is tragic, not happy – sharing...