· People can feel “psychological ownership,” a sense of personal attachment, even for parks and other public places.

· These feelings lead them to see property they don’t own as being more valuable and boost their sense of responsibility to take care of it.

Do you take walks on public trails? What happens when you encounter some trash?

If you respond just as you would at home by picking up the litter and disposing of it properly, you’re experiencing what marketing experts call “psychological ownership.”

That sense of ownership can develop in all sorts of situations. For example, you may develop feelings of ownership for a car or house you’ve picked out but haven’t paid for yet.

This behavior is at odds with an economic theory known as “the tragedy of the commons.” This theory holds that public lands and other shared resources can be neglected because there is no owner who feels obliged to take care of them.

Based on my research in this area, I’ve found that it is possible for people to feel a sense of ownership toward parks and other public places without actually owning them.

My colleagues Joann Peck, Colleen P. Kirk and Andrea W. Luangrath and I wondered whether we could get visitors to a park to act more like they owned the land.

While people often intuitively feel this happens all the time, we directly measured its occurrence while conducting a series of four studies.

First, we went to a lake in Wisconsin where people could rent kayaks and asked half of the kayak renters to come up with their own nickname for the lake. We then observed from shore whether each kayaker attempted to pick up strategically placed trash during their paddle. The kayakers who we asked to think of a nickname for the lake tried to pick up trash 41% of the time. That was way more than the 7% rate for everyone else.

Next, we asked half of the cross-country skiers at a public park to plan out their route on a park map. The rest got the map without those instructions. Again, the simple act of planning the route seemed to make a difference. The people who had planned a route were 2.5 times more likely to tack a donation onto their rental fees, and they also expressed more willingness to volunteer and to promote the park through social media.

The other two studies we did were online. We tested the impact of “Welcome to your park” signs and an attendance sign showing the number of visitors to a hypothetical park. Through this simulation, we found that the welcome signs would increase beneficial behaviors, while signs showing that there were many other visitors would have the opposite effect.

We hope that the managers of public parks take advantage of our findings. Welcoming visitors to “your” park or pondering a nickname for a lake is easy to implement and inexpensive. And yet they are effective ways to motivate and nudge people to care for these places, whether by volunteering, picking up trash or even promoting the area. 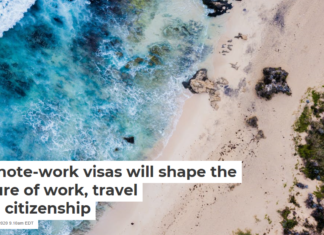 Staff Writer - September 2, 2020
Dave Cook, UCL During lockdown, travel was not only a distant dream, it was unlawful. Some even predicted that how we travel would change forever....

Drink problems at work got much worse during the pandemic –...