What do you think the opposite sex finds attractive in you? If you’re a guy, do you think that women prefer bulging muscles and washboard abs? Or, if you’re a woman, maybe you think men prefer skinny girls, like the ones we see on the catwalk? If so, you’re likely mistaken.

A wealth of research has shown us that we are all pretty awful at understanding the preferences of the opposite sex. These misunderstandings are at the root of body image and self-esteem issues, causing people to engage in behaviours that are at best unnecessary, and at worst damaging to their health.

The recent wave of “no makeup selfies” that have raised more than £2m for Cancer Research was based on a simple premise – women removed their makeup, photographed themselves and shared the image. After donating, they nominated their friends, who did the same.

The idea behind it was that removing their makeup, the women exposed their vulnerable, “real” selves, emulating the way cancer can devastate a person’s life. Despite being incredibly successful, the trend had an interesting result. Even on my own Facebook account, I saw hundreds of compliments to those going bare-faced, with men and women alike commenting on how much more attractive everyone looked. And if so, are we wrong about the perceptions created by makeup?

I was excited by this, as a recent paper of mine, in press at the Quarterly Journal of Experimental Psychology, and carried at Bangor University, examined just this question. I wondered whether makeup use, like dieting or gym workout behaviours, affected perceptions of attractiveness from same and opposite sex peers. An ideal way of testing this was to examine how much makeup is considered optimally attractive. After all, if women’s ideas of what looks good to others is accurate, then everyone should find their makeup optimally attractive, right?

To test this, I photographed a group of university students with and without their makeup, and created a sequence of ultra-realistic images of them with varying amounts of makeup on. My colleagues and I then created a computer program that allowed participants to cycle through these images and stop at a point where they found the images optimally attractive to themselves. We then asked them to repeat the study, but this time selecting the image that they thought would be most attractive for other women and men.

The results were clear. Both women and men found faces with up to 40% less makeup than the models applied themselves the most attractive, showing a clear agreement on their opinions for cosmetics. Less was simply better. However, when they considered the preferences of others, the women and men in our study indicated that they thought other people found more cosmetics more attractive, and this was especially true when considering the preferences of other men. However, this couldn’t be further from the truth. The sample of men in our study consistently chose less makeup as more attractive, while at the same time indicating that they thought their peers would find more makeup more attractive.

There was another interesting result. None of our participants, when indicating their own preferences or those of their peers, chose the actual amount of makeup worn by the models. To reiterate that: nobody thought the cosmetics worn by the models in the study was optimally attractive, and it was far in excess of the preferences of men and women.

The take-home message from this research is that our ideas about what the opposite sex find attractive are generally inaccurate, whether this refers to body size and shape, or something as simple as makeup use. These misconceptions have roots in serious psychological illnesses, and the media intensifies some of these. Perhaps images of models with airbrushed skin textures contributed to the apparent overuse of makeup in the study, though I can only speculate on that.

Whatever the reason, it is clear from both these findings and the extremely positive response to the no makeup selfies across the internet that a more natural appearance is more attractive to everyone. I hope everyone takes the positive response to their no makeup selfies on board, and congratulations on raising awareness and money for a good cause! 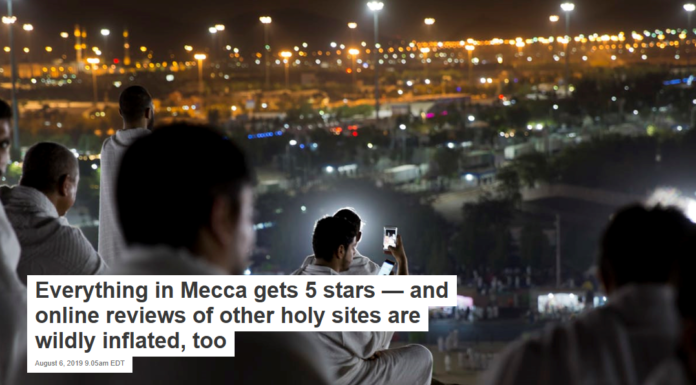 Everything in Mecca gets 5 stars — and online reviews of other holy sites are wildly inflated, too