Offshore oil and gas drilling has been a contentious issue in California for 50 years, ever since a rig ruptured and spilled 80,000 to 100,000 barrels of crude oil off Santa Barbara in 1969. Today it’s spurring a new debate: whether to completely dismantle 27 oil and gas platforms scattered along the southern California coast as they end their working lives, or convert the underwater sections into permanent artificial reefs for marine life.

We know that here and elsewhere, many thousands of fishes and millions of invertebrates use offshore rigs as marine habitat. Working with state fisheries agencies, energy companies have converted decommissioned oil and gas platforms into manmade reefs in the U.S. Gulf of Mexico, Brunei and Malaysia.

Californians prize their spectacular coastline, and there are disagreements over the rigs-to-reefs concept. Some conservation groups assert that abandoned oil rigs could release toxic chemicals into the water and create underwater hazards. In contrast, supporters say the submerged sections have become productive reefs that should be left in place.

We are a former research scientist for the U.S. Department of the Interior and a scholar focusing on the fishes of the Pacific coast. In a recent study, we reviewed the history of rigs-to-reefs conversions and decades of published scientific research monitoring the effects of these projects. Based on this record, we conclude that reefing the habitat under decommissioned oil and gas platforms is a viable option for California. It also could serve as a model for decommissioning some of the 7,500 other offshore platforms operating around the world.

Offshore petroleum platforms are designed to withstand hurricanes and earthquakes, but not to be permanent. When they reach the end of their useful lives, typically after about 25 to 50 years of operation, federal and state law require energy companies to decommission them.

This usually means completely removing the platform and submerged supporting structure and returning the seafloor to an unobstructed condition. Only in certain cases does any part of the platform remain.

These rigs weren’t designed with the intent of creating reefs, but their underwater steel pipe support systems – called “jackets” in the oil business – attract vast numbers of invertebrates that settle on them. In turn, these creatures attract diverse fish species. Together these colonies create reef systems that can resist rusting away for several hundred years.

Off California, a myriad of invertebrates coat each platform jacket. Millions of mussels, sea stars and brightly colored anemones fight for space, creating a quilt of patterns and textures. Both large and small fishes are also abundant. In some years, clouds of hundreds of thousands of juvenile rockfishes school in the depths below operating oil platforms.

Humans have sought to enhance fisheries with artificial reefs for centuries, using materials ranging from wood, rock and concrete to decommissioned ships. The idea of reefing platform jackets developed after oil and gas companies started building platforms in the Gulf of Mexico in the late 1940s. Those steel-pipe structures provided rock-hard habitat for reef fishes on an otherwise smooth seafloor, and became highly popular fishing destinations.

Installing thousands of platforms catalyzed a basin-wide increase in available reef fish species, such as the highly prized red snapper. Reef fishes moved into areas where they had previously been scarce due to a lack of hard habitat.

In the mid-1980s Louisiana legislated the first U.S. reefing option for its offshore waters. This program was designed to take advantage of fishing opportunities provided by obsolete platforms and encourage energy companies to convert decommissioned platforms into reefs. Since then, over 500 submerged jackets in the Gulf, from Texas to Alabama, have been adapted into state artificial reef programs.

Platforms generally consist of two distinct parts: the topside, or operational facilities seen above water, and the substructure, or parts below the water. To make a reef, energy companies completely remove the topside and transfer it to shore for recycling or partial reuse. In the Gulf of Mexico and elsewhere, they may tow the underwater jacket to a new location; topple it onto the seabed; or cut off the top portion and place it on the seabed next to the lower portion.

California law only allows partial removal, or cutting off of the top portion. That way the underwater jacket remains intact and in place, which is the least destructive method for the reef.

Across the Gulf of Mexico, reefed oil platforms have significantly increased the amount of available reef fish. Many have become popular fishing and scuba diving sites. In California most operating platforms are not fished, so they have functioned for decades as de facto Marine Protected Areas, providing ecological benefits for severely overfished species.

For example, scientists have found greater numbers of adult fish of some species, such as cowcod and bocaccio rockfishes, under platforms than on natural reefs. More adults capable of spawning makes it likely that more larvae will be released into the ecosystem from species under platforms than from smaller numbers on nearby natural areas that are fished.

Although some platforms have been installed and removed off of southern California, none have been reefed. Discussion of reefing, supported by many years of scientific studies in California waters, led to enactment of the 2010 Marine Resources Legacy Act, which authorized the rigs-to-reefs concept. Now Platform Holly in state waters and Platforms Grace, Gail, Hermosa, Hildago and Harvest in federal waters are undergoing initial steps for decommissioning.

This process is expensive, technically complex and lengthy. Because it requires intricate planning, oil companies are likely to consider decommissioning more platforms while they are already organizing equipment, engineering and infrastructure acquisition for the current set. Although industry will save money if a platform is reefed, the savings must be shared with the state. Reefing thus could generate funds for other marine conservation efforts.

Either total or partial decommissioning will have many environmental and socioeconomic impacts, both positive and negative. Californians have not had an opportunity to consider what should happen to decommissioned oil platforms since the mid-1990s. Now citizens have an opportunity to consider the issues again, and decide the fate of an unintended but biologically important resource. 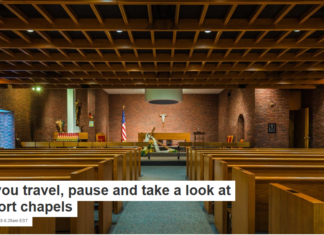 Staff Writer - January 5, 2018
Wendy Cadge, Brandeis University Traveling in the new year? It is very likely there is a chapel or meditation room tucked away somewhere in one...