When Sam Shepard died on July 27 the world lost one of the greatest playwrights of the past half-century. He was an artist renowned for bravely plumbing his own life for material, spinning much of his own pain into theatrical gold. His best work revealed the hollowness behind the idea of the happy family and its corollary, the American dream. Subversive and funny, Shepard had the soul of a poet and an experimental streak that never faded.

The American family was, no doubt, Shepard’s great subject. His quintet of family plays that premiered between 1978 and 1985 – “Curse of the Starving Class,” the Pulitzer Prize-winning “Buried Child,” “Fool for Love,” “True West” (both nominated for Pulitzers) and “A Lie of the Mind” – form the foundation of Shepard’s lofty reputation.

While researching my recent biography of Shepard, I found that most critics and scholars focused on the playwright’s relationship with his father. Rightly so: Samuel Shepard Rogers suffered from alcoholism and his only son grew up bearing the brunt of his abuse. Shepard’s family plays turn on the collateral damage of the fathers.

Less frequently examined is the playwright’s fixation on the land, and the ways in which this plays out in his work. Both as a writer and in his personal outlook, Shepard drew deeply from the old trope that nature and innocence are intertwined. And according to critic Harold Bloom, Shepard saw doom in the “materialistic and technological obsessions of modern society.”

Throughout his work, Shepard decried so-called progress, especially the rampant development of open space. Whether it was the forced sale of a family farm (“Curse of the Starving Class”) or Native Americans being driven off their reservation (“Operation Sidewinder”), it all came to no good.

To Shepard, a relationship with the land was nothing short of existential. As the playwright told an interviewer in 1988:

Shepard arrived at this impulse naturally. When he was in elementary school, his family settled in a small house on Lemon Street in Bradbury, California. An orchard of 80 avocado trees attached to the house meant that Shepard – then known by his birth name, Steve Rogers – was kept busy irrigating and harvesting the crop. He also raised dogs and sheep, and when he had free time he worked the fields belonging to his neighbors. During high school, he was an eager member of the 4-H Club and Future Farmers of America, and spent his summers tending to the thoroughbreds at nearby Santa Anita Park.

In college, Shepard’s major wasn’t theater but education. As he once wrote to a friend, back then he wanted to become a “veterinarian with a flashy station wagon, and a flashy blond wife, raising German shepherds in some fancy suburb.” He never finished college nor became a vet. Instead, Shepard left home and made his way across the country to New York City and the East Village, where he would quickly transform himself into the brightest light of the nascent off-off-Broadway scene.

But even as his reputation grew, he never left his agricultural roots behind. In fact, one of Shepard’s early one-act plays was titled “4-H Club” (1965).

Other plays from the 1960s combine his old life with his new one. Rural scenes are full of characters who talk in the hip argot of the Village streets, characters caught in an absurdist situation go “fishing” off the edge of the stage, and Native Americans, by their very presence onstage in plays like 1970’s “Operation Sidewinder,” stake a claim to the land that’s been stolen from them.

With time, the playwright would more directly address the scourge of overdevelopment that he saw happening around him. It would become a running theme of sorts, as Shepard saw the nation growing and changing – but not for the better.

“One of the biggest tragedies about this country was moving from an agricultural society to an urban, industrial society. We’ve been wiped out,” he told Playboy in 1984.

Shepard’s characters embody this loss. In “Geography of a Horse Dreamer” (1974), one character is a gambler who can predict tomorrow’s winners at the racetrack, but loses that power once he’s physically forced from his usual haunts to a new, strange locale. In “Buried Child” (1979), the land holds the answer to the play’s central mystery: At play’s end, the fallow backyard gives up a baby from a shallow grave, shining a light on the incestuous relationship that has led to the ruination of this family – as if the purity of nature had been offended by a terrible transgression. And in Shepard’s late masterpiece, “Ages of the Moon,” two old friends finally find solace by communing with nature at a small, remote campsite.

Nowhere in Shepard’s oeuvre does land play a bigger role than in 1978’s “Curse of the Starving Class.” The Tate family’s farm stands between husband and wife: He wants to unload it to pay off his gambling and drinking debts; she wants to sell it and use the money to escape her marriage and take the children to Europe. The culminating scene features the husband, Weston, coming to his senses after sobering up and walking around his property. Reconnecting with his land, Weston turns his life around, “like peeling off a whole person.”

Shepard’s love of the country and its open spaces would mark all aspects of his career. Also a celebrated actor, he favored “rural” dramas, those set on farms, racetracks or some windswept piece of desert. In his screen debut, Shepard starred as the doomed farmer in Terrence Malick’s “Days of Heaven” (1978). In his screenplay for the cult classic film, “Paris, Texas,” (1984) Shepard mirrored the desolation of the South Texas desert in the soul of his protagonist, Travis, a man suffering from a malady that Shepard often said he himself felt: “lostness.”

Shepard felt most at home traversing what one western historian called this “strange land full of mystery.” He took pride in being a western writer.

“He would call me late in the night,” Patti Smith wrote in a loving tribute, “from somewhere on the road, a ghost town in Texas, a rest stop near Pittsburgh, or from Santa Fe, where he was parked in the desert, listening to the coyotes howling. But most often he would call from his place in Kentucky, on a cold, still night, when one could hear the stars breathing…”

She knew, better than anyone, that such places constituted Shepard’s emotional and physical territory. He adored the vastness of the plains, the green of loping pasturelands; he cherished his time running the highways and byways in his pickup, or sitting next to the campfire on a real-life cattle drive, and reveled in the grit of this country’s less-traveled corners.

Shepard loved America for its beauty, its danger and its promise, forever transforming her in our imaginations. 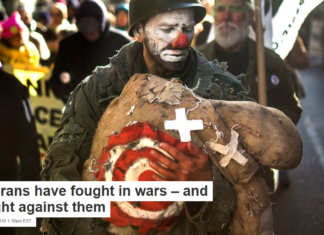 Staff Writer - November 8, 2018
Michael Messner, University of Southern California – Dornsife College of Letters, Arts and Sciences If President Donald Trump had his way, the nation would be...

Americans’ personal savings rate is near an all-time low – an...