This is not a one-off act of Russian interference. In the previous nine years, Russia has invaded its neighbor Georgia, annexed the Ukrainian province of Crimea and supported rebels in Eastern Ukraine.

As a historian of Russian history, I find the most interesting question to be this: Are these actions a sign that Russia is returning to aggressive foreign policies or are they part of an entirely new direction in Russian foreign policy?

The answer to this question is important for the U.S. and countries throughout the world. If these policies are a return to deep Russian tradition, it will be difficult to reverse Russian aggression.

To answer it, let’s look at patterns of Russian policy stretching back over three centuries.

At the beginning of the 17th century, Poland was a great power that not only meddled in Russian politics but even sent an army to Moscow in 1610 and put a Polish prince on the throne. However, Russia grew in power through the next hundred years. By the early 18th century, Russia was routinely meddling in internal Polish electoral politics. At this time, the Polish king was elected by the noblemen. Peter the Great and his successors bribed nobles to vote against attempts of the king and central government to strengthen the central government and national army.

At the end of that century, Russia, Austria and Prussia – three states that had overridden Polish noble resistance and heavily taxed their subjects to fund powerful armies – partitioned the Polish state among themselves, wiping it off the map entirely. Indeed, Poland remained part of the Russian Empire until it regained independence during World War I.

The other direction of Russian expansion was to the southwest. In 1774, Russia defeated the Ottoman Empire, a major empire that dominated the Mediterranean from Morocco through the Middle East and Turkey into the Balkans. In the punitive peace, Russia preserved a right to intervene in internal Ottoman affairs on behalf of Christians. In 1814, after Alexander I pushed Napoleon out of Russia, the tsar’s troops marched to Paris and brokered the European peace. In 1848, in an uncanny precursor to the Soviet invasion in 1956, Russian troops quashed the Hungarian noble uprising against Habsburg rule.

In the late 19th century, Britain, France, Germany and other European powers engaged in the great “race for colonies” in Africa and Asia. Russia’s imperial expansion in this era was relatively limited. Although it conquered sparsely populated lands in Central Asia, when it tried to expand in the Far East, Japan defeated Russia in a humiliating war.

The USSR tightly controlled and forced the Soviet communist model upon all of East Europe and supported communist and nationalist anti-colonial radical movements throughout the world. The Soviet Union tried to create its own alternative to the U.S. and European-led post-World War II international economic system, the European Union and NATO.

Now Russia supports nationalist opponents of the international economic system, the European Union and NATO. Although, on the surface, communism and today’s nativist right-wing populism are ideological opposites, they actually share quite a lot in common. Both reject the international status quo, normal modes of party politics, and attitudes toward facts and the media. Both are animated by an underlying hostility toward the Western world.

However, we should keep a few important things in mind before concluding that Russia is inherently or uniquely oriented toward empire and expanding its influence abroad.

First, Soviet-controlled East Europe broke away in 1989 in remarkably peaceful fashion. Two years later, the Soviet Union was dissolved by none other than the leader of the Russian Federation along with the Kazakh, Belarusian and Ukrainian leaders. Although there were a few clashes and small wars of succession, it was arguably the most peaceful and rapid dissolution of a major empire in history.

Considering the violent history of conflicts between three of the largest populations in the region – Poles, Ukrainians and Russians – it is remarkable that the area did not descend into wars of succession. The popular book “Armageddon Averted” captured the sense that the peaceful Russian acceptance of loss of empire and global influence in the 1990s was something of a miracle, especially given nuclear weapons and a massive army spread across the region.

Second, it is also easy to forget the history of the “democratic West.” Britain, France, Germany, Holland, Belgium, Spain and Portugal all built and ruled massive overseas empires from the 16th through the second half of the 20th centuries. Turkey built a huge multi-ethnic empire around the Mediterranean from Morocco to the Balkans, and Austria assembled dozens of nationalities into a major continental European empire.

The U.S. conquered much of its western territories from Spain, Mexico and Native Americans in the 19th century. It established a sphere of influence in South and Central America, where it often intervened in elections and even coups.

These empires broke apart in two waves: in the aftermath of World War I and in the decades following World War II. The breakup of the Soviet Union and its East European satellite empire is basically the last chapter in the story of this global phenomenon. Nowhere has the process of imperial dissolution been fully peaceful, and in places like the Middle East, it has been the nexus of extended violent civil wars.

The third point to keep in mind is that while Russian intervention in the U.S. election is unprecedented in the history of American elections and is rightly a cause of great concern, it is not unprecedented in the history of international relations. In fact, the U.S. has a long record of putting its finger on the scales in elections in other countries. According to a database compiled by Dov Levin, the U.S. attempted to influence the outcome of 81 presidential elections around the world from 1946 to 2000.

With these caveats, let us return to the question: Do recent Russian actions mean a return to traditional Russian aggressiveness after an uncharacteristic decade of retreat between 1989-1999?

With the exception of Syria, Russia’s interventions since 1991 have been limited to its immediate neighborhood. Meddling in elections and supporting right-wing parties in Europe and the U.S. is perhaps a sign that this is changing.

But Russia is not a rising great power as it was from the late 18th through the early 20th centuries. As a relatively weak state that is declining in relative power, its foreign policy ventures have arguably been more oriented toward winning domestic support for a regime lacking in electoral legitimacy. In this sense, perhaps recent Russian foreign policy is more like the British action in the Falklands and the U.S. in Grenada in the 1980s than the long string of Russian acts of expansion and intervention abroad during its three-century period of growth as a great power.

Every former empire has struggled to come to grips with the loss of empire, and Russia is no different. Whether it reverts to 300-year-old patterns of expansion and intervention abroad or leaves its traditions behind will be one of the big questions in international relations in the coming years. 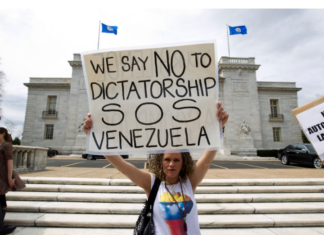