June 1 marks the official start of the Atlantic hurricane season, which runs through the end of November. It’s a busy time for us at the Tropical Meteorology Project in Colorado State University’s Department of Atmospheric Science, where we are issuing our 34th annual Atlantic basin seasonal hurricane forecast.

Our next update will be issued on June 1 to coincide with the start of the Atlantic hurricane season. Here’s a look at how we develop our forecasts.

Setting the stage for hurricanes

The late Dr. William Gray, who conducted research in atmospheric science at CSU for more than 50 years, began issuing these predictions in 1984 when he made an important discovery. He found that El Niño years, when a large zone of warmer-than-normal water develops in the eastern and central tropical Pacific, led to less active Atlantic hurricane seasons.

This occurs because El Niño alters lower- and upper-level winds in the atmosphere, producing an increase in vertical wind shear – a condition in which winds blow at different speeds and directions at varying heights. Vertical wind shear makes it harder for hurricanes to form and strengthen because it tilts the hurricane’s rotating center. This promotes mixing of dry air into the storm and inhibits the pressure drop that is required to strengthen the winds of a developing storm. La Niña, which can generally be considered the opposite of El Niño, promotes wind patterns that are more conducive for active Atlantic hurricane seasons.

In addition to El Niño, our lab uses a variety of other predictors to come up with its forecasts. We look for precursor signals – conditions in the atmosphere and ocean that preceded active or inactive hurricane seasons in past years.

Important predictors include tropical Atlantic sea surface temperatures and sea level pressures. Atlantic hurricane seasons tend to be more active when the tropical Atlantic is warmer than normal, since a hurricane gets its energy from warm ocean water. Lower pressures are associated with a more unstable atmosphere, which creates conditions more conducive for strong thunderstorms to develop. These strong thunderstorms are the building blocks of hurricanes.

Our lab constantly monitors large-scale ocean-atmosphere conditions and forecasts, but work intensifies about two weeks before we are scheduled to release one of our seasonal forecasts. Our main guidance tool is a statistical model that uses historical ocean-atmosphere patterns as well as current conditions. We also look for years in the past that had conditions most similar to what we currently observe, as well as what we predict to occur during the peak of the Atlantic hurricane season from August through October.

As we prepare our early June seasonal forecast, we are looking for seasons that had borderline weak El Niño conditions as well as a relatively warm tropical Atlantic. These seasons typically had near-average Atlantic hurricane activity.

There is always a lot of public interest in how active the upcoming Atlantic hurricane season is likely to be. While our forecasts show moderate levels of accuracy, they are certainly not perfect. In addition, our forecasts cannot tell you when or where storms are going to strike. We emphasize that these predictions are an informational tool, not a preparedness tool. The National Hurricane Center, which is part of the National Oceanic and Atmospheric Administration, issues watches, warnings and reports on individual storms.

Our project has 33 years of historical forecasts archived on our website. These forecasts can generally be characterized to have modest accuracy in early April, with improved accuracy in June and moderate to high accuracy in August. The increase in skill as the time to the peak of the hurricane season decreases makes physical sense, since you are closer to the events that you are trying to predict. A corollary can be seen with day-to-day weather predictions. A forecast for tomorrow’s weather is generally going to be more accurate than a forecast for the weather seven days in the future.

We also explain and check our work. Our group publishes an extensive forecast document on our project’s website that describes the thinking behind the numbers in our forecasts. At the end of hurricane season, we publish a lengthy verification in which we evaluate our forecasts and analyze the large-scale atmosphere/ocean conditions that actually occurred.

Many other groups issue Atlantic seasonal hurricane forecasts, including government agencies such as the National Oceanic and Atmospheric Administration, universities and private weather companies. Our group has collaborated with the Barcelona Supercomputing Center to produce a website that displays all publicly available Atlantic seasonal hurricane forecasts. The website also provides discussions of each group’s forecasting techniques as well as real-time hurricane monitoring links. Having multiple groups issuing seasonal forecasts is beneficial, as improvements in accuracy are likely to result with many individuals studying the same problem.

For example, in 1983, the Atlantic had only four named storms all year. But one, Hurricane Alicia, caused nearly US$2 billion in damages in the Houston metropolitan area.

Dr. Gray and the CSU team issued a perfect forecast for only one major hurricane in 1992, but that storm was Hurricane Andrew, a Category 5 hurricane that devastated south Florida. In contrast, our group successfully predicted a very active Atlantic hurricane season in 2010, which saw a whopping 12 hurricanes (twice the normal average), but none that made U.S. landfall. Our group at CSU intends to maintain Dr. Gray’s legacy and continue issuing Atlantic seasonal hurricane forecasts for many years to come. 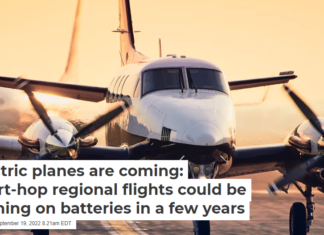 Electric planes are coming: Short-hop regional flights could be running on...

Staff Writer - September 19, 2022
Gökçin Çınar, University of Michigan Electric planes might seem futuristic, but they aren’t that far off, at least for...

Move over, corn and soybeans: The next biofuel source could be...