As Earth orbits the sun, it continually ploughs through dust and debris left behind by passing comets and asteroids. On any night of the year, a keen-eyed observer might see five, or even ten, meteors (shooting stars) per hour.

But over the next week, that number will rise markedly, as Earth moves through the centre of a stream of debris left behind by the most famous of all comets, comet 1P/Halley.

Most meteor showers have a short, sharp maximum that is best observed over a single night or two. But the Orionid meteors (which have already been active for a couple of weeks) will really kick into action this weekend, and should remain close to their peak for most of next week. Best viewing is likely on or around Tuesday evening, October 21.

Spent shards of a comet’s youth

Comet 1P/Halley is probably the best known of a vast population of dirty snowballs that circle the sun. Every 76 years or so, it swings through the inner solar system.

As it flies by the sun, ice on the comet’s surface sublimates (changes directly from solid to gas) to space. The ice carries with it vast quantities of dust and debris, causing the comet to shrink by about a metre with every apparition.

From the release of this gas and dust, as the comet sheds its skin it grows a magnificent tail and coma, making it easily visible with the unaided eye, once per generation.

The dust shed by the comet continues through space, following a very similar path to the comet itself.

Comet Halley has been trapped in its current orbit for thousands of years. The shells of dust ejected each time it has passed by the sun, have gradually dispersed. They now form a wide tube of dust, sheathing the comet’s path.

Twice per year, once in May, and again in October, the Earth runs into this debris and sparks a meteor shower.

The shower in May, the Eta Aquarids, is actually the most impressive, as Earth passes closer to the centre of the debris swathe left by the comet. This means that the shower provides more meteors per hour, as we run through thicker dust. Unfortunately, it is hard to see, and is only really visible for a couple of hours before dawn.

The October Orionids, by contrast, are visible from around midnight onwards, and can still put on a spectacular show!

Orionid meteors appear to radiate outward from a single point, just below Orion’s head. Here in the southern hemisphere, Orion appears to be doing a handstand and so it is his head that’s positioned towards the horizon.

Look towards the north-east around 1am AEDT.
Museum Victoria/Stellarium

If you look towards the radiant, the meteors you see will be travelling almost directly head-on. This makes them harder see, as their paths are short and they move more slowly across a tiny part of the sky.

Instead, the trick with meteor showers is to look slightly away from the radiant itself. This way, you catch meteors that are coming into the atmosphere at more of an angle to your line of sight, and hence leave a more impressive swift streak across the sky.

But don’t look too far away or the number of meteors you spot will drop off dramatically.

A good compromise is to turn about 45 degrees to the left or right of Orion and look about 30-45 degrees above the horizon.

As a rough guide, if you hold your hand at arm’s length and stretch your hand wide, so your fingers and thumb are as widely spread as possible, the distance from the tip of your thumb to the tip of your little finger will be around 25 degrees.

That’s the part of the sky where you’re most likely to see the best and most frequent meteors.

Orionid meteors tend to be fast-moving, as the Earth ploughs head on into the debris left behind by Comet Halley. Each grain of dust you see burning up in the atmosphere is hitting our Earth at a whopping 66km/s.

This makes the Orionids relatively spectacular – particularly those you see just after the radiant has risen. Known as Earth-grazers, these meteors can be seen sweeping across the entire sky.

During the early hours of the morning, Orion will rise higher in the sky and the number of meteors you can expect to see will increase. By the pre-dawn hours, when Orion is riding high in the north, observers at dark sites can expect to see 15 or 20 meteors per hour.

The Orionids aren’t the only meteor shower active at the moment. Whilst watching for the fast-moving Orionids, keep your eyes peeled for slow-moving, bright meteors radiating from a little lower in the sky, from the constellation Taurus.

Visible Taurids come along less frequently than Orionids, at just five or, at most, ten per hour – but they are often even more striking, and produce many bright fireballs.

A Taurid meteor blasts a trail across the sky.
Mike Lewinski/Flickr, CC BY

The Taurids come from a swathe of debris that is so broad it takes Earth four whole months to cross. Meteors can be seen in this region from September through to December.

In fact, the Earth ploughs through the same debris cloud in June and July, creating a daylight meteor shower called the “Beta Taurids”.

In other words, our planet spends half of its yearly orbit running through that debris!

Such is the breadth of the Taurid stream that, despite debris hitting the Earth in a trickle rather than a flood, it contributes more dust to our planet in a normal year than all other meteor showers combined.

If you’re out watching the Orionids and see something particularly bright or dazzling, why not report it to the scientists at the Australian Desert Fireball Network.

They have a free app (Fireballs In The Sky) which you can use to learn more about meteors, and to submit reports of any bright fireballs you might see, to help scientists find any fragments of debris that might have been large enough to reach the ground intact.

Regardless, if you’re out under clear skies this coming week, keep an eye turned skyward – and you may just see a piece of Comet Halley, or one of the Taurid meteors, go streaking past. 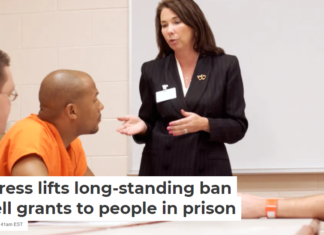 Staff Writer - December 24, 2020
Andrea Cantora, University of Baltimore When Congress decided in 1994 to ban federal student aid for people behind bars, it was part of a wider...