By Paul Kirkham, University of Nottingham

According to TechRepublic, Google produced two of the five worst tech products of 2009 – Android 1.0 and Google Wave. The fact that Google remains dominant suggests that, while not infallible, it’s rich enough to take risks and weather occasional failures.

If you are as rich as Google it’s not extravagant to allow a chosen few to spend their Friday afternoons pursuing blue-sky projects. In fact it’s within budget to go further and set up an entire facility, named Google X, that actively encourages staff to make mistakes. As Head of Moonshots at Google X, Dr Astro (né Eric) Teller, explained in a BBC interview earlier this year:

Making mistakes is how we learn, but what is the real difference between this and plain old trial and error? And has there been a genuine return on investment?

The usual notion of innovation is that a new product or service should fulfil a need or solve a problem – whether or not the end user is aware of it. We call these articulated and unarticulated needs. Bearing this in mind, let’s consider the most trumpeted achievements from Google’s secret research division: Google Glass and the Google Self-Driving Car.

Essentially, the “problem” Google glass solves is: “I keep bumping into things because I can’t take my eyes off this screen.” Other solutions to the same problem include Chongqing’s mobile phone pavement lane, or simply looking where you’re going.

In a similar fashion, the problem supposedly addressed by driverless cars is traffic accidents. This is a certainly a genuine problem, but are driverless cars really the optimal solution? A few moments’ reflection suggests myriad alternatives.

This is not to say Google’s Glass and Self-Driving Car will never find a real use (there is always the military, after all) but both bring more than a hint of solutions looking for a problem. This is a lavish approach that few of us can afford, and is a consequence of the extraordinary wealth the huge tech giants like Google have amassed.

We see this indulgent behaviour elsewhere. Google founder Sergey Brin spends a €250,000 on a lab-grown hamburger. Why? Because he can. Bill Gates helps fund a highly contentious Big History project. Why? Because he watched a glib TED talk while he was on his treadmill. And because he can.

This is just a return to the sort of philanthropy that revolved around making the broadest of assumptions from the narrowest of perspectives – specifically, one’s own – in this case predominately white, male and nerdy. It’s not a particularly efficient method of identifying and addressing the challenges facing the world. Such hobby-horse adventures are unlikely to accurately reflect the overriding concerns of society as a whole.

And this is not the only similarity with Victorian entrepreneurs: as far as the bottom line is concerned, the longer they survive the more conservative they become. Incremental, often meaningless and un-requested innovation replaces the radical. iPhone 7 or Windows 9, anyone? When Mark Zuckerberg announced Facebook would be changing its motto “Move fast and break things” to “Move fast with stable infrastructure” he was forced to concede: “It may not be quite as catchy, but it’s how we operate now.”

Where ideas come to die

So where will the next groundbreaking ideas come from? Unsurprisingly, trial and error is pretty hit-and-miss. Innovation on a whim is founded on the myth of special people with a magic touch – a myth exploded most spectacularly by Apple’s recent “gift” of a U2 album to all iTunes users on the mistaken premise that it was “cool”.

The answer seems to lie in innovation by acquisition. Thus Facebook buys Instagram; Google buys BeatThatQuote; Yahoo buys Summly; Microsoft buys Skype, and Apple buys Beats Electronics. But is this gobbling up of the smaller fish driven by a belief that they are new and exciting, or a suspicion that they pose a threat, or a fear they might be snapped up by someone else? Maybe the buying firms are even a little bit scared that the next big thing could just be the one that swallows them – as happened to MySpace and AltaVista, and many others. The recent record-breaking IPO of China-based Alibaba (which sells more goods than Amazon and eBay put together) shows not every big fish is hatched in California.

Of course there are plenty of reasons to salute the tech giants. But are they still genuinely innovative, or just spoilt rich kids? Most haven’t transitioned away from their founders yet – what happens when Young Turks grow old? Do they continue to move fast and break things, or to try and control the same entrepreneurial, radical urges that served them so well in the beginning?

If Google X is so brilliant then why did Google itself pay US$650m for two-year-old AI start-up Deepmind? It’s probably too soon to say, but at the moment it’s beginning to look like Silicon Valley is where radical ideas end up, rather than where they come from.

Paul Kirkham does not work for, consult to, own shares in or receive funding from any company or organisation that would benefit from this article, and has no relevant affiliations. 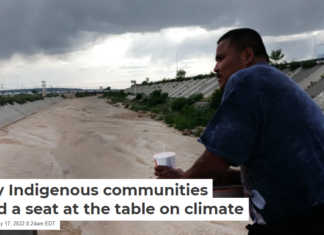 Staff Writer - May 22, 2022
Ray Minniecon, NAIITS There’s growing recognition that Indigenous communities are among the most vulnerable to the effects of climate...