By Dianna Kenny, University of Sydney

Art is a cry of distress from those who live out within themselves the destiny of humanity … Inside them turns the movement of the world; only an echo of it leaks out – the work of art Arnold Schoenberg, 1910.

Austrian composer Arnold Schoenberg, like many gifted artists throughout history, suffered for his art. Popular artists of the modern era have kept this tradition alive. For all the superficial glamour of the pop music world, let us not delude ourselves – today’s popular music scene is brutal.

The “pop-cultural scrap heap”, to borrow journalist Drew Magary’s term, is piled high with the dead or broken bodies of young musicians whose personal and musical aspirations collided with the aspirations of those occupying the commercial edifices erected around them, which turn them into income-generating commodities whose role is to satisfy capricious and ever-changing consumer demands.

Many of those musicians end up feeling suffocated, caged and possessed by their minders, exploiters and fans. And many end up dead.

How big a problem is the pop music industry, really?

[d]ead rock stars are a dime a dozen. They usually drink themselves to death, overdose on narcotics, crash cars, or get on faulty aircraft with drunk pilots …

Previous research does not answer the question

Why do so many pop musicians die young?

Few studies have systematically examined the popular musician population to ascertain the extent of the problems codified in the media comments above.

Existing studies are limited in scope. Adrian Barnett, for example, tested the “27 club hypothesis”. Tucker, Faulkner and Horvath only included a narrow sample of the population, that is, musicians who died between 1959 and 1967. A John Moores University study only looked at artists with top rating albums.

At the other end of the scale, the study reported by Howard Sounes in his book 27 is over-inclusive as it covers not only performing musicians but also songwriters, record producers, managers and promoters.

I examined four outcomes – longevity and the proportion of deaths by suicide, homicide and non-intentional injury or accident. Longevity was determined by calculating the average age of death for each musician by sex and decade of death. These averages were then compared with population averages by sex and decade for the US population (per 100,000) (see Figure 1, below).

Figure 2 (below) provides a graphical summary of percentages of musicians who died by decade from each of the three causes of death studied; these are juxtaposed with deaths in the US population from the same causes by decade. All comparisons shown in these figures were highly statistically significantly different from the US population.

The pop music scene is toxic and needs rehabilitation

This is clear evidence that all is not well in pop music land.

Why is this so? The pop music “scene” fails to provide boundaries and to model and expect acceptable behaviour. It actually does the reverse – it valorises outrageous behaviour and the acting out of aggressive, sexual and destructive impulses that most of us dare only live out in fantasy.

The music industry needs to consider these findings to discover ways of recognising and assisting young musicians in distress. At the very least, those who make their livings from these young people need to learn to recognise early signs of emotional distress, crisis, depression and suicidality and to put some support systems in place to provide the necessary assistance and care. 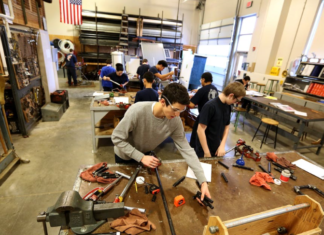 Staff Writer - February 15, 2020
Shaun M. Dougherty, Vanderbilt University President Donald Trump has proposed one of the largest increases in funding for career and technical education in recent history. As...

Why are prices so high? Blame the supply chain – and...