A cartoon can land you in court, as happened to a man recently convicted of possessing non-photographic images – cartoons, drawings – of a sexual nature featuring children.

Clearly child pornography, more accurately called child abuse images, represents horrendous crimes and should have no place in our society. Children are incapable of giving legal consent to sex or sexual posing for nude photographs, meaning each of such images is criminal and represents a crime scene itself.

While nobody will disagree that they should be banned entirely, the justification for criminalising the possession of drawn or computer-generated images that involve no real children is not so clear.

Under the Coroners and Justice Act 2009, sections 62-68 made it a criminal offence to be in possession of “prohibited images” of children. This is defined closely to require that the image is first grossly offensive and obscene, and pornographic for purposes of sexual arousal. It also requires that the focus is principally on the child’s genitals and sexual regions, or includes one of various sexual acts either with the child or in the presence of the child. It also covers images that depict sexual activity in the presence of or between children and an animal, whether dead, alive, or imaginary.

The law covers still and moving images, and can include cartoons, drawings, and manga-style images. These images are easier to find on the internet than actual child abuse images involving real children, largely due to the fact that virtual pornography is not illegal in all countries. For example, the existence of Japanese websites featuring fantasy child sexual abuse has been a concern in countries where it is illegal.

The two main justifications given by the government for criminalising the possession of these “prohibited images” was that they could be used for grooming children and could fuel child abuse by reinforcing potential abusers’ inappropriate feelings towards children. But as the Home Office’s own Consultation Paper acknowledged, these justifications were not based on any conclusive scientific research. In other words, the rationale of the law was to address a possible risk of harm to children.

Certainly risk of harm has been regarded as sufficient elsewhere, for example in the age-based restriction of adult pornography, and indeed film classification in general. But the focus here has always been on the producer and distributor of content rather than those possessing it. Strict possession offences are intrusive and often draconian in nature, and should only be used when justified by the prevention of credible harm. The problem with respect to this law governing cartoon child pornography is that it will in most cases be a victimless crime – the images are not of a real child suffering abuse.

Instead the law focuses on the morality and character of the image – that which depicts a child, albeit an imaginary one, in an inappropriate context. The difficult question is whether this offers sufficient justification to make possessing such an image a serious criminal offence when the possessor has no intent to harm a real child (the production and distribution is a separate matter and raises more serious issues).

Criminalising conduct is generally justified on the basis of preventing harm to others (after John Stuart Mill), hence why possessing real child abuse images would be a crime as they represent documentary evidence of real harm caused to children. But unless scientific evidence becomes available that establishes that possessing non-photographic images leads to physical offences, this is difficult to establish. So critics argue that the real outcome – and even aim – appears to be to police thoughts and fantasies, rather than protect real children from harm. Naturally this raises issues of privacy and freedom of thought.

The US tried enacting similar legislation almost 20 years ago through the Child Pornography Prevention Act 1996, but the relevant provisions were eventually struck down by the US Supreme Court as unconstitutional. The court felt that as there was no harm caused to real children, it merited First Amendment protection. Eventually further legislation arrived in the form of the PROTECT Act 2003, which was much more narrowly tailored to criminalise non-photographic pornographic images of children, but only if they are indistinguishable from actual images of a minor.

Perhaps the UK should have followed a similar path and drafted more specific legislation that makes possession a criminal offence based on the resemblance and likeness of the image to a photograph of a real child – something now possible with advances in 3D modelling and graphics software. This would have provided sufficient justification for the harm argument and, rather than creating a strict liability possession offence, it would have encouraged prosecution only where there is a realistic prospect of the possessor going on to cause real harm to real children.

Abhilash Nair does not work for, consult to, own shares in or receive funding from any company or organisation that would benefit from this article, and has no relevant affiliations. 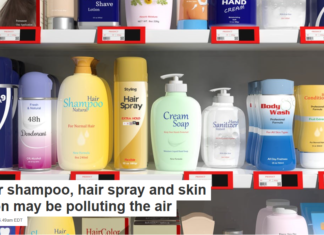 Staff Writer - May 11, 2018
Matthew Coggon, University of Colorado Millions of Americans apply personal care products every morning before heading to work or school. But these products don’t stick...